A Small Good Thing: A Documentary on Simple Sources of Happiness
By Lori Deschene 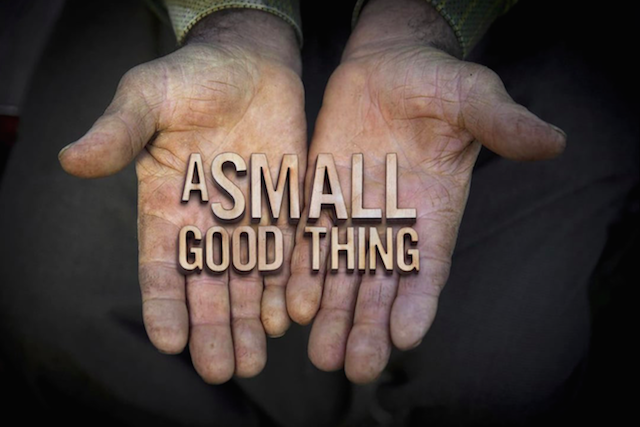 We live in a world that encourages the pursuit of happiness, which it seems we’ve collectively defined as “more.” We chase more money, more recognition, more stuff, more connections (and often, more followers and “likes”). If it’s quantifiable, and sometimes even when it isn’t, there’s no such thing as enough.

Given that you’re here, visiting a website that promotes simplicity and appreciation for the little things, it’s possible you haven’t fallen into this trap. Or perhaps, like me, you have, and that’s why you now recognize that less is often more.

Given my own experience chasing things that inevitably led to emptiness and disappointment, I was intrigued to learn about Pamela Tanner Boll’s new documentary A Small Good Thing.

A Small Good Thing follows six people who’ve “recast their lives so they can find a sense of meaning.” If you’re disillusioned by the American Dream and fascinated by people who’ve found their own unique path to happiness, I highly recommend you check it out.

I’ve never shared a documentary here before, but as you may remember, I’ve spent the better part of this year working on my first short film (which I’m excited to share here soon!) And I’m also planning to work on my first documentary, on a similar topic, next year.

Given the synchronicity, I was thrilled to speak to Pamela about the motivation behind A Small Good Thing and what she learned in the process of making it.

How did you choose the cast for A Small Good Thing? What’s the common thread?

Stephen Cope from Kripalu’s Institute for Extraordinary Living in Lenox, Massachusetts introduced us to Tim Durrin, who was working at Kripalu at the time, and through mindful practices (yoga, meditation, cycling) had been able to deal with his struggles with Post Traumatic Stress Disorder (PTSD) and addiction.

I met Yoga and Breathing Instructor Mark Gerow at Canyon Ranch in Lenox and was very impressed with his story of how he used his yoga practice to overcome the personal struggles in his life and to learn how to share his story with others.

We were introduced to Jen and Pete Salinetti from Woven Roots Farm and were fascinated with the fact that they were able to harvest twelve months out of the year in Western Massachusetts, as well as with the amount of food they were producing on a one and a half acre farm.

Also, we learned about Sean Stanton who worked on both his family farm, North Plain Farm, as well as managed Blue Hill Farm for the Barber family. He was also giving back to his community as the Chair of the Selectman Board for the Town of Great Barrington.

Finally, I heard about a woman in Pittsfield MA who was doing amazing community work with young adults who performed all over the state with the Youth Alive Step Team. I met Shirley Edgerton for coffee and found out that she was really guiding young people to a life of purpose.

Why did you choose the Berkshires for the location of this film?

The Berkshires has long been a place that attracted artists, visionaries, and change-seekers who value their creative expression and want to live closer to nature. It’s also one of those communities in the world that supports and encourages people who want to live in a different way. There seems to be less importance put on “keeping up with the Joneses” and more importance on “checking in with the Joneses.”

While we focus on the Berkshires in the film, people who are practicing mindfulness, connecting to the natural world, and engaging in their communities can be found all around the world. Yoga studios, farmers markets, and community gardens and centers can be found all over New York and other urban settings.

We also filmed in the Berkshires because it was closer to home for us. Our production company is located in Winchester, Massachusetts, right outside of Boston.

How long did it take to make this film? And how did making this film influence the happiness in your life?

We begin in 2011 researching the film for over a year focusing on the recent happiness studies and the science behind yoga and meditation. We also did a lot of research on how living in closer connection to the natural world also positively impacted our well-being.

We began shooting in the Berkshires in 2012, and continued for over a year. The first edit, which took another year, was flat and disjointed. In December 2013, I made a decision to close down the production. I did not feel that the edit expressed my original vision.

After four months, I found a new energy to complete the film in a new location with a new editor, T.C. Johnstone.

In the making of this film, we all learned that living an authentic life is not easy. It’s hard to be vulnerable and to make mistakes. But this is the path to living a life that is meaningful and full of purpose. Like Shirley says in the film, “…the true success in life is you finding your purpose and your passion and you living it out.”

How does watching these small stories about individuals transforming their lives help us to transform the world?

Our culture is more invested in comfort than in truth. Our planet is suffering from our consumer-driven way of life. Although we have more connections through the Internet and social networking, we as a society have become more isolated and lonely. We have more material wealth, but we are not happy.

These stories show individuals who are making small changes in their lives that have a big impact in the world. Jen and Pete Salinetti use only environmentally sustainable practices at Woven Roots Farm. Also, Sean Stanton feeds his livestock a natural diet; his cows are grass fed and his pigs and chickens are raised on pasture and eat all certified organic grain.

Farms that use these types of regenerative agricultural practices can turn back the carbon clock, reducing atmospheric CO2 while also boosting soil productivity and increasing resilience to floods and drought. Also, the agronomists tell us now that you can produce more calories per acre on a small farm than a big one.

Studies show that mindful practices such as yoga and meditation relieve our stress: blood pressure goes down, heart rates drop, negative emotions decrease, and positive ones increase. Tim Durrin and Mark Gerow have overcome the struggles in their lives by applying these mindful practices every day. And in doing so, have learned that by exposing their struggles to their community, they feel less isolated and more blessed.

And finally, Shirley Edgerton is guiding her young adults to live a life of purpose. She is teaching them at a young age, “that if you leave yourself open that you move with the universe [and] that’s where you blessings coming in.” This is how we can live in a more engaged way, a way that helps us to develop empathy and compassion.

Why did you make this film? What resources influenced your research?

A few years back, everyone I talked to had the same complaints: People were running so hard to keep up with the pressures of life that they felt overwhelmed, isolated, exhausted, and unhappy. Even though our country had more material wealth, people were depressed.

Given the additional worries about the growing income disparities, climate change, and the vanishing natural world, the question of what makes a good life became important to me. So, I did what I usually do—I read lots of books. These are just some of the books that informed the film:

Born to Be Good: The Science of a Meaningful Life by Dacher Keltner

The Empathic Civilization and The Third Industrial Revolution by Jeremy Rifkin

The How of Happiness by Sonja Lyubomirsky

Being Happy by Tal Ben-Shahar

Loving Kindness: The Revolutionary Art of Happiness by Sharon Salzburg

The Art of Happiness by His Holiness the Dalai Lama

The Wisdom of Tuscany by Ferenc Mate

You can learn more about A Small Good Thing here.