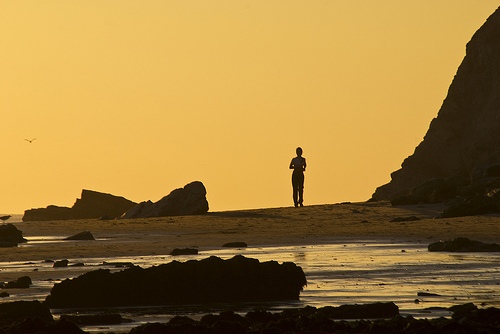 There I was in January, on the floor, physically and emotionally. From the outside, I probably looked like every one else attending yoga class off Robertson Blvd. that Sunday morning, but to me, on the inside, especially within my heart, I was in shambles.

And then, there was a moment I had not expected.

The waterworks came as I heard the teacher say, “Sometimes, you feel as though you are riding the bicycle backwards. You feel like you are backtracking and heading in the wrong direction, but really what’s happening is contraction and release. The universe is preparing you for something much greater and like a sling shot, it’s going to shoot you forward—you just have to move backwards for a little bit.”

I looked over at my roommate, eyes welled up with tears of disbelief and quickly thought to myself, “I’m an independent, successful woman and I get to control what direction my bike ride is going. So listen up universe, get me off this backwards bicycle, pronto!”

I felt a temporary sense of relief for 90 minutes or so. Then, upon my walk home, my heart was breaking again.

Why the sorrow? I spent the majority of 2011 really clarifying what I was looking to get out of life: success, giving back, a loving relationship, traveling the world. For the most part, I was successful in these pursuits.

I completed my 30th Birthday Build for Habitat For Humanity in honor of 9/11. I had been able to cross bi-coastal living off my bucket list and returned back to the home base of LA. I had even started to pick up a few new clients and began exploring additional revenue streams. Sounds good, right?

What also happened is that I got used to getting everything I wanted and set out to achieve.

I got used to things working on this magic time frame—put it out there and it will happen exactly as you planned and wanted it to happen. I can hear you thinking, “Um, ok—so what’s the problem with that?”

Nothing, other than I had total disregard for divine order and divine timing.

That all changed when one thing I thought I wanted most in 2011 officially came crashing down like a ton of Jenga blocks and my inner critic and ego had a field day with me.

We’ve all been “there” before—whether it’s missing out on the job of your dreams, the trip of a lifetime, or the soul mate you spotted in the produce section of the grocery store.

We set our intentions and eyes on something, we believe the outcome will be a certain way and when things don’t go quite as planned, it’s a bummer!

You see, on the one hand, I wanted to be true to the intentions I put together for myself in 2011 (recall from list above). But in order to be true to myself, I had to let go of something that was very dear to me at that time.

And there I was in yoga class, questioning my decision, thinking, “Did I do the right thing? If it was the right thing for me, then why am I so terribly sad?”

I couldn’t accept that what had passed was over, that I had to live in the present and not play reruns over and over in my head. Have you had one of those replays with yourself before? It’s painful.

You want to trust your instincts and decisions that you make for yourself, yet your present state of being and heart have a conflicting opinion. The doubt over my decision was torture.

I spent the rest of January trying to shake my off my disappointment (in between crying myself to sleep or bursting in to tears—in the shower of all places).

I wanted to trust that the wise words of the yoga teacher would come true, that the universe was preparing me for something greater. And then toward the end of the month, things started to happen. It took four weeks of crying and doubting—not even chocolate, yoga or red wine could save me.

But the more I gave in to riding the bicycle backwards and embracing my temporary sadness, the more the universe started rewarding me. It was the strangest thing.

Here I had spent most of my life fighting for what I needed and making sure I got it.

My parents divorced when I was in high school so I started working in ninth grade. The majority of my life, I had always set out to do what I needed to and got the results I wanted because I had no choice; I had to take care of myself.

It was mind-blowing to think that, when I gave 150% of my effort to try and make something work and failed at it miserably, I would be rewarded. But it was true.

First came the opportunity to create video content for my business with a respected production team. I had wanted to work with them for such a long time and the universe handed me an opportunity, just like that!

After the videos came the execution of a highly successful client event in LA with six days notice. I started getting my confidence back.

Then came a travel opportunity for business, followed by making new contacts, which lead to a new client. Then I won a contest and was rewarded with some healthy, free prizes.

My point is that all of the sudden, the sorrow was gone and had been replaced by new experiences which were taking me personally and professionally to the next level. I could feel a progression, a new sense of responsibility and it certainly felt good.

The tears were replaced with smiles. My focus shifted from the past to the present and future. My mentor even told me, “Learn to be like a frog. They can’t jump backwards; they can only jump forwards. Leave the past in the past. Leap ahead.” And so I did.

Then another unexpected incident occurred on March 8th. I lost my grandmother. All my life, she had been my source of inspiration, light, love—my role model.

Here was another incident that I couldn’t control. And rather than mourn, and cry and throw myself into hysterics, I accepted the opportunity as contraction and release. Nothing will ever replace my grandmother, but now that she’s my guardian angel, I have no doubts at the wonderful things to come in my future.

And so, I write this to say that when times are tough in your head and heart, believe and trust that whatever darkness and disappointments you are going through, you will survive.

Remember the principles of contraction and release, of riding the bike backwards. The journey is never a detour; it’s just a way to build up your momentum and strength for the road that lies ahead.

Trials and tribulations—not getting what we want when we want it, saying goodbye on terms we can’t control. Each of these is the universes way of humoring us, of helping us grow and allowing us to reframe the past from a place of gratitude for our present and our future.

So brace yourself when the road gets bumpy, strap on that helmet, and prepare to pedal backwards for something greater is sure to come. Learn from yesterday, live for today, hope for tomorrow.

Jaclyn Mullen is a social media marketer, philanthropist and strategic connector. She is currently developing an e-book & motivational community, Startups and Stilettos™, which helps women “dig their heels in” and breakthrough personal and professional plateaus to obtain lives and careers they truly desire.

Embrace Fear and Find Your Center: Riding With No Hands