Surviving Life’s Storms: Have Hope That Life Will Carry On
By Stephanie March 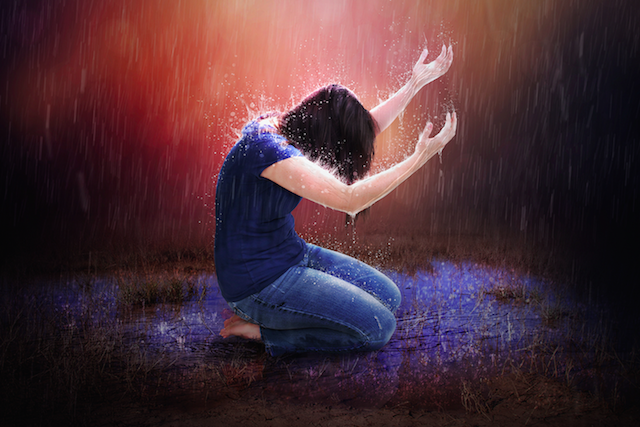 “I’ll never know, and neither will you, of the life you don’t choose. We’ll only know that whatever that sister life was, it was important and beautiful and not ours. It was the ghost ship that didn’t carry us. There’s nothing to do but salute it from the shore.” ~Cheryl Strayed

When I was in college, I met a boy a month after arriving on campus. I was eighteen, naive, and completely in love. The red flags were there by the truckload. As each red flag appeared, I darkened the tint on my blinders and convinced myself this was the person I was meant to be with. And so,  the storm began.

About a year later, Mother Nature unleashed a storm of her own on my college town and surrounding areas. It was a hurricane that didn’t seem like a big deal as it meandered through over the course of a day or two.

The morning after the storm I woke up at 5:00 and couldn’t figure out why. My pets, two dogs, and three cats were running around in a panic.

I got up to see what the fuss was about, and that’s when I smelled the rancid floodwaters. I peered down the stairs of my loft apartment, and to my shock realized half of the front door and several stairs were completely submerged.

The night before I had laughed at the puddles and bit of street flooding. Now those puddles had amassed and invaded my home.

I woke up my sleeping boyfriend. He angrily waded down into the water and tried unsuccessfully to open the now swollen shut front door. As he announced that we were stuck, I picked up the phone to call for help and heard the entire building lose electricity. It was audible and eerie. Everything went quiet.

We ran to the windows and saw some people across the street moving belongings out of their not yet flooded apartments. Quickly, we opened the windows and screamed for help. Two guys came over, waded through the water to our door, and helped my boyfriend get it to open. I instantly began walking around grabbing things and putting them back down.

I was in complete shock and had no idea how to pack, what to pack, and what to leave behind.

First thing, we got the animals out of our apartment. I led my scared and yelping dogs through the water, which was about waist high on my small frame.

My boyfriend carried the cats over his head in a carrier. I found a place willing to board them that still had space available and returned to my apartment.

I packed clothes, photos, cards, and special items I knew couldn’t be replaced. We put the TV on top of the refrigerator. Some kind strangers floated by in a boat and rescued the computer I used for school. A few friends showed up to help us carry the garbage bags I packed to dry ground. Eventually, my boyfriend left and went with his friends.

I was alone and the floodwater kept rising.

I took as many trips through that water as I could. I was terrified and determined to save as much as possible.

A fireman arrived and warned a group of residents that dams had burst in other parts of the state and soon the waters would be too high for us to walk through. He urged us to leave, reminded us that it was just stuff. “But it’s my stuff” I replied, my throat filled with tears.

I looked at his high-waiters and equipment and begged him to help. He wouldn’t.

Eventually, my boyfriend came back for me and what I had managed to put on dry ground. The water had reached my chin and it was time to let go, to accept that I could save nothing else.

The months after the flood were incredibly difficult. The water rose over fifteen feet on my building alone. Entire towns were destroyed, lives forever changed.

I stayed in a hotel and with family while I contacted FEMA and the Red Cross and looked for a new place to live. Many students quit college because of the flood, but I didn’t even entertain the idea. I was going back. I would start over, somehow.

Once I found a new place to live, we moved in and slept on an air mattress. We went to food banks and stood in line for free canned goods and bread. I was humbled in those moments more than I had ever been in my life. I felt alone, scared, and poor. I wondered if my life would ever be normal again.

With the help of groups like FEMA and the Red Cross, I was able to get furniture. My car was flooded out and I had to get something new. I reveled in these bright moments and felt my heart nearly burst with gratitude.

School started up again and I returned to classes. I was still struggling financially, and had lost most of what I owned, but I had what was important to me. I leaned on school counselors when I needed to and tackled my mental health. I knew getting my anxiety and PTSD under control was paramount to moving forward and finishing my degree.

I was proud of what I had been through and the newfound determination that couldn’t so easily be washed away. Life wasn’t exactly as it was before, but it was normal again, a new normal.

Eventually, I graduated and ended up in graduate school. To say I was proud would be an understatement. My boyfriend moved with me, and I thought that finally the storm between us would subside as we began our new, more responsible lives. At least that’s what I told myself.

And, like all storms, ours had an ending. After over a decade of me tolerating his severe physical, mental, and emotional abuse, I finally told him it had to end. Things were obviously never going to change. I could no longer keep wearing those blinders.

When that relationship ended, I was truly devastated. It was another hurricane that left me wondering if my life would ever be normal again. We kept seeing each other on a regular basis, and I knew I would never cut ties with him if we kept living in the same town.

People often ask me if I regret not finishing my degree and if I will ever go back. My answer for a while was yes. I didn’t want to accept that I had not completed the degree. I was someone who finished college despite a flood, after all.

But as time passed, I accepted it for the reality that it was. I had made a decision and I had to live with it. I chose freedom from a toxic and harmful relationship over finishing a degree. I knew in the end only one of those would truly save me and it meant starting over. Again.

Starting over after that relationship wasn’t easy but I had weathered a flood. I had practice. Slowly I rebuilt with the pieces left and the perseverance that guided the way. I went from being too embarrassed to ask for help, to humbled at the help received, to completely grateful for all of it.

The key for me in both hurricanes, the flood and my relationship, was to know that life would go on after the storm subsided. To breathe through the anxiety and remember that I had survived that far for a reason and would continue to long after these storms were memories.

Find your bits of light in the storm and cling to them. It doesn’t matter how small it seems. Find it and be thankful and watch it expand to a new horizon.

Always remember that you deserve a stable, hurricane-free view. And if walking away feels scary, ask yourself what would hurt more: the pain of letting go or the pain of staying stuck in the storm forever?

You, dear reader, can do this no matter what storm it is you are facing. Choose the life away from the hurricane and wave goodbye to the one you didn’t choose from the shore of your new normal.

Woman in the rain image via Shutterstock

Stephanie March is a writer, survivor, and advocate. Find her on Twitter or at her blog.