Take a Chance: Seize That Opportunity in 4 Steps
By Caroline McGraw 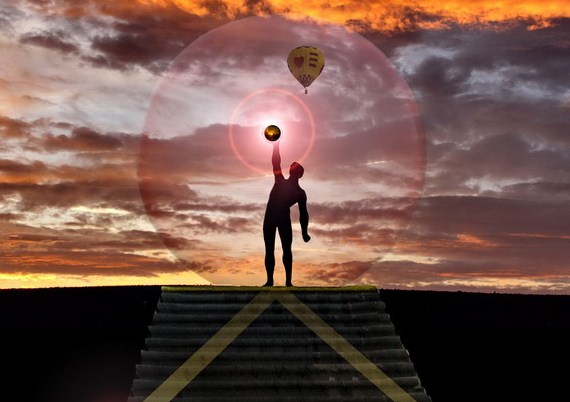 “It’s not who you are that holds you back, it’s who you think you’re not.” ~Unknown

Have you ever paused at a podium, feeling your hands shake as you speak to the senators before you? Have you ever laced your skates, shuddering as you heard your name announced as the next skater to compete? Have you ever found out about an amazing opportunity (say, a chance to post on Tiny Buddha), only to realize that you’re terrified to try?

I’ve been in all these risky scenarios, so I know how intimidating they can be. By definition, risk-taking doesn’t guarantee that you’ll attain your desired result. However, there are a few things you can do to optimize your chances of succeeding when an opportunity comes your way.

1. Get yourself prepared (and keep your eyes open).

Malcolm Gladwell said it in Outliers, and I’ll say it again:  It takes time to achieve expertise. To be precise, it takes about 10,000 hours of practice to become a true proficient. This is no small investment of your life energy.

As such, it pays to spend time thinking about the kinds of opportunities you want to prepare yourself for.

If you’re an advocate, what do you want to say to those senators? Start saying it now, even if you’re speaking to an empty room at first. If you’re a figure skater, what elements do you want in your Olympic program? Start practicing those elements every day.

Once you have seriously invested yourself, and have discerned what kind of opportunity you’re looking for, keep your eyes open, because opportunity has a strange way of showing up once you’ve prepared. Said opportunity may be unexpected (the best ones are), but if you’ve put in the time beforehand, you can seize the opportunity when it arises.

2. Realize that you’ll never be totally prepared. (In other words, you may fail.)

Even if you’re a professional figure skater who has put in 10,000 hours of ice time, it will still feel terrifying to take the ice for your Olympic short program. You don’t know what will happen. Case in point: You may hit a rough patch and fall flat.

However, it’s worth noting that many a short-program snafu has turned into long-program gold. As sports writer Robin Ritoss notes, “The short program has long been seen as where competitions have been lost—not won.” In other words:  Most of the world will see a stumble as a reason for you to give up.

You can choose see a screw-up as a reason to hope, an opportunity to grow. The best skaters take a fall and keep going with a smile. They have the ability to consider the audience perspective.

It’s tough to smile right after you’ve made a mistake, but think of it this way:  Is there anything an audience loves better than a good comeback? As author Mark Batterson writes, “Our best days often start out as our worst days. And our greatest opportunities are often disguised as our biggest problems.”

This is also an excellent time to…

3. Anthropomorphize the critical voices (and then put a lid on them).

In Bird by Bird, Anne Lamott shares an ingenious method for coping with the critical voices in your mind (the ones that say “I can’t do it” and “You’re ridiculous to even try.”) Your critical teachers (and the not-so supportive friends you may have had) are all in your head when you’re trying to seize an opportunity. Instead of letting their negativity reign, try to:

“…isolate one of the voices and imagine [it] as a mouse. Pick it up by the tail and drop it into a mason jar. Then isolate another voice….And so on….Then put the lid on, and watch all these mouse people, clawing at the glass, jabbering away…”

This exercise helps you to mute the volume on the voices that don’t serve you. Now that you’ve got the critics taken care of…

4. Put up a fight and believe. (Let your second self have a turn on the dance floor.)

If you want to influence a senator’s vote, win a gold medal or guest post on an amazing blog, you cannot allow doubts and fears to drag you down. You have to let something else guide you.

What is that something else? Well, that’s you, actually. As Juan Ramón Jiménez writes: I am not I. / I am this one / walking beside me whom I do not see… / who will remain standing when I die.

In other words, your scared, fearful self isn’t the only ticket in town. You have another self, one that relishes intensity and newness. You have a self that’s ready to seize the opportunity you desire.

As Martha Beck, Ph.D, writes in Steering by Starlight, “Scholars…who study human happiness concur that we are most centered and blissful ‘in the zone’ when we’re intensely focused on something that is almost too hard or too scary to do…”

Feel the way it makes your fingers tingle, the way it guides your feet to unexpected thresholds. Chances are, that second self will be the one turning the knob when opportunity knocks.

Caroline McGraw is the creator of A Wish Come Clear, a personal development blog that gives you carte blanche to change your life. Visit and receive free copies of her three digital books, designed to support you as you make mistakes, fall down, and dare to rise again. You can also follow her on Facebook and Twitter.