Take Off the Mask: 6 Tips to Be More Authentic
By Patricia Thompson 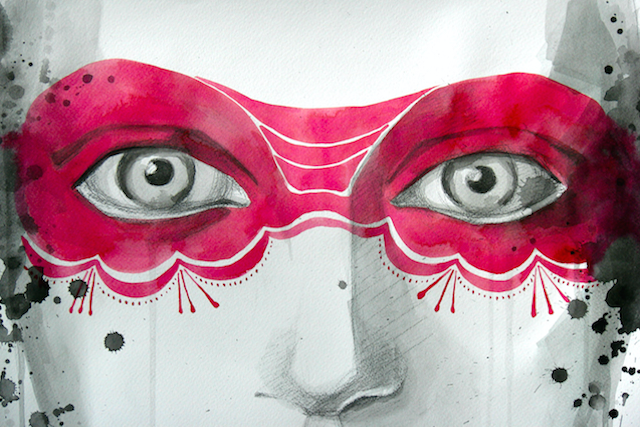 “Being who you are is another way of accepting yourself.” ~Unknown

Years ago I struggled to be authentic. I was a consultant who worked with senior people in big organizations. As a black female fresh out of graduate school, I was frequently the youngest, the only woman, and the only minority in the room.

Because I was so different from those around me, at least on the surface, I was concerned about how other might perceive me. So I put a lot of effort into portraying myself in ways that I thought would increase the odds of others accepting me.

To make sure others wouldn’t underestimate me, I led with my intelligence, saying things to let them know how smart and knowledgeable I was and downplaying my fun-loving side.

To make sure I wasn’t seen as militant or overly sensitive, I stayed quiet in response to comments that ranged from a little over the line to blatantly offensive.

To make sure others felt at ease, whenever I was asked to talk about myself, I stuck with the most innocuous and middle-of-the-road stories that I knew were most similar to the other person’s life experiences.

And here is a small, but classic example: Even though I had been yearning to own a snazzy smartphone case for years, I stayed with a neutral black one so I would be seen as suitably conservative instead of too girly or flamboyant. (Yes, I had it bad!)

The irony of all of this was that, although this approach caused me to be seen as someone who was bright, competent, and capable, it didn’t exactly help me forge deep connections with other people.

After all, how could it? The person they were connecting with was only a tiny fragment of who I was and, in some cases, a completely inaccurate portrayal.

When I reflected on it, I realized that, while it was convenient to be able to say that I was behaving that way due to the demands of being in an unwelcoming corporate environment, the truth is, I did it in other places as well.

Every time I agreed to do something I didn’t really want to do out of a sense of obligation, I was being inauthentic.

Every time I didn’t ask for what I needed in a relationship, I was betraying myself.

Every time I put on an aura of having it all together when in reality, I was feeling vulnerable and scared, I was putting on a mask.

One day, after biting my tongue for the nth time at work regarding an innovative idea I had that I thought others wouldn’t agree with, I decided enough was enough. At that moment I committed to stop hiding “this little light of mine” under a bushel.

Instead, I was going to unleash my true self into the world.

Okay, perhaps unleash is a little inaccurate—it’s not like I became Sasha Fierce over night. But what I did do was take what felt like little risks in displaying my authentic self.

I experimented by being more assertive and sharing my true opinions.

I let my humorous side come out and told funny stories about my family and my life when I was at work.

I said no to things I didn’t feel like doing—even a party that was going to be thrown in my honor that I didn’t really want to attend.

I put a hot pink rhinestone case on my smartphone.

So, what happened? Honestly, not much on the negative side of things. There might have been the odd person who felt a bit of discomfort in the moment when I disagreed with him, but it certainly wasn’t anything long-lasting or life-shattering.

Instead, the results have been overwhelmingly positive.

I feel lighter and more true to myself. I have deeper relationships, because it’s as if a veil has been lifted, and the people around me get to see who I really am. I’m more likely to get my needs met because I’m not relying on the other person having ESP to figure them out.

And at work, instead of making others uncomfortable, being more authentic allowed me to build deeper connections. Instead of just seeing me as a brain in a jar, others began to see me as a whole person, a thought leader from whom they could learn, who had interesting things to talk about.

It has made all the difference in my life and created a richer, happier, more fulfilling existence.

If you are struggling to let your authentic self shine, here are some tips you might find useful.

1. Imagine your older self sharing life lessons with you.

Imagine your older self having a conversation with your present self. Perhaps this older version of yourself is on his or her deathbed, and s/he is giving you advice about how to live a fulfilling life.

What would s/he say to you? Would s/he suggest that you spend the rest of your life dulling your shine, or would s/he tell you to be true to yourself?

2. Check in with yourself.

If you have been behaving inauthentically for a long time, you might feel out of touch with your true feelings and desires. Journal and meditate to get back in touch with yourself.

Allow yourself to feel your emotions, and be curious about them. What are they telling you that you need to do? How can you become more of your true self?

Commit to taking small steps toward being more authentic. Speak up about things you normally wouldn’t. Assert yourself. Ask for something you want. You don’t have to transform yourself overnight. Recognize that it’s a process.

4. Be prepared for others’ reactions.

Remember that others are likely unaware of the extent to which you might be stifling yourself. So, as you behave differently, recognize that they may need to adjust to the new you. While the responses I got were overwhelmingly positive, sometimes others didn’t quite know what to make of it. That’s okay.

5. Don’t use authenticity as an excuse for bad behavior.

I have worked with some clients who have been rude or disrespectful to others, and explained it away, saying, “I’m just being honest” or “I have to be authentic.” You can be authentic and kind at the same time. Be respectful.

6. Recognize you can tolerate discomfort.

Research shows we tend to overestimate how long and intense our unpleasant feelings will be in response to a negative event. So, even if others don’t respond positively to everything you do, know that it probably won’t be as bad as you are anticipating.

Finally, keep in mind this wonderful quote by Oscar Wilde, “Be yourself; everyone else is taken.”

Why Self-Compassion Is the Key to Being Our Authentic Selves

How to Live Out Loud: 8 Lessons for an Authentic, Empowered Life