Thanking the Thankless: A Little Praise Can Go a Long Way
By Holly Archibald 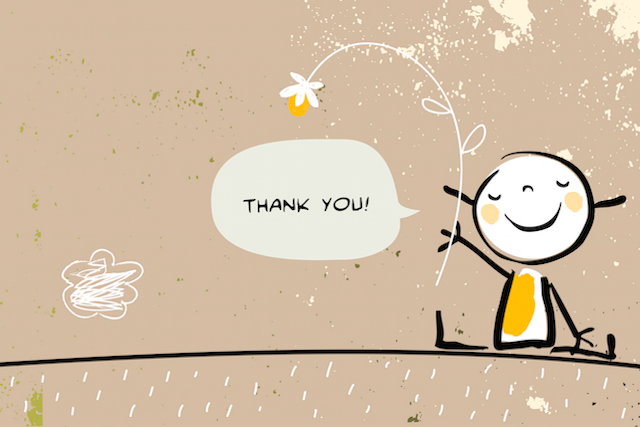 “The roots of all goodness lie in the soil of appreciation for goodness.” ~Dalai Lama

The school bus driver that I had throughout elementary and middle school was invariably grouchy. She was gruff and intimidating; she had a look affixed to her face that could best be described as a perma-scowl. As far as I could tell, all of the kids on the bus were afraid of her.

And so it perplexed me each year on the last day before Christmas break when my mom handed me a box of chocolates for me to give to my bus driver as a gift. But she’s so mean, I’d think to myself. Still, I followed my mom’s directions.

The first time I handed the bus driver those chocolates, she was totally surprised by my mom’s thoughtfulness, and I was left awestruck by the unfamiliar grin on her face. Her hardened exterior seemed to melt right in front of me.

Each year after that, I came to look forward to the occasion when I could see my bus driver transformed into a smiling, grateful, pleasant person—and to know that my mom’s kindness sparked that reaction in her.

Over the years, I began to understand what my mom already knew—that this bus driver wasn’t really a mean person. She was just somebody under a lot of stress from working a difficult and thankless job.

In college, I worked briefly as a customer service representative at a call center for a popular television provider. Never before had I realized how degrading people can be when they are frustrated, and how they may take it out on the first person they speak to.

My boyfriend, who also worked at the call center, was once called a terrorist by a guy who was unhappy with his bill. But no matter how irate any given customer was, when the conversation ended we had only a few seconds before the next call came in and we’d go through the process again with somebody else.

Stressful as they were to me back then, I know that the jobs I’ve held barely register on the scale of difficult work done by a multitude of employees with thankless jobs. I couldn’t last longer than a few months at the call center, though I knew workers who were there for years, working hard to provide for their families.

When we stop to think about it, it’s easy to see how many people work to make our lives better and easier. Just think about buying your groceries, as an example. There are farmers that grow our food, truck drivers who haul our food to the store, stockers who arrange the food on shelves, and cashiers who ring it up.

Once you get started, it’s difficult to stop thinking of people who work to improve our lives.

The teachers who taught us to look at life in a new way. The librarian who introduced us to our favorite books—the books we turn to when we need insight or a little pick-me-up. The mail carrier who delivers the birthday card from your grandmother.

The nurse who calls you back with the test results. The musician who wrote the song that pumps you up with enough swagger to nail that job interview or to ask out that guy. The booth attendant who sells you cotton candy at the fair (because, hey, it’s cotton candy!).

The bus driver who made sure you got to elementary school safely.

One day a few years ago, while reading Deepak Chopra’s The Seven Spiritual Laws of Success, I was reminded of my mom’s empathy towards my former bus driver.

Chopra writes that when he was a child, he was taught to never go to anyone’s house without bringing them a gift—even if the gift was simply a note, a compliment, a smile, or words of thanks.

Chopra expands upon his childhood lesson, encouraging readers to “make a decision that any time you come into contact with anyone” that we should give them something.

Later that day while waiting in line at the grocery store, I began to think about how many people that grocery cashier sees on any given day. Some customers are friendly while others don’t seem to even acknowledge that the person behind the cash register is an actual human being.

Then I thought about how this particular cashier seemed to go above and beyond. He was always helpful and friendly. He asked if people needed assistance to their car.

Once I even saw him at the store without his uniform, seemingly on his off-day, adjusting the mats in the doorway so that they were easier for others to walk on.

I remembered Deepak Chopra’s advice to give to everyone we meet. I smiled and thanked this cashier, then went home and wrote a letter to the store manager detailing what a good worker this particular cashier was, and strongly recommended giving the guy a raise.

I hoped, at the least, that my letter would give the cashier some much-deserved recognition.

The more I thought of people to thank, the more people I realized I was thankful for. Suddenly I felt indebted to so many people.

I wrote a thank you letter to an old high school teacher. I wrote to my mail carrier. It was so gratifying that it verged on addicting.

Aside from writing thank you letters or expressing gratitude, another way of showing appreciation for those who serve you is to compliment them. Start paying attention to whether your restaurant server, taxi driver, or laundromat attendant has or is doing something that is worthy of some admiration.

Calling your attention to this will most likely evoke a smile and make them feel humanized.

You are letting them know that you don’t just view them as some background object crunching numbers, reading scripts, or scanning barcodes. They are human beings who are servicing you, and you appreciate it.

When we thank those that are often engaged in thankless work, we not only help them feel appreciated and respected; we also connect with that which is more human and compassionate within us.

A 2012 study from the University of Kentucky showed that people who practice gratitude are more sensitive and empathetic, and less likely to respond aggressively toward others.

Because, really, who wants to be the guy on the phone yelling at the college-age kid and calling him a terrorist because your bill (which he didn’t make for you) is higher than you want it to be?

It’s so much more satisfying to be the considerate person who thinks to give a box of chocolates to a bus driver. And, thankfully for us, there are so many people around, working behind the scenes to make our lives better, that are worthy of thanks.

Thank you image via Shutterstock

Holly Archibald is a writer, music lover, and travel addict with a weak spot for big, friendly dogs and movies starring Dolly Parton. You can follow her on Twitter (@hollsthesmalls).