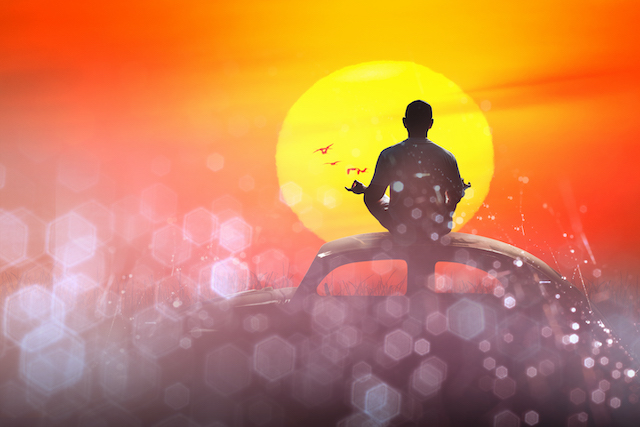 “You don’t have to control your thoughts. You just have to stop letting them control you.” ~Dan Millman

One of the paradoxes of learning to cope with anxiety is that it often means you’re prepared for chaos and crisis. When everyone else is thrown by the uncertainty, you’re strangely at home because it is not as far from your day-to-day lived reality as it is to their’s.

I often joke that at a time of crisis, people with anxiety are like early adopters of the iPhone; we’re like “See, this is exactly what I’ve been telling you about!!! It follows you everywhere; it seems innocuous at first and then slowly, but surely it ruins your life.”

Whether it’s the overwhelming sense of fear and dread about anything and everything, obsessively running over hypothetical scenarios, or waking up the middle of the night furious with your partner because they have the audacity to be able to sleep soundly through the night, we get it.

For me, this journey started in 2015, after I quit six jobs in four months.

Eventually, a friend suggested this wasn’t normal and that I should speak to a therapist. I did, and I was told the good news was that I probably wasn’t as bad at my job as I thought, and the bad news was I had an anxiety disorder. Given my ongoing fear of looking incompetent, it’s a trade-off that I’d probably almost still take.

Over the next two years, I read every blog, listened to every podcast, and tried every gimmick to help wrestle back any semblance of trust in my ability to win the increasing arguments I was having with my self-belief.

One of the biggest things about living with anxiety is knowing that it never goes away, but you can learn more productive ways to cope with it.

At a time of crisis, a lot of people will say, “We’re all in the same boat,” which I don’t think is accurate. We all get forced out onto our individual lifeboats; some of us are in rockier waters than others, some are lucky to have literal personal islands to retreat to.

As a stand-up comedian with anxiety, I have the benefit of being forced to put years into maintaining and improving my metaphorical lifeboat. From breathing techniques and isolation pods to hardcore psychedelics, I’ve taken them out into the lifeboat, seen it sink or swim, learned from that, made it better, and made it more comfortable.

For those of who are new to these troubled waters, let’s take a short crash course into the things you can do to help manage your anxiety.

It’s worth noting, these aren’t the only things you can do, and not all of these will be helpful to everyone, but these are the tools I turn to most often.

I know, I know, it’s cliché. I spent most of my twenties rolling my eyes at what I thought was hippie nonsense. And, even today, long after having discovered the benefits of meditation, I still cringe when I hear someone assume that because I am an advocate of meditation, I must also believe in crystals or star signs. And, I still can’t stand people pretending that meditation means you’ll never feel unhappy again.

But meditation does work. In particular, learning to let the early discomfort pass—to settle in and observe the restlessness and feel it naturally subside—is like weight training for your brain. Once you can do that, it is so much easier to accept that some things are out of your control and wait for them to pass.

Chaos can cause you to want to do everything and nothing all at once. It’s like trying to run faster to the finish line when you’re already exhausted. You want to do anything, anything at all to claim back a sense of control, but often, that just results in you feeling boxed in by the fact that you can’t always control everything.

When I’m anxious, I scramble for things to take up my time, make lists of lists I need to make. Somewhere in my subconscious, I think my belief is that “surely one of these things will work.” On the other hand, work done in a panic is less likely to be strategic or done well. That can add to a sense of hopelessness that is demotivating.

A routine can be the difference between spiralling and getting up and getting on with it, in the best way. Sticking to a routine means when things get hard, your muscle memory can kick in and take over.

For me, this means getting up at a regular time, maintaining standard working hours (even in times of unemployment), setting aside time to meditate and run at a regular schedule. All these things help me tick things off my to-do list without ever having to think about it. And, the feeling of achievement definitely makes it easier to expand beyond your schedule.

When it’s really tough, you can go one step further and list your tasks even if it’s “watch something new on Netflix” and “go to bed at a reasonable time.” Seeing things crossed off the list isn’t just satisfying, it’s also a great way to keep track of the fact that things are getting done as time passes.

Write things down, you’ll be glad you did.

It’s amazing how important a pad and a pen are to me as a comedian. I have always been in the habit of writing half-hour stream-of-consciousness per day. Exploring freely on paper is often the best way to churn out things deep within your psyche that you’d not thought yet, and that can make for great jokes.

The practice has evolved into something that is much more therapeutic. It allows me to express myself as often as I need to, without boring anyone with the same repetitive thoughts, and often allows me to understand the things I’m thinking that are linked to the emotions I’m feeling.

Remember to stay in touch.

It’s easy to assume that we all know how each other is feeling, but sharing it still helps. On that note, go a step further and check in on people, even people who might not expect you to do so. It’s always nice to know someone is thinking of you, and reacquainting yourself with an old friend, or getting to know a new one better, can often be a spark that leads to great positivity.

The medical professionals know their stuff.

Sleep, exercise, drink enough water. It’s all easy to forget and just as easy to neglect. The number of times I find myself in a horrible rut, only to backtrack and realize I’d been eating, drinking, and sleeping poorly, is bigger than I care to admit.

So do the basics and your mind will thank you. Also, if you find yourself having sleep problems, exercise and minimizing your drinking can help. Lastly, talking to a mental health professional can be life-changing, and I highly recommend it.

As you get to know where your head is at, you will notice certain things risk setting you off more. Make a note of these triggers and be ready to learn new ways to respond to them.

For me, avoiding macro level news helps. I don’t avoid all conversation of whatever topic I’m bothered by, but I don’t actively seek it out and try to steer the conversation into the bits that affect me and the people I’m talking to personally.

For example, while I don’t run away from conversations about the COVID-19 pandemic, I definitely avoid any long-term speculation. I don’t find it helpful; in fact, I find it overwhelming. Instead, I try to keep any conversation tied to how I am currently doing, with the restrictions in place.

It’s likely to be different for you, but whatever your triggers are, know them, avoid them where possible, and be ready to respond when not.

Don’t lose your sense of humor. Laughing about a shared struggle can be incredibly cathartic; it’s why I love comedy and how I got into it. Don’t feel guilty for wanting to laugh and being able to find humor in tough moments.

I’ve always found it helpful to learn from people who’ve traveled the path I’m on before me. And, when it comes with dealing with the uncertainty in a time of crisis, people who have developed coping mechanisms for dealing with anxiety are seasoned travelers.

And while no amount of blog posts from well-read, worldly, and totally modest comedians can ever prevent you from experiencing moments of crisis in your life, learning and implementing the steps above may just help prepare you to deal with them when they come.

Anthony Jeannot is a stand-up comedian who has spent the last decade taking a test-and-learn approach to anxiety management with the help of a professional therapist. His debut stand-up comedy album can be found on Spotify here. He can be found on Facebook, Instagram, Twitter, and on his website.