The Beauty of Being Single: 6 Benefits of Solitude
By Lauretta Zucchetti 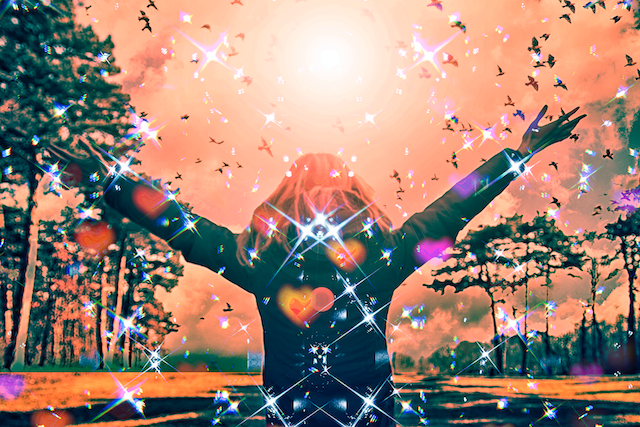 “I never found a companion that was so companionable as solitude.” ~Henry David Thoreau

Shock. Rage. Sorrow. Excitement. Terror. These are just a handful of the emotions one experiences in the aftermath of a separation or divorce. Emotional rollercoaster? It’s more like being hit with the speed and velocity of a bullet train.

I should know. After twenty-five years of marriage to a kind and accomplished man, I found myself alone.

We had more disappointment than hope, more unease with each other than affection and contentment. As difficult as it was to recognize the wrong turns we’d made in our two-plus decades together, we both realized that it was time for each of us to draw a new map.

While my husband remained in the home we had lived in together throughout our marriage and the raising of our daughter, the path on the new atlas of my life led me back to Italy, the country of my birth.

In retrospect, it was far easier to relocate to somewhere radically different from the place I’d called home for thirty years than it was to sit with the equally radical emotions aroused by separating from the person who knew me best.

Once the bags were unpacked, the boxes unloaded, and the small apartment I’d rented in the heart of Rome redecorated, I had to contend with the alien feeling of a naked ring finger and a heart full of pain.

The relief of our separation—no longer would I have to tiptoe around the mounting frustration and disenchantment between us—was short-lived; the rush of excitement at the idea of “a fresh start” evanescent as a shooting star.

With a job from home, only a shoebox of an apartment to tend to, and no wifely duties, motherly chores, or social commitments, I had only one thing to do and one place to go—and that was inward.

It was lonely in there. Where, I kept thinking, was that rock-solid husband of mine who was ready to jump onto the roof at a moment’s notice when the gutters overflowed?

Who would take care of me when I was sick, keep me warm when I was cold, ease me into sleep when I had insomnia? Who would share the beauties of life with me?

How could I live if I didn’t have a partner to love?

I was in profound disbelief (it wasn’t really over); angry (how could my husband let me go?); worried (would I end up begging for scraps of food in Piazza Navona?); ashamed (I should have tried harder); resolved (I’d get him back and we’d make it work), and adrift (life was pointless).

But then resignation arrived, and with it, a certain, glorious freedom. I was divorced, not dead. The questions I had? It was akin to asking a well where I could find a drink of water. And in their absence, new ones arrived: Who were my neighbors in the eternal city? Which interests could I develop? How could I create a routine that nurtured my values? And how could I march in single file?

As I began navigating life alone, I discovered that, while enormously different, a great deal of solace and satisfaction can be found in solitude. If you’re going through a similar transition, consider the following benefits of flying solo:

1. Your imagination will soar.

It’s true: Creativity emerges from quiet and an open agenda. Having long been a writer—but also a wife, mother, homeowner, and full-time corporate executive—I long ago learned to write against distraction.

In my new space, where the only distractions were those I created, my imagination was provoked in ways that I hadn’t experienced since I was a child. Without time- constraints and working to the tune of a television show I wasn’t watching, I found myself freer on the page, more productive, and thoroughly content daydreaming about a daydream.

If thinking of a long, unstructured weekend day fills you with the blues, use it to your advantage. Creative expression, whether through writing, drawing, or dancing, often proves to be cathartic for people.

Paint your way through anger, redecorate a room to lift your mood, or spend an hour imagining the places you have the freedom to explore in your new, unencumbered state.

2. Your life will become entirely yours.

Responsibilities have always been a large part of my adult life. From commuting to the office to hosting dinner parties for my husband’s colleagues, rarely did my former schedule allot much time for what I—and I alone—wanted to do.

In the absence of these duties, I found a surplus of time, energy, and excitement to pursue my passions. A candlelight yoga class? An art-house film on a Tuesday that would have been otherwise dedicated to household chores? Cocktails on a school night? Yes, yes, and yes, please!

I discovered the deliciousness of creating my own schedule and following what called to me rather than what was expected of me—and you are wholly free to do the same.

What fell by the wayside during your relationship—friendships, hobbies, unread novels, moving to the city of your dreams—are exactly where you left them. Only now you have the time and devotion to give them the attention and energy they deserve.

3. You will learn self-reliance.

While I was the master of my own life, I was also the one solely responsible for making sure that such a life worked.

Going from a dual income to one was daunting at first—until I recalled the gift I had for budgeting pre-marriage, which allowed me to buy my first apartment before I turned twenty. A leaky faucet, a flat tire, a frustrating day? I bought a toolset and watched YouTube videos, befriended our local mechanic, and learned that Rainer Maria Rilke was entirely right when he said that no feeling is final.

The more self-reliant I became, the more confident—and happy—I felt.

4. You will befriend yourself.

With only myself to please and take care of, I embarked on a new relationship—with myself.

I was tentative at first, much as one is when they first start dating someone new. Would I like a glass of cabernet out of habit because it’s what my husband often ordered, or did I think a Viognier might be a better fit with this dish? Would I like to stay at home and take a bath, or venture out to a café with a newfound friend?

The more I began treating myself with the kindness and attentiveness I showed toward my husband and daughter, the more I got to know myself on a deeper, truer level, realizing how much of what I did and what I ate and how I acted was an act of either submission or compromise.

If you’re in a similar position, listen to your needs, honor your wants (within moderation), and tune in to what your heart is telling you. The more you take care of yourself, the better equipped you will be to deal with the conflicting emotions your newfound single status has likely stirred.

5. You will learn the art of a healthy inner monologue.

Marriage and motherhood don’t leave much room for listening to one’s inner voice—there’s enough noise as it is. Alone, I was introduced to a whole cast of inner players I had silenced out of necessity for years. Some of these voices were unkind—judgmental, condescending, or tempting me in unhealthy directions—but with time and practice, I learned to conduct inner dialogues that were loving, beneficial, and illuminating.

As you set out alone, give yourself the time and space to listen to the voices inside of you. Silencing those that are cold or self-sabotaging will allow you to hear the tenderness and determination of others. And, with time, you will cultivate an ability to listen to what is best for you—and the backbone needed to ignore all the rest.

6. You will find peace with your past.

Those first few months alone were ripe with recrimination. If only I’d done this; if only he’d done that. How could I have done this; how could I have done that? I was reprehensible, a failure, destined for a future of take-out alone and two too many cats. But, again, with time (a true salve for most things), I realized that the old adage is true: Everyone we meet comes into our lives for a reason.

My marriage was not so much a failure as it was a stepping stone on my journey. I had lost, but I had also learned.

If you’re bearing similar grief, consider compiling a list of what you have gained rather than focusing on what you’ve suffered; what you look forward to rather than what you miss.

If you’re anything like me, you’ll find that the greatest lesson of all is that the person you were looking for was right where they were supposed to be all along: within.

Lauretta Zucchetti’s work has been featured in numerous publications, including Maria Shriver’s The Shriver Report, Literary Mama, Blog Her, Lifehack, A Daring Adventure, and Grown & Flown, as well as in NOTHING BUT THE TRUTH SO HELP ME GOD: 73 Women on Life’s Transitions. An author, life coach, and motivational speaker, she splits her time between Italy and San Francisco. www.laurettazucchetti.com