The Healing Power of Nature: How Walking in the Rain Saved My Life
By Suzanne Falter 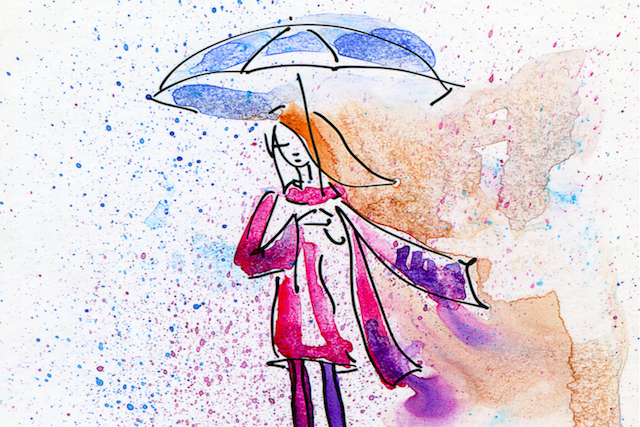 “All truly great thoughts are conceived by walking.” ~Nietzsche

A recent study by the National Academy of Sciences found that a ninety-minute walk in nature slows our worried, troublesome thoughts about ourselves and our lives. Even better, it reduces the neural activity in parts of the brain linked to mental illness.

On the other hand, if you spend your time walking down city sidewalks, don’t expect much. The science says you’ll have no change whatsoever in your neural activity. Or even in your thoughts about yourself.

This means that if you’re inclined to be anxious, depressed, grieving, or harried, go find the nearest nature trail.

But I could have told you that.

I road tested this concept at the very worst moment in my life, in the year following the sudden death of my daughter. At the time my life had fallen apart completely. Not only had my daughter just dropped dead from a medically unexplainable cardiac arrest, but a few months earlier I lost my relationship and the home that came with it.

I’d also recently closed a successful business that had pushed me to the point of burnout. So not only did I need to grieve, I needed everything to grind to a halt. Then I needed to do a radical reboot of my entire life.

Unable to fathom how to even begin, I found my way north to the country. Once there, I moved in with a friend.

A nearby park with rambling blackberry lined paths beckoned to me—even in the rain soaked northern California winter. Unable to even keep two thoughts in my head at the time, the only thing I could do was to walk.

Every day, I would pull on my rain gear and my big rubber rain boots and walk along the park’s muddy trails for hours. It was a rough and tumble place, but it was beautiful, as well. More importantly, I was alone out there as I slowly memorized every dormant blackberry bush, every rain puddle rut, and every sweeping field of grizzled grape vines.

Sometimes I sobbed as I walked. Sometimes I smiled at the pileup of bittersweet memories that poured through my body. Sometimes unexpected ideas would pop up for things I wanted to write, or places I wanted to go. Sometimes I’d remember lost wisps of memory from my childhood, things once said to me or stories I’d been told.

These walks became nothing less than a time of reckoning.

Most of the time, I just needed the active motion of my legs pumping and my feet moving through the mud. I needed to feel my feet on the ground in order to somehow get a grip—and to be reminded, perhaps, that everything would eventually be okay.

By the time summer came, I knew every path, every rock, and every tree. Gradually, my grief began to lift as my walks in nature gradually worked their magic.

I felt held out there by something bigger than myself. More importantly, I reveled in the sheer predictability of my surroundings. It was important that I walked in this park, at this time, down these paths every day. In the absence of a job, walking these trails and letting my thoughts and feelings pour through me became my work.

Turns out there is science behind my random decision to hike in the rain.

Stanford University researchers have found that walking of any kind—outdoors or on a treadmill—increases our ability to hatch creative ideas. Yet, they’ve also found walking in nature actually produces the most high-quality, unique ideas. Not only that, the effect lasts when you sit down to do your work afterwards.

I happened to have proof for this as well. Because as I walked, ideas would descend on me. I’d stew over things that bothered me. But then I found myself plumbing those experiences for some sort of meaning or lesson learned. As I uncovered these insights, I realized I needed to share them. So I began to unravel the mystery of what was to come next.

Each day as I came back to our house, renewed and rain-soaked, I would I sit down at my computer. Then I’d write through what I’d discovered. By the following fall, I was working again in earnest. The ideas that had drifted into my consciousness as I walked now fomented into something real and tangible. So, slowly, I began again.

These days I live in a city, though I still walk several times a week. But researchers say that’s okay, too.

Just a stroll in a nearby park will help to clear your head. Yet, if you can’t get to the park, views of green space can also help. Simply gazing out a window at nature has been proven to yield better memory,

This could be why the first thing I did every morning during that bleak period was to spend several moments just looking at the meadow behind my friend’s house. In the winter, a natural pond would pop up, becoming home to all manner of visiting birds.

The scene was simple and serene, and it was so beautiful to see a white snow goose come flying in and land to take a drink. Little did I know my neurons were appreciating this as well.

The NAS study suggests that having access to nature may become increasingly critical to our mental health as the years go on. All I know is that I now rely on a regular walk to carry me through my day. And not just any walk.

I walk where there is natural beauty, even if it’s the small lake in the middle of my city. I’ve found it to be nothing short of a healing miracle. This truly is one that anyone can enjoy.

How I’m Healing the Vulnerable, Rejected Kid Inside Me