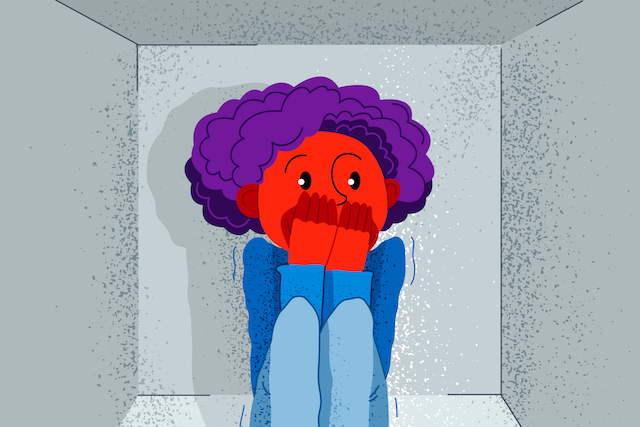 “I learned that courage is not the absence of fear, but the triumph over it. The brave man is not he who does not feel afraid, but he who conquers that fear.” ~Nelson Mandela

A few years ago, I attended what most people with social anxiety would call a nightmare event—a wedding.

Although I was surrounded by familiar faces because it was my cousin’s wedding, I was also surrounded by dozens of people I didn’t know.

It really was a tremendous weekend looking back. I got to enjoy a wonderful round of golf at a beautiful course with my family. The reception was beautiful too, cooks served us amazing food, and the speeches were riveting and moving.

Yet, what should’ve been a fun-filled weekend turned into a troubling memory because of one decision.

After the wedding ceremony was over, it was time for the post-ceremony festivities. This involved the bride and groom doing their traditional first dance as a couple together, followed by the rest of the attendees joining the dance floor. As my cousin and her new husband finished their dance, everyone predictably moved to the center of the dance floor to get in on the fun.

As this was unfolding, familiar feelings started to bubble up in my conscious mind—fear, dread, and flat-out panic.

My breathing got quick, and my heart started skipping beats. I felt completely paralyzed, not wanting to move or do anything that would draw attention to myself.

Eventually, my defense mechanisms kicked in. I walked about fifty feet into the lodge where everyone was staying and went up to my room. As I sat down on my bed, I convinced myself that the trip up to my room was a temporary release.

“I’m tired, I just need a break and then I’ll go back down.”

After about fifteen minutes, I looked out the window and had a clear view of everything that was happening just 100 yards away.

I saw my cousin and her husband with huge smiles on their faces as they enjoyed probably the best night of their lives.

I turned my gaze to the left and saw my other cousins right next to them. They were just as excited, dancing their heart out without a care in the world about how they were perceived by the people around them.

Everyone seemed to be having the time of their lives. Of course, everyone except me.

I was busy fighting an internal battle about whether or not to go back down and join the reception. Fifteen minutes of going back and forth turned into thirty. Thirty minutes turned into an hour.

After a little over an hour of sitting on my bed and feeling ashamed that I wasn’t downstairs with the rest of the crowd, I got a text from my cousin saying, “Where are you?”

That was the knockout punch for me. He wanted me to come down and feel what he was feeling—pure joy and excitement at an event that is known for delivering nothing but.

But I couldn’t. My habits and self-defeating thought patterns had taken over.

I sent him a text back, “Sorry, bro. Having some really bad stomach issues up here. Won’t be back down for a while.”

At that point, the decision had been made. I changed out of my suit and tie, threw on some pajamas, and went to bed.

The next morning brought even more anxiety. I knew that several people were going to ask me the question, “Where were you last night?”

Due to suffering from debilitating social anxiety, I was pretty well practiced at making excuses for my absences.

Only a couple people asked me, but every time they did the reply was the same: “I had some really weird stomach issues last night and was going back and forth from the toilet to my bed. It sucks cause it sounded like you guys were having so much fun, and I wanted to be down there with you!”

I knew it was a total fabrication, but I delivered it like it was the truth. My beliefs were so corrupted that I could actually feel myself believing every word that I uttered.

It was on that day—July 18th, 2019—that I made a resolution to take control of my social anxiety and keep it from turning my life into one lived in quiet desperation.

How I Overcame My Social Anxiety

Those of you who suffer from or have suffered from social anxiety know how crippling it can be.

Up until that wedding, it had negatively impacted almost every aspect of my life.

My dating life in high school and college was non-existent because I was too afraid of being rejected and routinely doubted my own self-worth.

I had a decent social circle, but I didn’t really feel like I had deep personal connections with my friends. Not to mention the fact that I was terrible at keeping in touch with them.

I was invited to plenty of social events, but I’d routinely make up excuses to stay at home. When I did go out, I’d spend so much time in my own head that it was hard to let loose and enjoy myself.

Yet, after a lot of painstaking, private work, which involved facing my fears and getting out of my comfort zone, I was finally able to get rid of my social anxiety.

Perhaps that isn’t the right phrase to use. Here’s a better explanation: I’m at the point in my life now where my social anxiety doesn’t stop me from doing the things that I want to do.

It’s impossible to rid yourself of fear completely, but it is possible to build up your courage muscle so that you take action in spite of it. That’s exactly what I did, and I’ll share with you the exact steps I took to do so.

Most people who try to change some aspect of their life aim way too high.

You have to realize that if you’re struggling to take action to fix some part of your life, the solution isn’t to set big goals. Chances are they’re going to overwhelm you and stop you from taking action.

What you need to do is embrace the power of small, subtle shifts in your identity.

For example, when I started my journey, I knew that I was starting from ground zero. I had no motivation to talk to strangers and had avoided rejection my entire life.

So, for a whole month, I committed to one simple habit—walking out of the door of my apartment.

That’s literally all I did. I didn’t force myself to talk to anybody—that came later. As long as I walked outside, I considered that day a win.

Eventually, I built on this habit and started saying “Hello” to people that walked by. After getting comfortable with this, I started giving out compliments to strangers.

If someone was dressed particularly nice, I’d say something like, “Hey, I really like that shirt.” If someone had a cool hairstyle, I’d say, “I hope you tipped your barber well because that’s an awesome haircut.”

Once this became routine, I worked up the courage to start conversations with random people. I didn’t care whether or not the interactions were awkward, simply starting the conversation was considered a win in my book.

Eventually, I got to the point where I wasn’t a complete train wreck in social interactions and knew that more challenging demands were ahead.

So I stepped things up a notch and began to embrace what people with social anxiety fear the most –public rejection.

I started voluntarily exposing myself to situations where public embarrassment was a requirement.

I forced myself to go to busy streets and do things like lay flat on my back for thirty seconds.

I went to malls near my area and skipped like a little kid through the entire mall.

During conversations with people, I’d purposely try to come across as a complete weirdo by talking really fast or really slow.

Putting myself in situations where I’d undoubtedly be judged by others freed me from the burden of the opinions of other people, and that’s when things really started to turn around for me.

It might feel difficult to adopt this same attitude when we’re around the people we care about. After all, the opinions of those we’re close to hold significantly more weight than those of people who we’re never going to see again.

But here’s the thing, most of the social anxiety we feel is predicated on fear of rejection. It’s the daily practice of facing this fear that gives us the inner confidence to carry it into all aspects of our lives.

Learning to embrace the discomfort of judgment and rejection helps us feel comfortable in our own skin. It makes it easier for us to be our most authentic selves when we prove to ourselves over and over that we can handle the potential embarrassment that comes with uncomfortable situations.

Facing rejection daily gave my brain new evidence that I was the type of person who could handle it regardless of the source.

That’s not to say I wasn’t a little more “on my toes” when talking to friends or family, but because I felt less self-conscious, I was able to get out of my head and be more curious and present in those interactions. And it all started with voluntary exposure to rejection.

The habit of getting comfortable with the uncomfortable started a tremendous ripple effect.

Striking up conversations with people in line became a habitual behavior as opposed to something I had to force myself to do.

Attending social gatherings no longer filled me with a sense of dread. For the first time ever, I actually looked forward to nights out with my friends instead of feeling terrorized by everything that could go wrong.

Now look, I’m not here to tell you that I’ve won the battle against my social anxiety. It’s one that’s never-ending, and I’ll be fighting it for the rest of my life.

However, for the first time in my life I can wake up each day knowing that it doesn’t have the power over me that it once did.

The seed of every monumental change is a single, tiny decision that seems insignificant in the moment. We often overlook this fact because we’re attracted to the idea that change results from making one big decision that allows everything else to fall into place.

We watch movies where characters undergo life-changing transformations in the span of two hours and believe that our life is supposed to work the same way. The truth is that my life changed when I committed to a small, daily discipline that was laughably easy—walking out the door.

The goals you want to achieve are yours for the taking if you have the courage to aim low enough. If you’re willing to humble yourself and commit to the small changes that don’t seem like they matter, prepare yourself for the inevitable compound effect of those decisions.

Start small. Slowly build yourself up. And most importantly, don’t stop.

If you commit to these three things, you can change anything you want about your life.