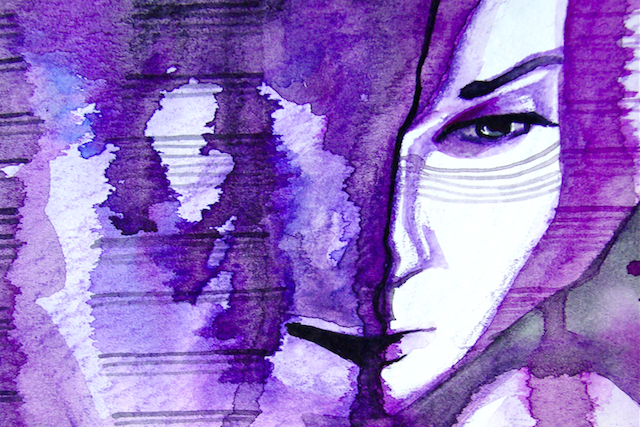 “Change is the end result of all true learning.” ~Leo Buscaglia

I cringe writing this. I have eaten so much humble pie that my pants don’t fit. This was a really hard lesson to learn.

I had a forgiveness problem.

When I was a kid, I learned to say sorry when I messed up and forgive other people when they did. With three sisters all two years apart, I got plenty of practice in as a kid (we all did).

It was a pretty standard routine:

1. Someone would mess up—say something horrible, lose something, break something, or hit someone.

2. The other person would get upset or mad and possibly cry.

3. We’d both take a little bit of time, and one or both of us would admit doing something bad and apologize.

4. We’d forgive each other.

We got pretty good at this routine. Our fights didn’t last very long—maybe a day or two at the most. We didn’t hold grudges and we weren’t punished for long periods of time.

My parents made it safe to tell the truth.

“Are you the one who backed into the garage door?” “Did you break that pot?” “Did you put your sister down the washing chute?”

These were scary questions sometimes, but not too scary.

It was safe to be honest. In fact, our parents made it pretty clear that lying was by far the more abhorrent option, and always thanked us when we told the truth. There was punishment but also forgiveness and love. When you have the bouncy bag of forgiveness to fall back on, telling the truth is far easier.

So I kept this with me as I grew up. When people were hurtful or insulting or inconsiderate, I didn’t take it too personally and didn’t hold grudges. I tried to see it from their perspective; I just assumed whatever they did had nothing to do with me or they had things going on in their life. Or I assumed they were trying their best at the time.

I thought of myself as quite a forgiving person. I may even have been proud of it. It felt like a talent. I thought it made me empathetic and easy to get along with, powerful, and free.

I bounced fairly easily and got good at saying sorry when I messed up. I also expected other people to be as good as me at forgiveness too—and if they weren’t, I would shake it off as their issue: “That poor person clearly has issues,” I would think. It made me feel bigger than the other person for having being able to turn the other cheek. (Why are the alarm bells so clear in hindsight?)

I was good at forgiving myself too. And I messed up a lot—not only with other people but also for myself. I would tell myself, “It’s okay, let’s try again. You’re doing okay. Everyone messes up.”

This was particularly useful in not bashing myself up about food. When it came to eating, I often didn’t treat myself with the most respect.

If you have an eating disorder, often you want to get better… tomorrow. Every time you mess up, you promise yourself (meaning it too) that next time you will do better. But also, it doesn’t matter too much when you don’t do better, because you will try again the next day. Always the next day. Never in the moments that it counted.

I got good at moving on pretty quickly. Moving on, but not up.

Self-righteous people are so unattractive. And I crashed and burned. The universe knocked me flat on my ass; it chewed me up and spat me out in itty-bitty pieces.

I found myself standing in front of a judge in court and acknowledging that I had pinched an ex-boyfriend, who had taken out an apprehended violence order.

Bad breakups are bad by definition; this one was traumatizing. But beyond that, being in court was a pretty shocking experience. It took a long time and a lot of work to sit with the reality of what was happening; it felt like being in a zombie movie. Or The Truman Show.

It was incredibly surreal. A pinch and I was in court? I had always thought of myself as a nice, honest, upstanding person—pretty empathetic and chilled out. I had always had healthy relationships and breakups previously.

How the hell did I end up there?

Many reasons, but one was I had a forgiveness problem.

I had forgiven that guy so many times for bad behavior, and had compromised myself so often in doing so—always trying to demonstrate the love that he didn’t seem to see, until I felt so downtrodden and disrespected that I snapped and pinched him.

When I was sitting there in the spew, I read something by John Demartini in The Breakthrough Experience: “Anything you feel guilty about, you repeat; and anything you forgive, you keep attracting to your life. Forgiveness is a self-righteous illusion that makes someone bad or wrong and then presumes to judge and pardon. Apology is judging yourself, and both are guaranteed to perpetuate whatever you judge.”

I sat there and looked around at my life, at the chunks of spew. Oh, I thought.

Forgiveness—expected and given willy-nilly—if it is too easy, that can mean you can miss the lesson.

It can mean you don’t make the change.

You don’t up your game, you don’t alter the gear, you don’t recognize the necessity for more effort, more time, more learning, changed behavior—either from yourself or someone else. You go back to doing the same thing over and over again; staying stuck in the same habit, the same place. You don’t grow; you stagnate. You continue unhelpful habits.

If someone hurts you or you hurt them, and it changes nothing about either of you or your relationship, you or they are likely to be hurt again. Pain can help to figure out what went wrong, what boundary was crossed.

Easy forgiveness can sometimes mean you put yourself back in the way of the bus that just mowed you down, making yourself vulnerable to disrespect from yourself and others—bullies, people who take advantage of you.

These people might see you hurt and feel guilty, and want you to make them feel better about it by letting them off the hook.

Easy forgiveness also means you didn’t have to try anything new. Never mind that sometimes you need to go to the new or scary or hard to fulfill your potential.

Forgiveness is sometimes the easy way out

I had a forgiveness problem.

And not only did I allow crappy relationships with other people, but also with myself.

I wanted to eat better, but didn’t.

I wanted to get better at hobbies—dance, fitness, plaiting my hair—but needed to set aside space in the day to practice.

I wanted to be respected, but had to start respecting myself, do things I respected, and stop putting up with disrespect—from friends, boyfriends, and myself.

I wanted to get better grades, but I needed to read and respond to the critical feedback; put the time or effort into figuring out what went wrong.

I wanted to create, but needed sit down and plan, dream, and put the effort in.

My forgiveness problem left me stuck. It allowed me to stay on my ass. It made me vulnerable to my own laziness and fears, and manipulation, disrespect, and emotional abuse—from others and myself.

I was susceptible to a narcissistic relationship that left me half the person I had been before, tiring on my friends and family, distracted from what I wanted in life, a fairly broken sense of trust, truth, my own abilities, and a Section 10 on my record.

I was caught in a puddle of spew with so much anger at the injustice, and incredulity that forgiveness was not going to cut it anyway.

But holding onto guilt, anger, fear, betrayal, and hurt is horrible. It feels horrible. Especially the big kind—the big hurts, the big betrayals that course through your body. What do you do about those?

What’s the alternative when someone treats you poorly? Revenge? Hatred?

And what about when you yourself mess up? When you’re not feeling good enough? Years of self-flagellation? People who can’t let things go, who take offense at every single little thing or who punish themselves and others over and over and over, seem angry, bitter, cruel, and paranoid. It seems like an unpleasant way to go through life.

John DeMartini suggests gratitude for the lessons learned and inspired action are better alternatives than forgiveness.

Yes, he says. See the opportunity. Say thank you for the lessons/blessings and take inspired action to make a change or take advantage of a situation.

So, there in my pool of spew, I tried to sit and look for the lessons, the blessings, and start taking inspired action.

Once I did, life started getting a bit better. I learned about domestic violence and what emotional abuse looked like—the patterns of communication, the dynamic, the ego involved.

I spent more time on schoolwork, and with friends who had a value system more similar to my own. I meditated. I did yoga. I tried to sit with pain and hurt. I started listening to the pain rather than dismissing it out of hand. And I started to take a real look at myself and how I appeared in the world.

I started spending my time focusing on working, writing, dancing, journaling, and reading. I spent more care on my hair, skin, clothes, environment, makeup, and food. I put up better boundaries. Made my time precious. I practiced spending time and effort on activities, hobbies, and work that put me on the path to my goals—goals that I perhaps hadn’t thought about well enough before. Enjoying your own company is a great antidote to feeling the compulsive need to forgive people.

Is forgiveness still part of the answer? Maybe. Maybe I was doing it wrong; maybe what I was doing was not forgiveness at all—it was just ego in forgiveness’ clothing. It was too easy. No one had to realize their mistakes or make changes, especially not me.

Maybe also, there’s a balance (my mother insists forgiveness is required for long-term relationships). Maybe it’s about not sweating the small stuff, but also not using forgiveness to minimize other people’s bad behavior, or your own, so that you feel like a bigger person.

Maybe it’s just that we are looking in the wrong place when we reach for or dole out forgiveness willy-nilly as if it’s an antidote for hurt. Maybe that’s like reaching for chocolate when you’re starving.

Maybe action, change, new behaviors, or boundaries practiced over time can be healthier options for healing.

Maybe sometimes those are what you actually need in order to let go of bitterness, soothe pain and betrayal, let go of judgment (it’s so heavy!), and feel less like a victim. So that at some point, you turn around and realize the hurt has gone, and has ceded to something wiser, stronger, clearer, lighter, and more helpful.

Annette Roberts is a full-time normal person. She loves reading and writing and podcasts and dancing and summer, in no particular order. She is a budding “person who writes,” having been bumped out of complacency by one of those horrible experiences that tend to turn “someday” into “today.” She is working on writing, taking her own advice, and getting into the splits.