The Real Measure of Your Wealth
By Julie Hoyle 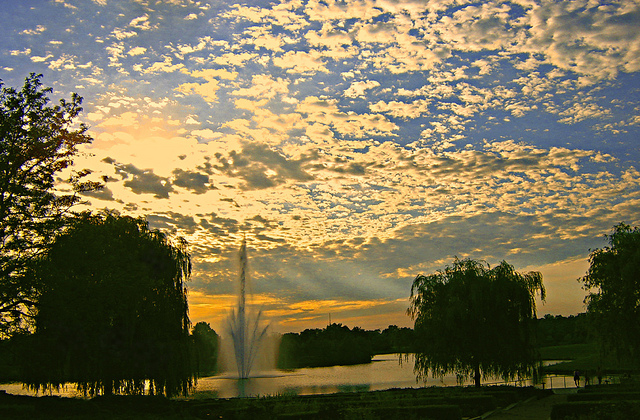 “The real measure of your wealth is how much you’d be worth if you lost all your money.” ~Unknown

A wonderful story from the yogic tradition highlighting the true meaning of wealth goes something like this:

There was once a beggar who spent his days sitting under an old banyan tree on the side of a dusty road that led to a bustling town. The man had been begging in that spot for years, rattling an old tin can hoping that passers-by would feel compassion and offer alms.

Yet, at the end of each day he would only have collected one or two rupees, barely enough to buy a dry chapati and a cup of sweet chai.

One day a wise man approached. Witnessing the beggar’s plight he called out, “My man, why are you wasting your days begging in this way? If you dig right where you are, you will discover great treasure!”

Desperate about his impoverished situation and intrigued by this idea, the beggar decided to take the wise man’s advice. Using his bare hands he began digging the earth under where he had been sitting.

To his utter amazement the beggar discovered a huge bag of rare, gold coins.

Dancing with joy he declared, “Had I realized I was sitting on top of great wealth I could have eased my suffering years ago!”

I was once like the beggar, always seeking ways to fill the empty bowl of my perceived lack, believing that if I worked and saved hard enough I would ensure financial security. However, on October 6th 2008, the bubble of that illusion burst when my husband and I discovered our bank had dramatically collapsed.

Suddenly finding myself looking into the grim face of my worst possible fear, I knew I had to change my understanding of what the energy of money represented and discover the source of true wealth.

As a young adult, I had inherited a strong work ethic from my father along with a subconscious belief that money was “hard to come by.” As a consequence, I had become terrified of lack and even more terrified of loss.

Though I had recognized this unhealthy energy dynamic years ago when starting out on my spiritual path, and grew determined to face and transform ingrained fears, here it was again in a form that could not be ignored.

Committing to pulling the old beliefs out by the roots, I kept drawing strength from entries I had made in my journal a few months earlier. They came in the form a wise man whose “voice” was so strong, powerful, and imbued with equanimity that I was compelled to listen.

The first message was an insistent directive I had heard repeated while waking up early one morning. It was:

“Why are you sitting on your wealth? You have been given everything! What are you waiting for?”

And intriguingly another message had been:

“You are exhausted because you are repressing the energy of your own creative impulse, which is your true wealth.”

Now I became acutely aware of being presented with two choices. One was to descend into contraction, panic, and despair. The other was to accept what was unfolding, view the situation from an elevated perspective, and use the messages like a lifeline.

Choosing an elevated perspective, I knew my soul was urging me to take action and find the courage to share my intuitive gifts rather than continuing to hide out of fear. It was definitely time to start digging in.

With that awareness I formed an intention to heal the financial and creative dynamic, realizing one was simply a reflection of the other:

For weeks after, every time fear began surfacing in response to lack, I would visualize the hole becoming smaller and smaller until it was completely gone.

In its place, rising up and out into the universe, I visualized a strong web of light, like a vast tree, spreading its golden limbs into infinity. This image reflected the belief that we receive limitless resources if we share the abundance of who we are, rather than believing in scarcity and limitation.

The gift of losing everything was amazing. It forced me to face my subconscious fears around lack and take responsibility for transforming them into something creative and beautiful.

Since then, the universe has led me to numerous vehicles for creative expression, which have included articles for Mind-Body-Spirit magazines, two books, and several online courses.

Three years on, our financial situation has also taken a graceful turn for the better with a large percentage of our savings unexpectedly reimbursed. I am also feeling more vibrantly alive, energized, and aligned with purpose as formerly repressed creative energy has been allowed to flow unencumbered.

If like many people worldwide you are facing your own financial challenges, have the courage to dig in and access what is available to you right now, right where you are.

Give yourself the abundant gift of engaging in your own self inquiry by asking the following questions:

If you are willing to engage in this work, you will have access to the unique beauty and vast richness of your own personal treasure. Over time, you will also arrive at a place where you are immensely grateful for any financial challenges you have had to embrace and transform.

Through suffering and loss, we often recognize that when we have the courage to be who we are, rather than procrastinating or hiding in fear, we are the source and embodiment of abundance.

Lori’s Note: Julie has generously offered to give away 20 one-year-long subscriptions to her online course Living with Alignment, which helps you live an authentic, passionate, purposeful life. If you’d like to enter to win, leave a comment below! You can enter until midnight PST on Sunday October 23.

Julie Hoyle is a spiritual teacher, natural intuitive and trans-personal hypnotherapist. Her profound spiritual awakening is detailed in her eBook, An Awakened Life- A Journey of Transformation. She offers online courses, soul purpose readings, and energy retrieval at: www.truealignment.org.

5 Ways To Reclaim The Human Wealth That Is Your Right

How to Live a Rich Life Without Lots of Money