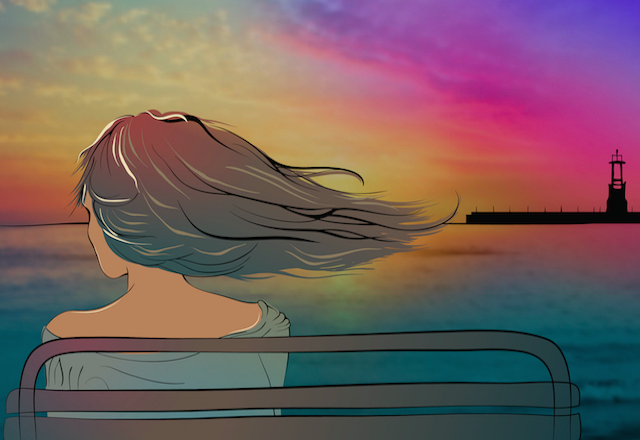 “They say time heals all wounds, but that presumes the source of the grief is finite.” ~Cassandra Clare

I lost my father to a heart attack when I was sixteen. I went to school on the morning of April 14, 2008 having a dad and went home that night not having one. I soon found myself dealing with an unfamiliar cocktail of emotions, pain so overwhelming that I wouldn’t wish it on anyone.

Every time I thought I was pulling myself together, I’d notice his belt buckle sitting on the dresser, or a pair of his socks on the floor, and suddenly the haphazard stitches I’d been sewing myself up with would tear open with heart-wrenching sobs.

I lost the ability to make simple decisions like what takeout restaurant to order from or what to watch on TV. Nothing made sense that week.

Dad had been my best friend, though not in the sense that he tried to act my age or allowed me to get away with things. On the contrary, my father was quite strict, always pushing me to be a better person.

He was my best friend in that I could go to him with any worry and receive honest, unbiased advice. He forced me to see the good in myself instead of dwelling on the negative. I could cry in front of him knowing that he didn’t feel awkward or want to avoid me like dad characters on TV sitcoms.

On the day of his death I had to accept that I could rely on no one but myself. That in and of itself seemed challenging, but now I had the added burden of everyone else depending on me. I was the shoulder that my mother and younger sister cried on.

As the oldest child I became second in command under Mom. She relied on me for help with planning funeral details and making sure papers were in order. I didn’t mind the new role because it was empowering, as though by helping Mom I was giving back to Dad for everything he’d done for me.

My greatest character flaw has always been focusing on the future instead of remaining grounded in the present. Not surprisingly, my father’s death and my long-term response to grief were no different.

I cried for the entire week after he died. I cried along with everyone else at the funeral. Surely that’s all that grieving was supposed to be, right?

When the funeral was over and the house was devoid of mourners, I picked my life up from where I was before his death.

I avoided living in the “now” because the present was too painful, yet simultaneously tried to convince the rest of the world that I was a strong woman dealing with her pain. I stayed focused on getting into college and doing all of the things I knew my father would have wanted for me.

This worked well until my senior year of college. I was on the Dean’s List, I had just gotten accepted into graduate school, and graduation was right around the corner.

Then my boyfriend proposed.

Except, I never expected that he would propose with my mother’s engagement ring, the same ring my father bought and proposed with. There was now a reminder of my father glimmering on my finger every day that I couldn’t ignore.

Despite it being one of the happiest moments of my life, my engagement caused all of the sadness I’d buried to start bubbling up to the surface with such vigor that it felt like the day of his death all over again. I couldn’t run home and tell Dad the happy news. He wasn’t going to be able to walk me down the aisle.

I realized how much I had been lying to myself. I hadn’t finished grieving because I hadn’t started grieving in the first place. I had been so focused on taking on the role of adult of the house that I didn’t give myself the chance to feel angry, resentful, or depressed, or to find the acceptance I really needed in order to move on.

During the funeral people approached me to say that things would become easier in time. In truth, I don’t think this is ever the case. I have decided that grief never ends; we just find different ways of working with it in our lives.

At twenty-four, I pretend to be a stoic and emotionless professional woman, but discussing my father with people still melts me like butter. I think about him and write about him more now than I did seven years ago, and that’s okay. There are no time limits for grief other than the ones we force on ourselves.

If I could talk to my sixteen-year-old self, I’d tell her she shouldn’t feel guilty for her sadness. She’s entitled to grieve however she wants, for however long she wants. More importantly, I’d tell her that it’s important to take the time to sort out those feelings instead of hiding from them or putting other people first.

I admit that certain memories of Dad still trigger a twinge of heartache. I will always feel emptiness in my life without him here. But I am aware of how much of him still lives with me—in my smile, my hobbies, and in the shared memories of people in my life who had the honor of knowing him.

The key to grieving is not to try to stop it as quickly as possible. Grief cannot be shut off at will, despite how long I spent trying to convince myself otherwise. What matters is that we acknowledge that we are in pain and try to find the goodness in our life despite it.

I used to look down at my engagement ring and feel numbed by sadness, both for the past and for the things that can never be. But with a new mindfulness I can look at my ring, this gift from my father, and know for certain that I’m allowed to move on and find the same happiness that my parents had.

My father’s never going to disappear from my life; he’s just talking in ways that require careful listening.

Alyssa Pierce is a freelance writer and children’s book author from New Jersey. She found her voice as a writer while attending college at Rutgers University-Newark. She’s currently working on her first novel. You can find out more about Alyssa by visiting www.alyssapierce.com or by connecting with her on Facebook.

Meeting Grief with Mindfulness: How Embracing Pain Opens the Door to Joy