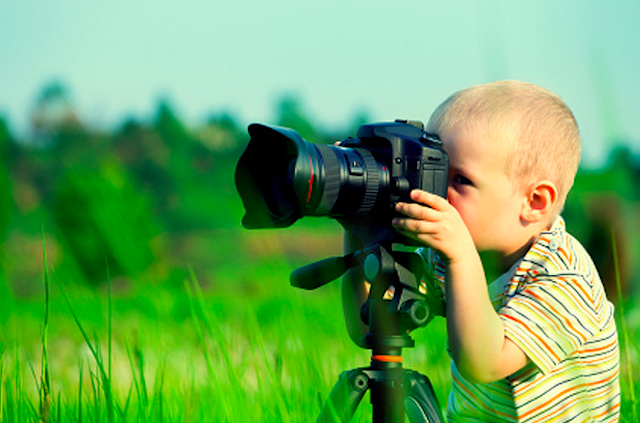 A little over a year ago, my brother and I decided to write a book together. At the ages of nineteen and twenty-nine, this was a really scary thing for us.

Neither of us considered ourselves “good writers,” and we especially didn’t think highly enough of our writing to imagine that we’d ever write a book.

I made C’s on most of my papers in high school and college and, quite frankly, my confidence in my writing was pretty low.

Each time I tried to sit down and write even a two-to-five-page paper, I would spend countless frustrating hours banging my head against the keyboard and writing all night in an attempt to reach the page limit. For me, writing was an extremely painful process.

I’d made myself believe that I was bad at it. All of the bad grades and papers full of red ink had me convinced that it was a lost cause. They told me I’d never be a good writer.

So when my brother and I decided to write a book, you can imagine all of the thoughts running through my head…

“I’m not a good writer. Why would anyone want to read my book?”

“I can’t even write a three-page paper. How will I ever finish a book?”

“What if nobody buys the book?”

And the list goes on and on. These types of thoughts keep most people from going after their dreams. They keep us paralyzed in fear, afraid to take the first step.

Seth and I had to overcome these insecurities as writers to get started. We pushed past them with childlike curiosity and channeled our inner five-year-olds by asking questions, making mistakes, and reaching out to successful authors for advice.

I’m going to tell you a few things that helped us through these insecurities, but first I want to ask you a question. When’s the last time you truly thought like a five-year old?

As children, we tend to believe that we truly can do anything we want. But a funny thing happens: as you go to school, get a job, and eventually retire, the world’s expectations and beliefs about you shrink your own beliefs. 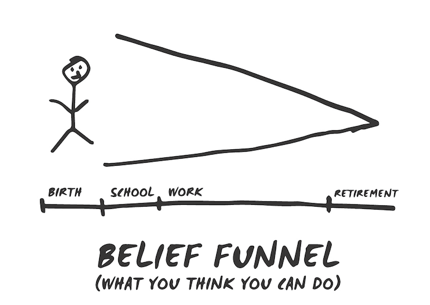 The things we believed we could accomplish slowly start to melt away and become unfulfilled dreams.

Our dreams of doing humanitarian work in Africa or playing in a band never see their start because we begin listening to others and accept that these things won’t happen.

It’s hard not to listen because many of these people have pure intentions. Some of them are people we love, who love us back, but they have no idea what is possible because it isn’t their dream.

Nevertheless, we follow the path they suggest based on their own beliefs of what is possible. Unfortunately, it can take years, decades, and even a lifetime to realize how our dreams were derailed and why. 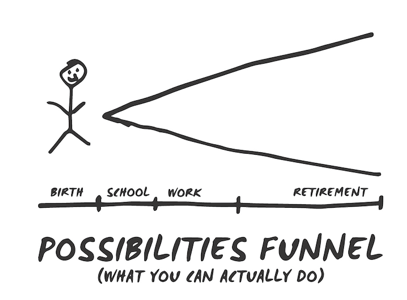 What you can actually do continues to grow, even as your beliefs (what you think you can do) get in the way of that.

So how do you push past your insecurities and start believing in yourself again? How do you take advantage of the endless possibilities available to you when your beliefs about yourself won’t let you take the first step?

Ignore your doubts and negative feedback from others. Five-year-olds don’t pay attention when someone tells them they might not be a princess and an actress when they grow up. They just keep believing.

When my brother Seth decided he wanted to be a musician, many people around him suggested he try for something more realistic. Despite the insecurities and the extremely small chance of success, he believed in himself and went for it. Now he plays around the world with his band NEEDTOBREATHE.

When you start believing and acting on your five0year-old dreams, there’s a good chance you’ll be surprised by how often they come to life.

2. Be the biggest loser.

The weird thing about our potential is that it often gets hidden. It gets covered up by doubt and by the discouragement we get from others. We often forget our potential exists, and it takes a friend or coach to remind us of it and encourage us to take action.

The NBC show “The Biggest Loser” is a classic example of this principle. Before coming on the show, the contestants fail to lose weight on their own because they lack the willpower, the time and, most importantly, the belief in themselves. After getting on the show and working with trainers, they uncover abilities they never knew existed.

If you’re looking to make a serious change in your life, find a coach or accountability partner to work with. They’ll help you tap into your childlike thinking and uncover beliefs, abilities, and innate talents.

Because of our lack of experience, Seth and I reached out to several successful authors for help and coaching on our book. Reaching out to people you respect can be a scary process, but each time you do it you’ll learn something new.

Many times we quiet our inner five-year-old because of the fear of failure. We fear that if we go for what we actually want, we might fail and look stupid. This was my fear before writing the book.

The best learning moments in life are when we fail. If you never fail, you’ll never make a difference in the world.

Think of the people who you admire the most. How many times do you think they’ve failed in their lives? Probably more than they can remember. These people are successful because they failed early and failed often. They got out there, gave it a shot, and learned with each failure.

Failure means you’re making progress. Don’t be so afraid of it.

When you were five, falling down and pushing yourself back up was an opportunity to build your muscles. You ran to explore possibilities because at worst you would learn something new and get stronger doing it.

If anything is b-o-l-o-g-n-a, it’s forgetting how to run and hope and dream the way we did when we were kids. So next time you’re feeling discouraged or insecure, ask yourself: “What would my inner five-year-old do?”

Editor’s Note: Chandler has generously offered to give away five signed copies of Breaking Out of a Broken System, his new book, co-written with his brother Seth. Each book purchased saves someone’s life through a life-saving malaria pill. Their mission is to save 10,000 lives by selling 10,000 copies.

To enter to win a copy, leave a comment below. You can enter until midnight EST on Monday, March 10th.

UPDATE: The winners for this giveaway have already been chosen. Congrats to M, VictoriaP, Tiffany Joi, Priya, and Alex

Chandler Bolt is an author and serial entrepreneur. He was bitten by the entrepreneurial bug at an early age and by age 20 he started and ran businesses that generated over $320,000. He wrote the book Breaking Out of A Broken System with his brother Seth Bolt (from the band NEEDTOBREATHE). Each book sold saves a life (#1book1life).

Connecting to the Sacred in the Chaos of Everyday Life