Train Your Mind: Overcoming Negative Thoughts Is Half the Battle
By Sarah Goodman 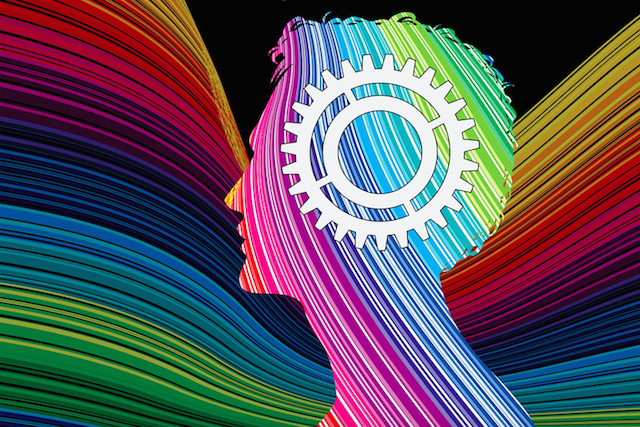 “Believe you can and you’re halfway there.” ~Theodore Roosevelt

I could not find the bottom of the pool.

The task seemed simple enough: Wearing no more than twenty pounds worth of gear, swim to the bottom of an eight-foot pool, remove your gear, and swim back up.

My feet combed for something—anything—solid beneath me, to no avail. A shock of fear struck through my veins, clouding my head. Panic. I reached a point of sheer, utter, uncontrollable panic.

Panic is an interesting beast. It is designed to trigger the flight-or-fight mechanism in the human body; it is for survival at all costs. Yet, it tends to override any form of rationality. So, with twenty pounds dragging me down into the depths, I attempted desperately to swim back up to the surface.

In swimming, there are three places you can be and only one of which is dangerous. The first is above water, where you can breathe. The second is on the bottom, where you can use momentum to push yourself up. The dangerous one is in between. In purgatory. This is where I found myself.

I had always heard about how everyone experiences a crucible event at the academy, during which they were stopped dead in their tracks and given two choices: give in, or do everything you can to claw and scratch your way to success. I, however, was complacent.

Time slowed down as I fought tooth and nail to reach the surface. When people are drowning and in a state of panic, they do what is called “shelfing.” It is a fruitless attempt to push the water below them with their arms to get their head to air.

I felt a moment of cold as my hand punched above the surface one last time, clawing for air, before my lungs began burning so badly that my body went limp. I watched the world around me begin to close to black. Pictures of my family and my life flipped across my thoughts like a film reel.

Just as I began to lose consciousness, a shepherd’s hook was thrust in my direction, pulling me to the surface, where I quickly clutched the side of the pool, panting, my heart pounding in my throat. I looked up at my combat survival swimming instructor, my eyes swirling with fear.

From that point on, this course became the bane of my existence. I writhed with anxiety before each session. I continued not to pass the swim tests. The dark cloud of failure lingered over my head. This was a mandatory class. If I failed, it put my graduation in jeopardy.

Here I stood, in the second semester of my junior year at West Point, with an enormous, unexpected mountain in front of me. This was my crucible. This was where I would rise or fall, and it would change the course of my existence.

It is important to mention that at this point, I had failed every single “survival gate.” I started going to every extra help session I could, continuously attempting to retest. It all seemed futile because the moment I began to sink in any capacity, my mind went into overdrive and the panic would set in. Once the panic set in, I was finished.

Buddha once said, “Rule your mind or it will rule you.” I was in good physical shape. I knew how to swim. This was not a question of capability; it was a question of mindset. And I had to fix it.

Up until this time in my life, I always used a brute force approach to challenges or adversities. I did not consider the mind as a muscle requiring growth and exercise, like the body. My mind had never acted against what my body and heart wanted to do. For the first time, I experienced uncontrolled thoughts that were influencing my actions.

Every time I attempted to swim, as soon as my hips would begin to drop under, or my head plunged beneath unexpectedly, my inner voice wailed, “It’s over. You are drowning.” Like clockwork, I would let my body become vertical, and I would sink beneath the surface, splashing desperately for the center ropes or the edge.

Something had to change. The water absorbed brute force like it was nothing, and it was more than willing to swallow me into its depths, no matter how much I flailed. I had to find a different way to stop myself from panicking.

I started small. I looked in the mirror before class, and told myself, “You can do this. You are strong.” I played motivational songs before class. I made a deliberate attempt to get myself excited, while inside, my stomach was squirming with dread.

Then one morning, while I was wearing my full kit and attempting to breaststroke across a twenty-five-meter lane, I felt my hips begin to sink. The flush of fear stung my cheeks, and my breathing became staggered.

“You are drowning! You cannot do it!” the voice of panic screamed in my head. I felt my shoulders go under. Then I could no longer breathe.

My eyes squeezed shut as my arms began to wave wildly. But, at that moment, my mind training seemed to kick in. “You are alright.” The small, timid words of reason attempted to push away the panic. “You can save yourself.”

I stopped flailing. I brought my arms to my sides and allowed myself to sink all the way to the bottom of the pool.

“You are okay.” I felt the bottom of the pool with my boots, and pushed as hard as I could against it, sending myself shooting upwards. With a gasp of relief, my head burst out of the water, and I swam to the end. I met the lifeguard’s eye; he had been waiting by the edge of the pool, ready to act.

This was the beginning of a change. I could learn to challenge the negative thoughts.

From then on, when I swam with my gear, I repeated the mantra, “You are okay. You are okay.” When I jumped off the 6-meter diving board and plunged into the depths of the pool, I told myself, “You will make it.” When I slid down into the wave pool, head first, in my gear, clutching my rubber rifle to my chest, I said, “You will finish.”

The swell of panic that consistently grew in me could be quelled by this quiet, steady focus that simply refused to give up. In the end, I retested every single survival gate multiple times and finally scored the minimum requirements to pass the class—on the very last day.

This experience changed my outlook on life and myself. The mind is an incredible tool that you can train to accomplish amazing feats. It can be your worst enemy, or, with practice and understanding, your best weapon.

It is vital to realize that everyone—you included—will go through a crucible in life. It will be a defining moment during which you teeter on the bridge between triumph and defeat, and you will have the choice. That choice and the choices you make every time you are faced with a hurdle will build the habits that ultimately will come to define how you will live your entire life.

You cannot fully prepare for a crucible in life, no matter how much you try. It will sneak up on you, and it will grab you by the neck and pull you under if you let it.

The key lies in your way of thinking. Every single time I got in the water, I was filled with a sensation of impending doom. My internal monologue told me of certain failure. However, you can change your inner voice. Make a deliberate effort to tell yourself a different story than the one that has been drowning you. Change the way you speak to yourself. When your mind is right, your actions can follow.

This is not a story of becoming the most successful swimmer ever. I scraped by with a single mark above failing.

This is a story of training your mind, and making the deliberate decision to fight the negative monologue that has overpowered you. Whether it be a crucible of health, school, physical activity, sports, money, the first step toward overcoming is to convince yourself it is not only possible, but you will.

The negative thoughts are next to impossible to fully stop. Instead, you must train your mind to answer them with stronger, more positive thoughts. Learn to trust yourself through positive self-talk. This is not a skill to learn in a single day, but you can train yourself before your crucible strikes.

The best step you can possibly take for yourself at this very moment is to practice the subtle art of training your mind and thoughts. Meditate on it. When you hear yourself complaining, counter your negative thought with an empowering one. Smile more often, even when you do not feel like it. Feel your fears and doubts, but go for it anyways. Compliment yourself daily. Practice gratitude and mindfulness.

Ask yourself the question, “Who do you want to be?” and use the answer to thwart any thoughts that keep you from becoming that person.

You do not have to let yourself drown to find your mental strength.