When You Don’t Fit In: The Value of Being Different
By Devi Clark 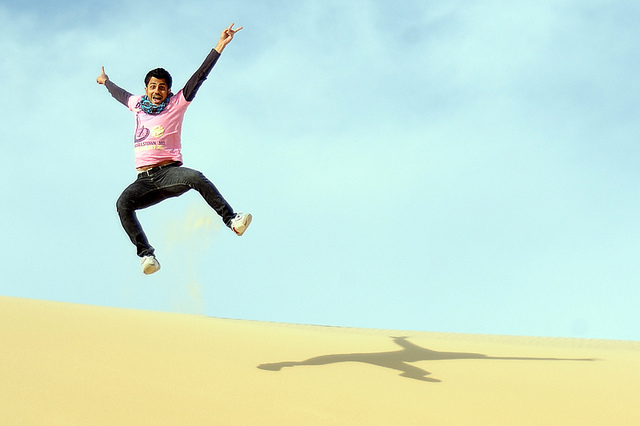 When I was ten, my blonde, blue-eyed best friend gave me a label.

“I never thought I’d make friends with anyone brown,” she said. She was clearly embarrassed by her revelation and had summoned the courage to own up.

I was dumbstruck for a moment. I never really thought of myself as brown, or indeed, as anything. I was just me.

Then, wanting to get us both out of this awkward situation, and thinking of how my Sri Lankan mother would compliment my beautiful golden brown skin, I blurted out, “Well, I’m not really brown, I’m golden.”

Immediately my friend collapsed into laughter, as she imagined me with bright orange skin. I suspect she was glad to divert the shame away from herself.

And I did feel ashamed. Ashamed of being labelled as something I didn’t particularly identify with, but also ashamed of denying my brown skin, of unwittingly playing along with this casual racism.

Over the years I have discovered that it’s not unusual to be judged as different.

I still encounter many situations where people make incorrect assessments of me based on my looks.

The question “where are you from” is sadly very common, as if the origin of my ancestors will give people the most important clues about who I am.

My kids and I have picked up some Sri Lankan characteristics (age four, my third generation daughter called her little brother “darling” with a decidedly Asian lilt), but on the two occasions I have travelled to Sri Lanka, I was definitely a foreign tourist.

Of course, my family history does partly define me, but mostly not in the way that those people think.

Instead, it defines me as different.

Being mixed-race is only one of the factors that make me different. I tend to be more outspoken than my peers, less religious, more bookish, more alternative… Apart from being married with two kids and a mortgage, there are plenty of things about me that are not “normal.”

Being different is a self-definition I struggled with for years, which I now deeply appreciate.

Although it is not always an easy path, I hold my differences as precious. Conformity would be stifling. I want to be me, not some mythical “normal” that only exists in my imagination.

Being different has tremendous value. Here is how.

1. Being different is a source of connection and belonging.

I find shared experiences when I speak with people who know what it is like to feel different—people with disabilities, migrants, creative people, gay people, introverts, recovering addicts, and many others.

Though we don’t share those particular characteristics, our mutual understanding of what it is like to be different connects us, powerfully.

But fitting in is the opposite of being yourself. It leaves you sick inside.

What we really crave is to belong. When we are accepted despite or even because of our differences, we have found true belonging.

2. What we have in common easily trumps our differences.

We have empathy built into our brains. Mirror neurons mean that when we hear someone tell a moving story, we feel what they feel.

Heck, Tiny Buddha is built on our ability to care, learn from and identify with the experiences of others!

We all want to be understood. And science has proven what we instinctively know: we are more alike than different.

So, take the risk of hearing and being heard. By telling your story you invite others to understand you, and to understand themselves better, too.

3. My differences are a source of motivation.

Looking back on the life choices I have made, I can see how my desire to help others feel they belong and are valued has influenced my career and relationships.

One of my favorite jobs involved providing careers and business guidance to refugees, amongst the most stigmatized and stereotyped people in our society.

These were often highly qualified and had been doctors, lawyers, and businessmen and women in their country of origin. Having left that behind, they found themselves without the respect, financial security, and social standing they had previously known.

They were portrayed as scroungers, while being excluded from working by regulation, discrimination, and lack of confidence. I found a vocation helping them navigate these obstacles.

Many of my colleagues were refugees themselves, who, having found their own way, wanted to pass on the learning to the next generation. Our differences motivated us to help others in the same boat.

4. Being different is intensely creative.

As I began to take more pride in what made me different, I began to research other people who went against the social norms.

I discovered that artists, entrepreneurs, innovators, and other world-changers were always different from the people that surrounded them. Like me, they had often felt excluded from the “popular” kids group at school.

They thought differently. They made connections (with other people, or between ideas) that others had not previously made.

In the process, their ideas were tested and improved and tested again.

Some made it big (think Steve Jobs, Lady Gaga, Barack Obama) appealing to a mass audience with their new ways of seeing; others appealed to a niche with similar tastes. In every case their creativity was rooted in their differences.

You, too, have value hidden in your differences.

Though we may never escape all judgment and discrimination, we can learn to value our own unique perspective.

Then at least we can stop judging ourselves.

Devi Clark is the founder of the Outsiders’ Network [www.outsidersnetwork.com/tb], a community where people transform the pain of feeling different into the courage to change the world. She also runs NewLeaf, for people who want to make an ethical career change into the non-profit sector.

Live Your Life for You: 5 Benefits of Embracing Who You Really Are