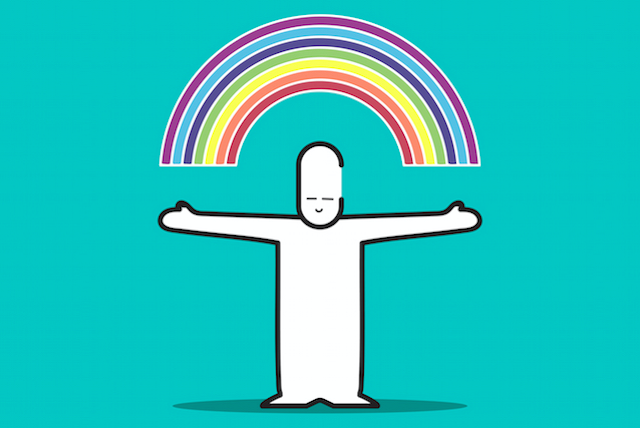 Through the course of the relationship he was dishonest, emotionally manipulative, and unkind. It was subtle at first—do we really sign up for this on the dating application? But the acts wound their way through like a slow vine that eventually kills a tree. When it ended, he handled it atrociously.

It took me many months to process it all, facing things I had suppressed in denial. When the shock wore off, I had a desire to let him know how he traumatized me—to outline all the ways in which he made me uncomfortable and how unbelievable and disgusting his behavior was.

I wanted to punish him.

I wanted him to understand that his actions—secrecy, meanness, disregard—were simply not the way you treat someone you supposedly love, someone that cares for and supports you.

I knew I had my own issues to work out around why I chose to stay in this kind of dynamic, but I somehow thought a really good apology on his part would at least validate my experience and hike me back up onto the pedestal on which I deserved to stand.

I wanted to believe that somehow my words would enlighten him—that understanding my experience would affect and change him for the better.

And I tried! My goal honestly wasn’t to get all prison gangster on him. I just wanted my pain recognized; to feel regarded and important.

I wrote a few letters that I thought diplomatically captured my hurt and positioned him perfectly to validate me and apologize. That apology would never come. In fact, when he did respond, it was in the form of anger, denial, projecting or minimizing.

When engaging him didn’t work, I turned inward. I created little pieces of art that depicted him with a huge ego and small…other parts. (I did not send those. One mature point for me there.)

In time I accepted that the recognition and apology were clearly not going to happen.

But the anger kept surfacing, and it was getting annoying. I had read volumes on the notion that “the behavior of others is about them, not you.” Logically I understood this, but I remained stuck in a purgatory. I couldn’t fully connect to and let go of the hugely distracting resentment.

Then a curious thing happened. As I began to learn the deeper roots of why a person mistreats another, the anger dissipated.

This didn’t require an individually detailed personal history to construe. They were facts that can be generally applicable to anyone that displays habitually abusive or destructive behaviors. They came through lots of therapy and research as I sought understanding I would never receive from him.

When a healthy person behaves in a way that hurts others, they take responsibility for that action and make amends.

I was dealing with an unhealthy person.

There are people who, because of an abusive childhood (emotionally, physically, or otherwise), navigating their way with a narcissistic or extremely controlling parent, or suffering other emotional trauma, developed protective mechanisms early on to avoid dealing with the shame and violation they experienced.

These mechanisms can start in the form of an inflated sense of self, denial, or even a secret life. They are ways to create “emotionally safe” conditions that allow them to experience freedom, “love,” or accomplishment in a way they didn’t have access to through healthy means.

Emotional stability was the most immediate, basic human need. But they had to learn to achieve it at a time when core values—such as respect, honesty, and empathy—may have not been fully developed.

When this person fails to deal with their pain and anger into adulthood, they never outgrow their early emotional survival skills. As these mechanisms take on an increasingly functional role, values that the person eventually came to understand (or claim to adhere to) become secondary to protecting their emotional safety.

These methods weld to their identity: they can live without the values but not without the relief their emotional protections provide. They develop into practices such as criticism, disconnection, projection (applying their transgressions or perceived shortcomings—whatever they don’t want to own about themselves—onto their victims), lying, and addictive behaviors.

What a healthy person considers a normal relationship negotiation or expression of personal needs, or even when life demands the basics of responsibility of regard for others, the unhealthy person perceives a threat to their vulnerable sense of self and unleashes their behaviors to maintain the emotional “safe place.”

Their abusive techniques essentially produce short term (false) feelings of success, confidence, or acceptance that feel uplifting and comfortable, especially when the alternative is to face a reality that is filled with perceived failure.

In my experience, there was often no discernable threat when my ex displayed inconsiderate, bizarre, or hurtful behaviors.

For example, if his sense of self was feeling particularly low—despite my adoration and support—that may have meant him blatantly ignoring me in a social situation to drink and flirt with other women. He often met requests to accommodate my schedule or needs with indignation. Playing with my son started to turn antagonistic to the point where I’d have to intervene.

Mere days after we ended our relationship, he claimed he had become “emotionally connected” to a new lover. A couple of weeks later he purposely paraded her in front of me and my children, yet completely ignored us. I couldn’t fathom what I, much less innocent children, had done to deserve that.

Even long before this absurd “new lover parade,” trying to have open, mature dialogue about the effects of his behavior, even in the most non-threatening way, resulted in projection, disconnection, or playing the victim.

There they were: the mechanisms to cushion himself from the emotional pain associated with having to take responsibility for his behavior (that he most likely regretted or felt ashamed of already).

The crazy-making boomerangs hurled at me made me realize the relationship would never grow into the beauty I had envisioned for myself, and if I stayed in, I would have to live with only erratically and unreliably receiving the things that were important to me: honesty, respect, commitment, kindness, empathy.

And that’s when a giant light bulb shone on my anger. His mechanisms for achieving emotional “stability” occurred in direct conflict with some of my deepest core values.

Anger is not a primary emotion; it is created to avoid core hurt feelings such as being disregarded, devalued, or rejected. And I felt all of those things every time my values were trampled.

Anger isn’t a measurement of something negative in your life; it’s a signal to reaffirm your own boundaries and values.

With emotionally unhealthy people, we’re not talking about mild immaturity or self-centeredness—we’re talking full-scale inability and unwillingness to recognize responsibility for their actions. And almost anyone is subject to the pie-flinging.

The slightest thing that he could translate into a question of his principles, responsibility, or regard for others resulted in anything from stonewalling to an aggressive verbal assault. I observed it wasn’t just me: it was his siblings, parents, the mother of his children—anyone he felt was “locked in” to him enough to have to swallow his behavior.

When I could finally understand that his motivation wasn’t to devalue me—that his destructive decision-making processes existed long before I came along—the adage “Don’t take anything personally” finally, fully came to life for me.

I was able to dissociate from the anger and focus on the more critical issue: regaining control of my life and all the wonderfulness of me. He was stuck in his own tornado, but I had a choice to live differently.

There are still moments where a tiny part of me wonders “Why won’t he change?” Because the fact is, he could. We are all capable of extraordinary growth. He chooses the comfort of the known; though disappointed, I can now accept that the disregard, disrespect, and uncompassionate behavior I experienced weren’t a matter of my value or importance.

I never thought it could be possible, but the love I feel now being alone with just my kids and my friends is more fulfilling and inspiring than having a partner I couldn’t trust to live by the values of basic human kindness when life gets challenging.

Understanding allows me to hold a prayer for peace for him in my heart, while I live my own life of opportunity from a place of strength and joy.

Kelly Berdine is raising two kids as a single mom on a rogue South American island. She offers down-to-earth advice and explorations on living with humans, empowerment and being your dream self. She is developing a project called Sketchbook Rebel, to help people process life's lunacies through art. Find her at Raw Beautiful Life, Facebook, Instagram and Twitter.