What Happens When We Assume the Worst of People We Love
By Carrie L. Burns 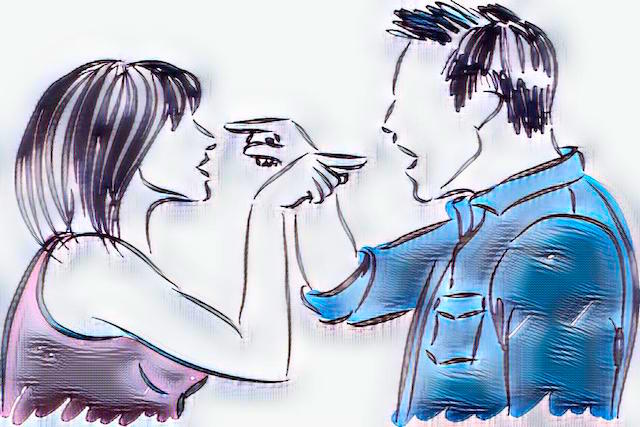 There we were on a Saturday afternoon doing such benign things as running errands at Costco, Trader Joes, and the post office. Excitement galore.

Yet, it would be a day I came to a major realization, understanding something I already knew in theory but wasn’t putting into practice.

I’m not talking about psychic mind reading either! I’m referring to the kind of mind reading that you likely do every day, all the time, likely without even realizing it.

Mind reading is when you assume you know what another person is thinking or feeling without direct evidence. In other words, you’re assuming their thoughts, beliefs, and intentions (and you’re usually assuming the worst).

Here’s an example from the day I mentioned at the start of the post: We went to Costco and got a few things, and I asked him if he wanted to grab some sushi for lunch after. “Nope. I’m good” was his reply.

“Hmmm. Well, thanks for asking me if I’m hungry,” I thought to myself. At this point I was sort of simmering in my own irritation but trying not to think about it.

I’ve been battling this theory in my mind that no one really cares about me or my needs at all and that everyone else on the planet is selfish twit.

So, another twenty minutes went by and he said, “We can go grab something small to eat if you want.”

Cool! I was starving. That red bull on an empty stomach sure didn’t help.

We needed to drop off the stuff at home first. As I was putting our groceries in the fridge, I pulled out two leftover sausages and threw them up on the counter to dump in the trash. We needed room and they looked icky.

He immediately grabbed the sausage and a plate and started cutting them into pieces.

I was mortified and pissed. What the hell????

All I could think to myself is, “He doesn’t care about me or if I’m hungry. He’s hungry, so he’s going to eat and he’s going to do what he wants like he always does. Jerk.”

My mind leapt right to it. I went right to assuming bad intentions and to assuming he doesn’t care about me or my needs. Quite a leap from him eating two sausages, I know.

But instead of saying, “I’m hungry. I thought we were going to go eat. What’s up?” I yelled at him and blurted out, “It seems like you don’t care about me and the fact that I’m hungry, and you’re going to do what you want and you only care about yourself and you’re being a selfish jerk.”

His response was to look at me like a deer in headlights because he had absolutely no idea what I was getting so mad about, why I was yelling, or why he was suddenly a selfish jerk.

Actually, no, it wasn’t good.

I had to stomp around for a while and simmer down, but as time went on, I realized we needed to resolve the issue, so I calmly asked him if he understood why I was upset.

Of course, he didn’t. I tried to explain my side and where I was coming from and how my feelings were hurt by his insensitivity, but as he kept talking, I concluded that the issue wasn’t him being selfish. The issue was that I misunderstood him. I assumed he was being selfish. I inferred negative behavior toward him when all he wanted was a sausage.

The truth is he thought I was putting the sausage up there for him to eat. He would eat the two sausage, still be hungry, and then we’d go have lunch. No harm. No foul.

The poor guy thought he was doing what I wanted him to do and instead I called him names. My bad.

I realized that my natural inclination to think that people are out to get me (which stems from childhood sexual abuse) is a problem, and that it’s my job to curtail this problem and stop acting out on it. I may feel a certain way, but that doesn’t make those feelings true.

I need to be more careful about assuming the worst in my partner, and I need to be better at communicating my feelings more effectively (that’s an entirely different post).

What to Do Instead of Assuming the Worst

If you can relate to my story, first, you should try to remember that most people have good intentions. We all act to increase pleasure and avoid pain, and very few people go out with the intention to hurt you. Even when people do hurt you, they are likely still acting with good intentions for themselves rather than bad intention toward you.

This doesn’t mean you put up with an abuser or a toxic relationship. It means when you are in a relationship with someone who cares but doesn’t always get it right according to your grand plan of the way the world should be, you stop assuming their intentions (especially if they’re negative), you give them the benefit of the doubt, and when in doubt, you ask.

If you go around assuming the worst about your partner, you’ll get the worst.

If you assume you know what your partner is thinking, think again.

If you assume your partner knows what you’re thinking, think again.

We go around assuming everyone else lives in our model of the world, and that’s just ridiculous. You have your childhood, your life experiences, your intelligence, your beliefs, and your emotional make-up, and everyone else has theirs.

What we need is more compassion and understanding, and less mind reading and negativity.

The truth is our entire argument (one-sided though it was) was based on a miscommunication and misunderstanding of the facts in evidence. The only true facts were 1. I put sausage out on the counter and 2. He started cutting up the sausage.

Everything else was a complete assumption on my part.

So, think about it next time you get upset with your partner. Do the facts support your belief(s), or are you assuming you know how they feel or why they’re acting the way they are? Are you assuming the worst of them, or are you assured that they care but maybe just suck at showing it the way you expect it?

Only you have the power to control your thoughts, emotions, and reactions. Only you can seek to create a harmonious rather than a contentious relationship.

I Used to Be Hungry All the Time