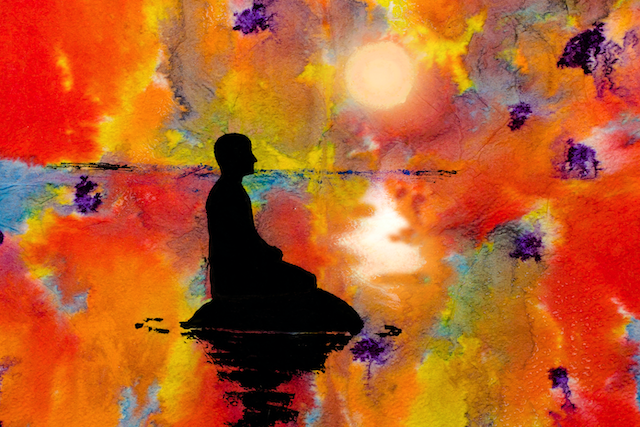 “Be gentle with yourself. You are a child of the universe, no less than the trees and the stars. In the noisy confusion of life, keep peace in your soul.” ~Max Ehrmann

Last year I realized that I lived twenty-eight years without knowing what it really means to love and take care of myself.

In 2010, I took some wonderful, worldly trips—Costa Rica, Bangkok, Taipei—trekking and exploring.

My husband and I bought a second home. I fully engaged myself in the improvements and the creativity of decorating a fresh canvas.

I ran several races, including a half-marathon, and finished well. I joined a swanky health and fitness club where I could take trendy aerobic classes. I was “taking good care of myself.”

Life was good. I worked hard, I played hard. The end. That was the story I projected.

But it was hardly that simple or fabulous.

There was a whole lot of turbulence in my life that I was trying to fix externally.

My grandma—who became the closest female in my life after my mom passed away—moved back to Taiwan after living in the states for twenty-five years. Instead of sitting with the hurt, acknowledging how I felt, I planned a trip.

I reasoned with myself, “No worries, I’ll visit her in Taiwan in a few months.” I booked a flight and put a band-aid on the fact that my grandma would no longer be thirty miles from me but, instead, over 7,000 miles away.

My baby sister, who opened my heart more than I ever thought was possible, left for China. Due to financial hardship, my parents had decided that it’d be better for her to live there with her grandparents for a few years.

I fought it at first but then subdued my feelings by validating that this was the right thing to do. I remember waving goodbye to her from the taxi with this creeping feeling of sadness and then just stuffing it away.

While traveling overseas, I became pregnant and felt so much joy. My heart grew ten times bigger. It was that same bliss and expansion I experienced with my baby sister. After seven weeks, we learned that there was no heartbeat and we’d lose the little bean to the universe.

I remember feeling overwhelmed by grief for a few days and then bounced back as quickly as I could. I was back at the gym, running full speed a few short days after my surgery.

A few days later, I became very busy trying to lease out our current home and move into the new one. I remember my mother-in-law expressing sincere concern for me. She said, “Cat, I don’t mean to be hard on you, but you’re doing too much.”

I remember becoming very irritated and defensive. I responded, “Don’t worry about me. I know it seems like I’m always doing things, but I really do take good care of myself.”

After all, I worked out six days a week. I ate healthy meals. I drank sixty-four ounces of water daily. I had girl lunches. I had weekly date nights. I scheduled massages when I was stressed. And, on most nights I even slept a minimum of six hours.

I took good care of myself—on the outside.

On the inside, I buried vulnerability. I played the resilience card. I sought out quick-fixes. And I convinced myself I was okay.

I wasn’t taking care of myself emotionally. Unconsciously, I placed “I’ll deal with it later” labels on several situations when they’d trickled into my life unplanned.

Somewhere along the overachieving path of seeking perfection and always looking into the future, I lost myself when these labels accumulated.

I managed to forget how to take care of my inner world.

After neglecting what was really going on in my life, I ended up in a curled up ball in our bedroom corner, head buried in my knees, feeling a heavy amount of pain all at once.

Humans are amazing, though; we adapt, we heal, we are capable of growing stronger.

When we acknowledge that changes, challenges, and hardships are there to deepen us, to remind us that we do get second chances, and that we are each made up of love, compassion, and healing, something remarkable happens.

With this new awareness, I ended 2010 with the promise to live differently.

I made a decision to wake up each day, wholly, by connecting to who I am—to nurture myself from the inside out, to be with life instead of delay it—and, in turn, my days started to become more inviting again.

I traveled to connect instead of using it as an escape.

I became a morning person and started each day with ample time for writing, reading, and practicing yoga instead of rushing into the office, fighting traffic, and always feeling behind.

I found peace by journaling and peeling back layers to heal the hurt that was buried beneath instead of pushing them away.

I started acknowledging my accomplishments and mini-successes and celebrated with small rewards instead of rushing to the next best thing.

I slowed down, simplified tasks, reduced my online time, and committed to less instead of doing, moving, and achieving simply for the sake of it.

I felt. I embraced the sadness I’d been carrying with me and leaned into my fears instead of placing a patch on them.

I listened to my body. I became a vegetarian and practiced mindful eating instead of counting calories and agonizing over whether or not I consumed too many carbs.

I chose to let go of the stories I kept replaying about the past and the worries I created for the future instead of clinging onto fear and anxiety.

I practiced saying no to the commitments that didn’t serve my values instead of saying yes to everything and shorting myself with each added responsibility.

I created sanctuaries—weekly time for me to relax and just be—instead of waiting for burn out before replenishing.

I followed my intuition and listened to myself in meditation instead of thinking and overanalyzing to the point of exhaustion.

I asked myself questions and allowed it to be okay that I didn’t have the answers right away instead of being hard on myself for not knowing.

I began fully acknowledging the present in its entirety—every aspect, including the playful, joyful moments, and the uncomfortable, challenging ones.

When we take the time to re-connect with ourselves, replace our fears with trust, and learn to let go of the things we cannot control, this is taking care.

When we listen to our intuition, embrace all of our imperfections, and stay authentic to who we are, this is taking care.

When we ground ourselves in the present and make mental space to find clarity, this is taking care.

When we discover our interior barriers and find courage to dissolve them, this is taking care.

When we learn to be gentle with ourselves, this is truly taking care.

When is the last time you acknowledged the feelings that are asking for your attention? How do you take care of yourself from the inside out so that you can fully experience life?

Cat is an explorer of the human journey and a lover of well-being. She is living and practicing at an urban Zen Center in San Francisco, and working for Wisdom 2.0, an organization that strives to bring wisdom and awareness into the digital age. You can add her as a friend on FB or find her writing on Medium.