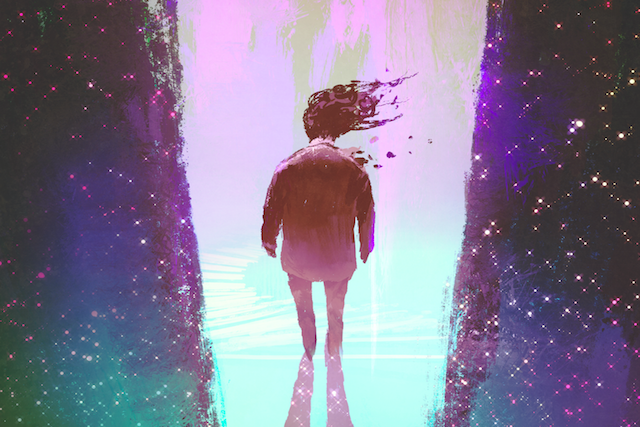 It was around midnight and I was curled up in the fetal position, mostly alone in my 7’x7’ dorm-style Manhattan apartment. It was me, countless bed bugs, dozens of cockroaches, three bottles of liquor, two packs of cigarettes, and one overwhelming mind.

I’d always felt drawn to New York City, largely because I grew up doing theater, but that’s not what eventually brought me there. For more than a decade before that move, I’d lived a life defined by starving, binging, drinking, fighting, and a persistent need to numb myself.

I’d blamed other people for everything that hurt in my life, and in the process hurt other people. After that, it felt best to move away and keep to myself. It was safer that way—for everyone.

I felt stuck in every way possible—stuck in my fearful isolation; stuck professionally, since I had a degree in acting and writing, but no confidence to pursue either; and stuck in a dangerous week-to-week living situation because I couldn’t afford anything better.

Worse, I felt convinced I deserved the life I created. And I wasn’t sure it was worth the effort to work toward something better. If the past were any indication, I’d find a way to mess it up.

Depressed, despondent, and dramatically reclusive, I couldn’t foresee a future that didn’t involve self-loathing and self-destruction.

When I read that, something shifted inside me.

I realized I’d lived my whole life responding with anger to things that happened when I was young, and feeling ashamed of that. I considered that maybe I could respond better from that point onward and feel proud of myself for doing it.

Maybe my life wasn’t the sum of my hurts and mistakes. Maybe instead of judging myself for where I’d been and feeling down on myself for where I stood right then, I could empower myself to create something different from that moment forward.

Maybe all that really mattered was the choice I made right then.

I didn’t make any major changes in the following months, but I did make one big commitment: I found a nearby yoga studio where I could volunteer behind the desk in exchange for free classes.

Suddenly, I had a reason to smile—and I don’t mean an experience that brought me joy (although it was that). My smiling face was the last thing people saw before they entered the studio to take care of their minds and bodies.

In some small way, I was part of something positive, and I felt good about that. I also felt good about coming to my mat day in and day out, no matter what else had happened.

Now I was piling up tiny reasons to feel proud. It might not have been a huge, dramatic change, but it was definitely big.

Those reasons snowballed into others—quitting smoking, writing a series of personal essays, finding a low-income efficiency studio to sublet, and eventually, securing a travel job that took me away from NYC after two-and-a-half years of stumbling and growing.

Though I’ve since transformed my external world by moving to California, falling in love, and starting this website, those changes aren’t the result of waking up in one moment and doing everything differently ever after.

Those changes are the result of changing my inner monologue from, “Why did I make such bad choices?” to “What’s the best choice I can make now?”

The biggest difference between me now and me then is that I no longer sit alone in shame, compounding negative feelings with self-judgment, which only keeps me feeling stuck.

I accept that I am human, and that a part of that is going through highs and lows. I know I will go through tough times, and I know I can bounce back when I do, even if it takes a while.

I have learned that we are not powerless. It may not always seem like it, but we have a say in what happens—and when events seem beyond our control, we have a say in how we respond to them.

That’s all we can ever control, and that’s what really matters: the choice we make right now.

*This post is part of my first ever eCourse, launching today: Recreate Your Life Story: Change the Script and Be the Hero.