What to Do When You’re Stressed, Distressed, or Overwhelmed
By Linda Carroll 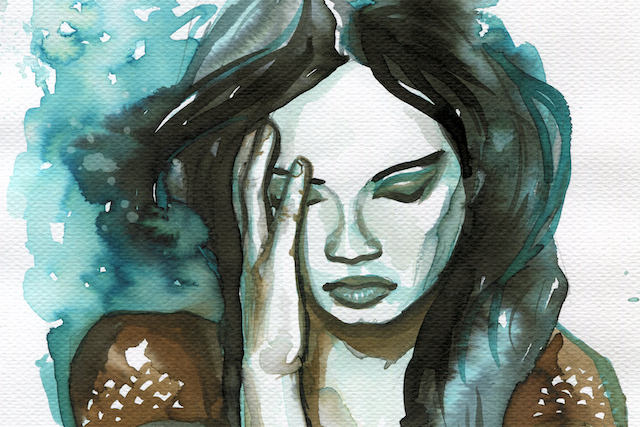 “Picture a pattern of upright dominoes that have been positioned just far enough away from one other to highlight the gap between them, but just close enough to hit each other if one of them tips over. Hit a single domino and it sets off a chain reaction. Oftentimes, our own actions, reactions and counter-reactions, criticisms and defensive responses function like dominoes. When we’re not able to access our mindfulness, reactivity takes over.” ~Alicia Muñoz

Before my husband and I were married, he lived in New Zealand and I lived in the States. One way we coped with the distance was by making cassette tapes for each other, which we would send via snail mail.

Sometimes we shared news of the day, personal information, and future dreams. Occasionally, in the middle of the night, the messages were passionate and deeply private—as only 3 am messages in the grip of longing and limerence can be.

One day, I had a client who was interested in the teachings of a meditation instructor with whom I was acquainted, so I offered to make her a tape of a session from the instructor’s workshop. I grabbed a blank tape from a nearby basket, used my recorder to dub one of the sessions, and passed the tape on to her.

A few days later, she asked if she could come by my office for a moment. When she arrived, she was uncomfortable and flustered as she handed the tape back to me.

“Uh, I—I don’t think you meant this for me,” she stammered. Then she abruptly left my office.

My heart seized. I knew which tape it was before I even listened to it. It was a recording so steamy I hadn’t even sent it to Tim. Somehow, instead of getting thoroughly erased or tossed in the garbage, the tape had found its way into the blank-tape basket.

I can’t find the words to describe my feelings. Crushing embarrassment surged through my body. When I made it home, I flung myself onto the couch and lay there for ten minutes, paralyzed with shock.

“How could you have been so careless?” I berated myself. It felt like the end of my career. As my shame and self-castigation mounted, my ability to discern my options plummeted. I began to consider moving to another town.

Suddenly I remembered a training session on stress management I’d recently attended. It had advocated pausing long enough to take a slow, deep breath whenever we feel overwhelmed and then doing something different.

I forced my leaden legs to stand and set the goal of touching an oak tree in the backyard before heading back to the couch. With effort, I got up and walked outside. When I reached my goal and gently touched it, I noticed a heron perched in a nearby tree, eyeing my fishpond with sinister interest. I moved into action, scaring it away by yelling at it.

By the time I returned to the couch, I was breathing normally. Although I was still embarrassed, the magnitude of my emotions had moved from a ten to a three. I’d begun to see I would not die of embarrassment, and my client would also recover from her shock. Pausing long enough to do something different stopped the chain reaction of the domino effect.

This is the biology of what happened. We each have a nervous system that operates outside of our conscious awareness called the parasympathetic nervous system. It’s activated when we are at rest and not in distress.

Essentially, in our normal conscious life the lights are on at the front of our brain, where the frontal lobe resides, and we make decisions that are reasonable, responsible, and rational. Our heart beats normally, and we generally eat when we are hungry and rest when we are tired.

When we are distressed, as I was when my client returned the tape to me, our brain switches gears and mobilizes the sympathetic nervous system, which causes the “lights to go out” in the frontal lobe and the “lights to go on” in the back of our brain where the amygdala (the brain’s 9-1-1 center) resides. So we react from another center, the system that tells us we are in danger, are embarrassed, or are under some other kind of threat.

Our heart beats faster, our blood circulation slows down, and our body reacts as though we are under attack—even if the attack is coming from our own thoughts, as it was for me. Some of us don’t eat, others eat more than they need, some people collapse into sleep, and others stay awake with tingling limbs and racing thoughts.

None of that is fun for anyone. The good news is, it’s totally fixable if we can remember to take a moment to pause. Working with our breath and moving our body—touching a tree as I did, for example—reassures the body that the danger is gone, and the lights can come back on at the front of the brain.

My story is a reminder of how important it is to manage our own internal reactions before we can respond to a situation in a healthy, productive, reasonable way. Taking a moment, a breath, or a stretch helps us rebalance in the face of distressing interactions; we can think wisely about what to do next rather than act from panic and reactivity. I call this skill the pause.

Four Small Steps to Help You Pause and Rebalance

1. Notice when your body is tense and stressed. Accept your reaction without judging it as wrong. Take a few deep breaths to slow yourself down. Tense and relax the muscles in your limbs.

2. Do something to get back to your body. Go for a walk, run, or do some other kind of exercise. Touch a tree and scare away a heron, as I did. Take a shower, chew on an ice cube, or smell some lavender.

3. Do something that quiets the mind. Listen to a soothing piece of music. Say a prayer, practice a mantra, or recite a poem.

4. Notice again what is going on in your body. It will probably feel different now.

You might have picked up on this already, but practicing the pause is inextricably intertwined with practicing mindfulness. Pausing involves observing your emotions and noticing your mind’s desire to react from its fear center, and it also involves redirecting the mind’s attention to more soothing, physical rituals like breathing and moving.

At spiritual retreats, it’s a common practice to ring a bell at unexpected times throughout the day. People are asked to stop what they are doing for a moment when the bell rings—they must stop folding clothes, put down their forks, or take a break from their conversations—and turn inward. This develops the practice of becoming still enough to take a breath and check in with our wise and centered selves rather than giving in to our first reaction to what is going on in the outer world.

Linda Carroll is the author of Love Skills and Love Cycles. While she has worked as a therapist and couple’s coach for over three decades and has acquired numerous certificates and degrees along the way, she says that her own thirty-five-year marriage is the primary source of her knowledge when it comes to the cycles of love. Visit her online at lindaacarroll.com or lindacarrollofficial on instagram.