When Different Parts of You Want Different Things
By Nicholas Montemarano 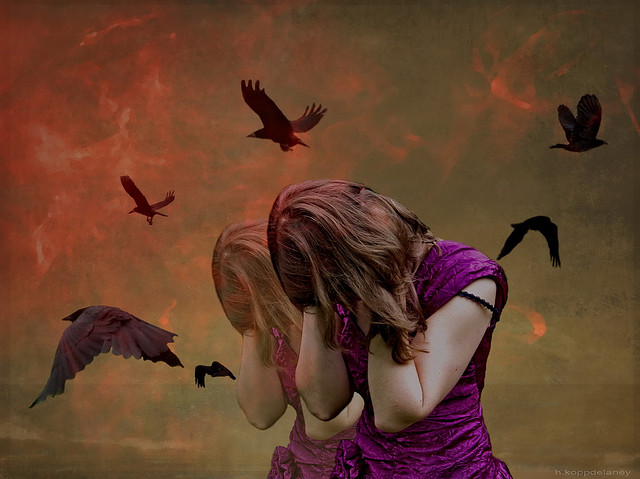 “Our sorrows and wounds are healed only when we touch them with compassion.” ~Buddha

His story goes something like this: “I need to be the best at whatever I do, but no matter how hard I work, I will never be the best because the world is unfair.”

For most of my life he’s been carrying around this impossible task, and it has really weighed me down. He’s caused me a lot of pain and anxiety, and sometimes I’d like to get rid of him.

Rather, some other part of me wants to get rid of him.

Now I’d like you to meet that other part. He’s me and he’s not me.

His story goes like this: “Ambition causes us nothing but pain. We need to stop striving and devote ourselves entirely to a more spiritual path, even if it means giving up some of the things we’re passionate about.”

These two parts, both inside me, have had some knock-down, drag-out fights, let me tell you. It can get so heated that sometimes I decide it’s best to stay out of it.

And that’s part of the problem.

You see, we all have many parts inside us, and some have been with us most of our lives. There are two things we don’t want to do in our relationship with our parts, but which we tend to do: (1) let them take over; (2) exile them.

Our parts mean well—they believe that they’re helping us—but often they operate out of shame and fear. And so when we allow them to take over, they do more damage than good—despite their best intentions.

They shout at each other and make their cases, asking me to choose one of them to be in charge of my life. When I become exhausted with their fighting and choose one over the other, the exiled part only gets louder and louder. Try to imagine them as two children having a battle of wills, asking their parent to choose between them.

What these parts don’t know is that they’re not protecting me—my true self, who doesn’t know shame—but other parts of me, who have their own stories.

As you can see, it can get pretty crowded inside you. But over time, you can get to know—and love—your most prominent parts. Here’s how.

1. Learn to recognize when your parts are trying to take over.

The warning signs are fear, anxiety, shame, extreme anger, and other strong feelings of unease. Rather than allowing these feelings to overwhelm you, or running away from them, try to see them as messages from one or more of your parts that are asking for your attention.

2. Listen to your parts.

What they want before all else is to have their stories heard by someone who will listen and understand. They may want to tell you—or they may be afraid to tell you—when they first showed up in your life and why. Your true self, who is compassionate, calm, and curious, is the ideal listener.

3. Mirror your parts and validate that their stories make perfect sense given their life experiences.

I might say to one of my parts, “I understand why you see life as a competition,” or I might say to another part, “It makes sense that you want to go live in a monastery and meditate all day.” There should be no buts, no reasons why the parts shouldn’t feel the way they do.

It’s almost always the case that our parts are suffering, and have been for a very long time. They’re often frustrated and exhausted and afraid. It goes a long way to say to them, “Wow, that must be hard to carry around that burden all the time.”

5. Thank them for trying to help you—even if their methods haven’t always been the best ones.

The last thing you want to do is scold a part for messing up. When we shame or exile our parts, especially our darker parts, they have a better chance of taking over our lives when we least expect them to.

6. Reassure them that you’re in charge and that you don’t need them to do their jobs anymore.

Try to remember that their impossible jobs—to be the best, to be spiritually perfect, to avoid pain—have become burdensome, and they are exhausted. They really do want to give up these jobs and turn things over to you.

7. But our parts want to know that they’re still needed, and so you don’t want to fire them but give them new jobs.

8. Maintain a close connection with your parts.

Try to recognize them as soon as possible when they show up—and they will, believe me. Our parts need their stories to be heard again and again, maybe for the rest of our lives.

I realize that all of this might sound a little strange to you—talking about parts as if they’re separate from us. In truth, they’re not separate, but sometimes we need more separation from them.

The best way for your true self to be in charge is to separate from your parts while letting them know that you’re still there, close by.

Because I’m a writer and have had a lot of practice using my imagination, it’s been natural for me to visualize my parts. They tend to look like me at the age I was when they first showed up—usually when I was a child. Seeing them as separate from me, especially as children, allows me to access genuine compassion for them.

The work I’ve done with my “internal family” has been some of the most important, rewarding, and spiritual work I’ve ever done. I encourage you to be open-minded and give it a try. It may turn out to be one of the best things you ever do.