When Relationships Change: Growing Together, Not Apart
By Terence Stone 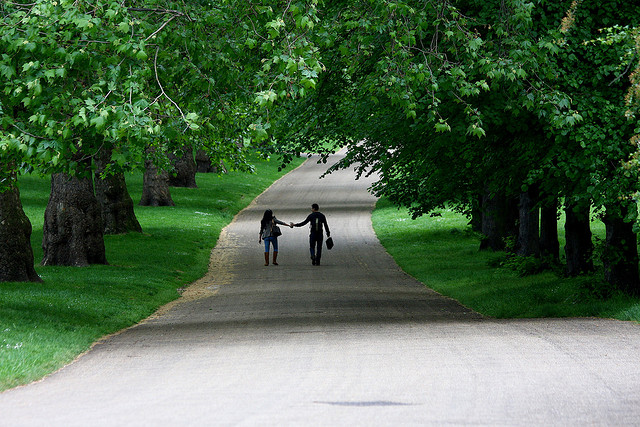 I got married three years ago right out of college. We had been together since freshman year, and lived together for two years. Still, we didn’t fully understand what was coming our way.

I remember my parents telling me, “You know, marriage is a lot of work. It requires effort.” I fervently assured them that I understood, because I thought I did. But understanding something conceptually and experiencing that thing are two different animals.

Our first year of marriage was fine. To be honest, I don’t remember too much about it. It was more of the same; just a couple of kids having fun.

What I did not know then was that tiny hurts and resentments had begun to creep up on us. I believe these were unspoken, unconscious issues that had been present but overlooked throughout our relationship.

The manifestation of these problems was subtle at first. It was just our usual way of operating; little jibes at each other, veiled judgments, stubborn protests. Nothing new, but something had changed.

My wife took up Tango. I didn’t. She started going out more often. I stayed at home more and more. The rift that had already occurred between us had just been unmasked.

We started fighting more often. In some cases, they were brutal, malicious, screaming fights. At a certain point we began to “accept” our situation.

I decided I would just deal with it and do my best. But my idea of dealing with it was mortally flawed. I stopped protesting to her outings, and she began to spend more and more time away from home.

The resentment built up inside both of us. There was almost no real communication happening. Sure, we had our good days, but in general, we cried more than we laughed.

Finally, one night my wife didn’t come home. Neither of us called or texted. I went to bed alone, as I was wont to do those days, but I woke up in a panic around three in the morning when I realized she still wasn’t home.

Then, I called, texted, worried, and repeated the process for two hours. She finally arrived home at 5am. She had been dancing all night. She did it to hurt me, because she was hurt.

We were both in so much pain.

The next day, we sat down with each other. I said that we could not go on this way. We both admitted how angry we were at one another. We were not well-versed in this type of conscious conversation, so we talked in circles.

Yet, it was a turning point.

We made two decisions. First, we would seek out couple’s therapy. Second, we would take a trial separation. This was heart wrenching. How had we gotten to this point?

We began couple’s therapy and shortly thereafter realized that we both needed individual counseling. We were dealing with deep-seated emotional issues that we had never before confronted.

The first eight months of counseling were difficult. During that time, we separated twice for a month each time. But once again, something had started to change…for the better this time.

We started spending more quality time with each other, making the decision and the effort to really be with one another. We resolved to listen and stay present, and to be honest about what we were thinking and feeling. If you’ve been in a long-term relationship, you know how difficult that can be.

Now, a year and half later, my wife and I are still in counseling, but our relationship is better than it has ever been. We make it a point to sit down and have a check-in conversation at least once a week, if not more.

We have learned to compromise on our social endeavors. She still dances. In fact, she’s an incredible dancer. And I go with her when I can (though I’m no good). In turn, she spends more evenings at home with me when time and work permits.

Ultimately, what we learned was that if there was to be communication, we had to speak and listen to one another with intense presence, honesty, patience, and compassion. And above all, we realized that we had to accept that our relationship was changing, that it needed to change.

When our problems first surfaced, things had stagnated. In many ways we had resisted change: the transition from student to working adult, from boy to man, from girlfriend to wife. But if we’re always resisting we never see what is right in front of us (or inside of us).

What I’ve come to realize is that often we leave things unsaid because we believe broaching the issue will be more trouble than it’s worth. In turn, we get defensive when our partner is critical, even in a constructive way.

In both cases, we are resisting what is and the opportunity to grow. It is a recipe for resentment, anger, and ultimately, apathy.

I urge you to think of yourself in this light. Whether on a large or small level, how often do you resist what’s going on inside of you? No one wants to feel annoyed, hurt, angry, or sad. But if we feel that way, we must accept. Otherwise we suppress and miss an opportunity for self-growth.

Only when we make the decision to acknowledge what is really there can we take the first steps toward healing. When that happens, we stop fighting the truth and are able to loosen the grip on all the pain to which we are so accustomed.

Nothing is ever perfect, but we must remember that to live and to love is to change and to grow. We can resist it all we want, but change is inevitable.

Growth, on the other hand, is conditional. It only happens when we choose to embrace change one moment at a time.

Terence is the Chief Writer/Editor of Urban Spiritual, which he founded in hopes of helping others (especially city-dwellers) on their spiritual/introspective journeys.  He's also a performer, poet, traveller, meditator, arts-lover, and well-being enthusiast. Feel free to connect with Urban Spiritual on Facebook, Twitter, and Google+

Interview and Giveaway: A Spiritual Renegade’s Guide to the Good Life