When You’re Anxious to Finish: Being Patient with Your Passions
By Anonymous 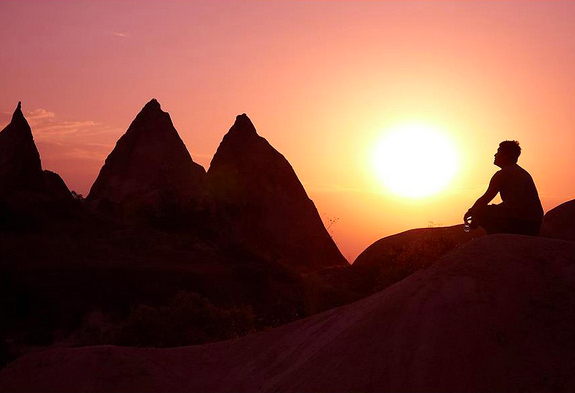 It was 2:13am. My skin stuck to the bed sheets as I realized I was lying awake, listening to my belabored heartbeat. This was the first physical anxiety attack I had ever experienced—one that I hope won’t be repeated. And it happened only two nights ago.

Apparently, the past two years have been more intense than I realized. It’s quite obvious, really, when you see that I’ve failed to write much, for Tiny Buddha or my own blog, in that time.

I wish I could say that I’ve been too busy accomplishing goals, or have taken the years to learn new skills, but I’m afraid all these symptoms stem from a rather incurable demon. I’m writing, of course, about impatience and its power to delay.

Impatience is invisible in that it can easily be misinterpreted as ambition, which creates an even greater problem.

Where, on one hand, I may be more driven to take on more projects, on the other, I am led to a mess wherein very little gets done. Sure, I may have many things that I am passionate about, but this zeal is what in turn creates a false ambition, an impatience to do simply much more than I can handle.

But what is impatience; or rather, what is patience?

I’ve always liked the idea that the sense of urgency was passion in action—that it was a good practice to urge myself to write an essay, hustle in freelance video editing, or go off and create my own indie game in an attempt to join a new dimension of storytelling.

So patience, then, isn’t a matter of doing less but rather the mastery of juggling, right?

Well, after trying to calm myself in a physical fit of impatience boiled over, I’ve begun to think otherwise.

Lately, I’ve been listening a lot to Alan Watts’ recorded lectures from his teaching years while based out of San Francisco.

He spoke a great deal about eastern spirituality, Buddhism, contemporary mysticism, and all those curious, philosophical nonsensities that usually weird out those unfamiliar with the subject matter.

But what really strikes me is his take on controlled anarchy—the biological organism in which the parts harmoniously create the sum with no boss in charge.

For instance, in sculpting, it is often understood that the artist imposes his will upon the clay, thus the art of making a sculpture is simply the mastery of manipulation. But, as Watts was found to point out, the most beautiful art comes from the chaos of life itself.

In fact, there was one such occasion documented publicly in the form of a sculpting contest that Watts mentioned in several of his lectures.

The contest didn’t award the first prize to the sculpture that was most masterfully willed out of the clay by its creator. First place went to a young woman who took the clay, smashed it on the floor, and kicked it around until she realized what it was “trying to be,” afterward, simply carving out the pieces that she thought weren’t supposed to be there.

This, in turn, created a wonderfully random, and thus beautiful, piece of modern art. So it is with the rest of life; after all, did you plan on growing your beautiful eyes, or did it just happen?

Passion, then, is the artistic beast within us all, vying to get into the world in sheer, ferocious eagerness. Patience is the way to let it out calmly and in great mastery.

If you draw, do you draw the whole drawing at once? If you sing, do you sing all the notes in one breath? And if you dance, do you perform all the steps in one beat?

Of course not. You let it out one bit at a time.

So how can one be a patient master of their zealous passions? When faced with impatience, there is only one thing to do: allow it.

If we remain patient with impatience, we’ll find ourselves in that calm space where amazingly creative things can happen, just like that young woman who sculpted her clay into what it “wanted to be.”

Ralph Steadman isn’t able to create his popularized depictions of grotesque or bizarre ink drawings when he’s so adamantly trying to come up with his next piece. It is only after he splatters ink for some time that he realizes what is coming forth from the blots, and then he applies the finishing touches.

This is the greatest level of mastery to reach in our lives, this art of patience. I know more and more each day that I will achieve my goals in due time, and that to push myself may not always be the best way to remain productively creative.

Pushing yourself can be hard on both the mind and body and will only lead to the opposite effect of urgent production—anxiety-ridden self-destruction.

I like to relate patience to the stability of a mountain. A mountain does not strain itself to keep from crumbling to the ground; it just happens that it does not fall and thus makes a mountain.

We are like mountains. Our hearts beat, our cells fade and regrow, and our minds create tides of thoughts and hopes and dreams. But, like a mountain, we happen all at once without our conscious minds telling us to act.

I mean, is it you who tells your heart, “Beat, beat, beat, or else we’ll die!” Of course not. It just happens. And so it is when you find yourself trying to beat impatience out of your mind that you’ll only grow more impatient.

Thus, be like mountains, not like your conscious and incessant flow of thoughts and anxieties. Let them go. And before you take another step toward anything, just breathe and let your next action happen as naturally as your breath.

As I said earlier, impatience is invisible in its cleverness to disguise and deceive, but this is only because we believe we can impose our wills directly upon the world. That’s a stressful way to attempt to work toward our goals.

If we keep the goal in the back of our mind and focus on the step in front of us, the rest will flow like a river.

Mastery, then, is the effortless patience that pulls passion into the world naturally like rain falling from a thundercloud. All we need to do is stop fighting ourselves and let it happen.

Working on Impatience and Appreciating Its Gifts

Don’t Try to Become the Best, Be Your Best Right Now