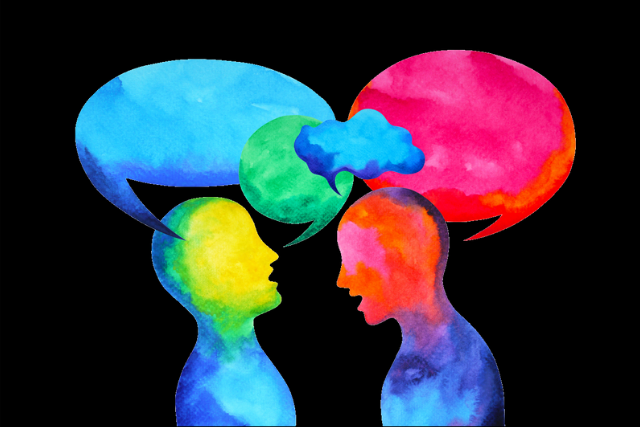 “Conflict is inevitable but combat is optional.” ~Max Lucade

I used to do everything I could to avoid having conversations that could potentially be challenging or difficult—even resorting to lying or obfuscation if I really felt backed into a corner.

I didn’t have a good template for what healthy conflict looked like, so every challenging conversation felt like a minefield where I could be attacked, blamed, or shamed at any moment.

As I got older, and especially as I started dating and getting involved in longer-term relationships, I realized that conflict was actually an inevitable, even necessary, part of co-existing with someone else.

And, rather than being fraught, defensive, and filled with attack, conflicts could actually be an opportunity for greater intimacy and connection.

Although I still feel anxiety around conflict and am still very much learning how to handle it in a healthy way, the number one shift that has had the biggest influence on how I show up in conflicts is my attitude toward them.

When I went from avoiding challenging conversations and viewing them as “bad” to viewing them as an integral part of communication and necessary for a healthy relationship, I felt far less pressure to avoid them and started seeing how they actually could be helpful.

Difficult conversations are a fact of life. As much as we might try to avoid them, there will inevitably be a time when we uncover a conflict of needs, values, or preferences in relation to someone else, and want to resolve that conflict.

If you’re currently struggling with difficult conversations in your life, here are five things I’ve found helpful for turning conflicts into opportunities for connection.

1. Have the conversation sooner rather than later.

If you address the issue as soon as it comes up, you’re far more likely to have a productive, low-pressure conversation than if you wait until breaking point.

Storing up our issues and grievances, and then unleashing them as a torrent on the other person (or waiting until the other person expresses an issue to share our own), is unfair and damages trust in the relationship.

Whether we’re talking with a friend, partner, or colleague, we’re going to foster a greater sense of security in the relationship if we’re able to discuss things when they come up rather than wait until they become a crisis.

A big shift in my own communication came when I started using “I messages” and expressing myself in terms of my own feelings, needs, and requests rather than focusing on what I thought the other person had done wrong.

Instead of starting with “I want you to do this/stop doing this,” explain your feelings—for example, “When it’s your turn to take out the trash and you don’t do it, I feel frustrated.”

Also, make requests based on your needs—for example, “It’s really important for me to feel trust and respect. A part of that is knowing that you’re going to do what you say you’re going to do. Would you be willing to think of some ways you can remind yourself?”

When we use “I messages,” we stop blaming other people and demanding that they change. Instead, we are simply stating how we feel, what we need, and making requests based on that.

Most misunderstandings we have with other people arise from the fact that we react to the meaning we attach to the facts rather than the facts themselves.

If I ask my partner a question and he doesn’t respond, I can jump to all kinds of conclusions about why he is “ignoring me.” Is he angry with me? Does he think it was a stupid question? Doesn’t he care about what I have to say?

When it comes to difficult conversations, it’s important to stick to the facts and respond to the facts only.

It’s natural for our minds to want to fill in the gaps and create an entire story from a few puzzle pieces here and there. When we do this, however, the pieces we create aren’t necessarily true, and we run the risk of adding far more tension to the situation than it otherwise deserves.

When emotions rise, it’s easy to start using generalizations like “always” and “never.” When we tell someone that they “always do X” or “never do Y,” however, we’re more likely to push the other person further away than to heal the conflict.

Using the example above, if I said, “You never take out the trash when it’s your turn,” the other person’s focus is likely to shift to defending themselves and pointing out all the times when they have indeed taken out the trash instead of listening to what I’m saying and focusing on a resolution.

Very few people “always” or “never” behave in a certain way, so make sure you take a deep breath and check your language before saying something that could escalate the conversation.

5. Empathize with the other person.

Empathy—understanding what it’s like to walk in someone else’s shoes—is incredibly effective at diffusing tension and breaking down defenses. When we feel hurt, frustrated, or annoyed by something someone else has done, we can forget that they probably had very good reasons for doing (or not doing) what they did.

Difficult conversations may feel hard, but we can make them easier by following these steps and recognizing the opportunity for connection.

The Most Powerful Way to Resolve Conflicts in Relationships