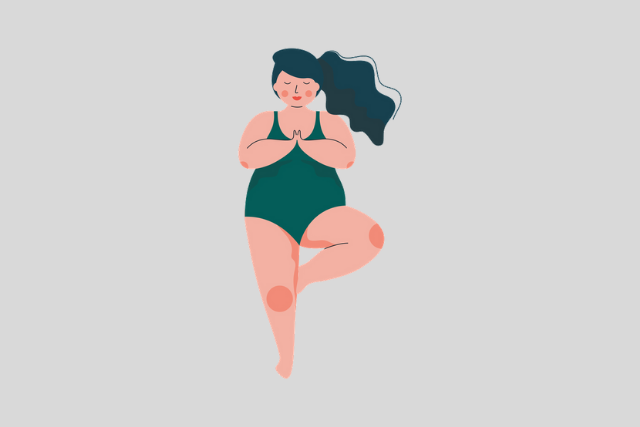 “Resistance keeps you stuck. Surrender immediately opens you to the greater intelligence that is vaster than the human mind, and it can then express itself through you. So through surrender often you find circumstances changing.” ~Eckhart Tolle

I took a deep breath, feeling the recent change in my belly. I pinched at my belly rolls. They were familiar, I’d had them before, but recently I had gone through a period of over a year where I was in a smaller body. Now I was gaining weight again.

I refuse to step on the scale, so I don’t actually know how much weight I’ve gained. I can just feel it in the extra belly rolls and the snugness in some of my clothes. In my mind, I have two choices: to wage war on my body or to surrender to the weight gain.

Surrender is the ability to let go of the crushing weight of societal and personal expectations. It’s waving the white flag, signifying I’m giving up all the diet culture methods I’ve tried so hard to make work. I’m acknowledging that they actually never worked in the first place. This option isn’t always so easy, though.

For some context, I’m a body positive and fat positive activist. I advocate for acceptance and health at every size. I tell others they’re worthwhile just as they are. Though when it comes time to put them into practice within myself, it’s very challenging.

I still have days where I suck in my stomach, hoping to appear skinnier to the world and to myself. I try to shrink to become small enough. I feel as though my worth lies in the number on the scale (even though I’m a stranger to it now).

I lie to myself and say that I’m never going to find a partner if I keep gaining weight. I beat myself up about the food I’ve consumed and I compare myself to other people.

My body positive journey is far from perfect; I struggle with all of these things. One big reason is internalized weight stigma or fatphobia. It infests my mind and can take over if I’m not careful.

I mean, look at the world: We fear and despise fat. People are bullied and discriminated against because of being in larger bodies. Fatphobia is very real. It’s ingrained subconsciously; our society trains us to be this way.

The Body is not an Apology outlines some ways in which fatphobia rears its ugly head. In jobs, fat employees tend to be paid less for the same work. In dating, they often deal with people who fetishize them rather than seeing them as humans. In fashion, there are rarely sizes available beyond a size 16. In medicine, doctors see them as weak-willed and lazy.

This is not surrender in our society. This is bullying and prejudice. No wonder it’s hard for people to accept their changing bodies—there are so many consequences for being fat.

The irony of fat-shaming in the name of health is that it actually causes adverse health effects. According to a survey done by Esquire magazine, two-thirds of people report they’d rather be dead than fat. Can you imagine the damage this amount of stress does to one’s system?

No wonder we’re terrified of gaining weight. We let those messages infiltrate our minds, and they drive us to pinch at our belly rolls as if we’re the worst people ever.

On the other hand, being thin means being accepted, flying under the radar, even being complimented. It means that life is easier because you’re not oppressed in this way. Still, fatphobia manages to creep into all of our minds.

When you’re scared to death of what other people are going to think of you, you’re carrying your own sense of internalized fatphobia. This phenomenon even impacts those who are in smaller bodies because of the negative feelings they have about themselves and the world.

It makes sense, then, that my first reaction to my body admittedly isn’t always unconditional love. Rather, the old messages in my mind were saying, “You’re not good enough. You’re disgusting. No one will ever love you. You’re a failure.” They were loud and unrelenting. I was familiar with these messages.

For many years I waged war with myself. I was stuck in cycles of binging and restricting that wreaked havoc on my body. I thought I was being “healthy,” but really I was very sick.

I was obsessing over every little thing I consumed, making sure to track seventy-two calories of butter to my MyFitnessPal app and being hysterical when I gave into a Twix bar. Weight control owned me. I was constantly thinking about food.

Binging and restricting create terrible health risks—getting physically sick from too much or not enough food and brittle hair, not to mention the emotional consequences that occur like stress, obsession, and the absence of joy.

I loathed my very existence, and I definitely was fighting a war against my body and myself. I thought that there was something fundamentally wrong with me. It was utterly exhausting.

I started to think that there had to be another way to relate to my body.

When I was twenty-two, I discovered the body positivity movement. I began with a program called Bawdy Love, which was all about being a revolution to loudly declare that every body is worthy and no body is shameful.

I began to follow body positive influencers online like Megan Jayne Crabbe, Tess Holiday, Roz the Diva, Jes Baker, and hashtags like #allbodiesaregoodbodies. Fat women filled my feed. They were beautiful and unapologetic. They taught me that fat isn’t bad and that people in larger bodies aren’t lazy, unhealthy, or unlovable.

Now, I must say, I’m in a smaller body. I have privileges that many people do not. My level of weight gain so far is still keeping me in a body that’s relatively accepted by society. I don’t know what it’s like to face discrimination based on my size.

I do, however, know what it’s like to hate your body and think that you’re broken. I know what it’s like to do the opposite of surrender. When I’m living this way I do things like workout until I’m ill, take my favorite foods out of my diet, and berate my body in front of other people. This is what waging war looks like.

Instead of doing this, I chose to surrender to weight gain. I make this choice every single day. I try to let go of my expectations and preconceived notions. I’m throwing my hands up in the air.

This isn’t a happily-ever-after story where everything is perfect. Rather, body acceptance takes rigorous work as well simply just letting myself be.

I’m continuing to enjoy my food free from disordered eating. This means no restricting; every single food is available at any time. You won’t hear me talking poorly about my body or about anyone else’s. I refuse to diet and I refuse to indulge others in their diets.

To counteract the voices that tell me I’m not good enough, refute them with “You’re worthy and lovable just as you are. Weight is just a number. You’re okay.”

Eventually, I started to believe these thoughts are true. Part of me thinks that maybe, just maybe, my existence on this planet isn’t for nothing. In letting go of the self-pity, a beautiful sense of self begins to bloom.

Surrendering is harder than you may believe. Internalized weight bias runs deep.

I think at times I come off as someone who’s super-confident in myself and in my relationship with my body, but it takes a whole lot of work to get to the point of surrender. The point of being free from the grips of diet culture.

I still poke at my belly, but mostly it’s with curiosity. If I feel disgust, I quickly try to turn my thoughts around to have compassion and confidence. I notice when my thighs are pressed against a bench. I smile, feeling thankful that my legs move me around.

I don’t step on the scale because I know that it can’t tell me anything about my worth. The numbers are irrelevant. I open my arms to weight gain, though sometimes taking a deep breath first. Accepting it means healing from a disordered relationship with my body and food.

Weight gain is an indicator that I’m living with joy in my life. I’m enjoying meals out with friends, snacking on treats at work, and taking seconds. I’m eating when I’m hungry, what a revelation.

I’m taking deep care of myself, and that may not look like other people’s definitions of self-care. That’s okay.

Fatphobia may say that I’m being stupid, but I choose surrender today. For me, that means throwing out lifelong conceptions that I’m not good enough. It means no longer running in circles chasing my tail, trying to lose weight. It’s opening up to the idea that there’s another way to go about this. It’s peace and joy.