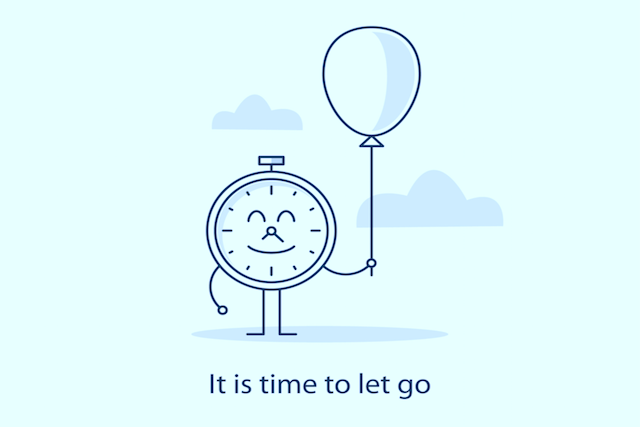 “Anything you can’t control in life is teaching you how to let go.” ~Unknown

So I decided to take a walk. The act of breathing in fresh air and hearing birdsong is centering for me. Just putting one foot in front of the other in rapid succession for an hour or two always helps to clear my head. I receive answers and guidance to my greatest questions when I’m walking. Call it a moving meditation.

As I set out that morning, my eyes were drawn upward to three hawks flying overhead. While their aerial dance looked choreographed and elegant, I realized that the hawks weren’t instigating the choreography. They were simply letting go and floating with the currents. They circled and circled above me, wings outstretched, sailing and drifting.

It dawned on me as I watched the hawks in flight that I’m rarely successful when I try to push or pull something in order to make it happen. Making an effort is noble and often necessary, but forcing something or worrying about it seldom yields the results you want.

Sometimes, you just have to let go of your tight grip of how you think things should be or how quickly they should come together and simply let things run their own course. By releasing control and letting the currents carry you along, paradoxically, you gain more control—of your attitude and your response to what’s happening to you at the moment.

Never was this truer in my life than when my mother was dying of cancer. My husband and I had decided that having Mom live with us would be the best solution. So, we rearranged our home, making one room her little oasis where she would be surrounded by her lovely things. Mom still wanted her independence, but it was no longer prudent.

I worked well into the night getting everything ready for her arrival from the skilled care facility where she was rehabilitating after a hospitalization. No sooner was she discharged from the nursing home and settled in at our home than circumstances changed and she ended up right back in the hospital again and then back at the nursing home for more rehab.

Later that same week, the unimaginable happened. I spontaneously and frighteningly became paralyzed from the chest down. My husband and I had been working hard to clean out Mom’s apartment. We’d been dealing as best as we could with her boomeranging back and forth to the hospital and nursing home. Then, all of a sudden, I needed medical care myself.

At first, there were those medical professionals who thought I was simply exhausted and that my illness might even be psychosomatic. However, an MRI revealed a large benign tumor called a meningioma pressing so severely on my spinal cord that I suddenly became paralyzed.

I was whisked by ambulance to the nearest large hospital an hour away, where a neurosurgeon who inherited my case soberly delivered the news that he was only cautiously optimistic I would ever walk again. I underwent the first of two surgeries to remove the tumor and release its pressure from my spinal cord.

While in the hospital, unable to move, I realized that I had no other choice but to breathe, relax, and let go. I found it easier, then, to accept what was, even if I didn’t like it.

All of my plans to care for my mother in our home were dashed. My mother’s care would have to be handed over to others at the skilled nursing facility. Mom would accept the situation. My work would have to just pile up. My employer would cope. My life was pretty much on hold as we waited to see how my spinal cord would recover from the surgery.

I never once gave up faith or hope that I would get better. I visualized my return to my sacred evening walks. I saw myself strong and nimble and able to do what I could to support my mother on her final journey.

But, I couldn’t plan at that point. I had to give in and let go. Like those hawks I saw overhead recently, I couldn’t allow myself to become impatient or to force the outcome. I had to ride on the wind and let the currents carry my wings.

We all have those times in our lives when we want things to be the way we believe they should be—the way we planned them to be. Alas, sometimes life has another path for us.

I believe that those things that are meant for us have a tendency to come our way and those doors that are never supposed to be open to us simply will not open.

Some of our desires will take longer to manifest than we would want. There will be those things that will turn out differently than we anticipated—sometimes better than we could have imagined; at other times, not so much.

Our difficulties and disappointments, however, have the ability to serve as blessings. Those blessings aren’t always clear at the moment, but with time, they often become visible.

After months of physical therapy, I did indeed learn how to walk again. And now I walk every day because I can. I am blessed.

For those of us who like to have a semblance of control over our lives, we will at some point learn that there are those times when we don’t have much say in what happens or how it ends. All we can do is be patient, filled with faith and buttressed by hope.

Our letting go of the process or the outcome gives us more space to consider what’s happening at that very moment and to control our attitudes and reactions. By being mindful of our thoughts and attitudes, we can avoid getting stuck in draining emotions.

It’s quite freeing to not have any preconceived notions, to be patient and to just let things flow. When I get out of the way and allow life to happen, the end result is often much better than I could have planned on my own.

Surely, I want and need to have goals, plans and dreams. That’s what helped me recover from my paralysis and regain the ability to walk. But, I’ve learned that I can’t be shackled by my desires and plans. Instead, I’ve learned to stop the tendency to prod or push. I’ve found that I can ride the currents, allow them to sweep me along, and all will be well.

When you let go and allow the currents to carry you, you’ll still move forward in life. Things might not turn out exactly as you planned, but the journey may give you more interesting scenery along the way. And in the end, you’ll have mastered control of what really mattered all along: What you thought and how you reacted to your circumstances.

Keri Olson is the survivor of three cancer diagnoses and two benign tumors—one in her brain and another in her spine that caused temporary paralysis. Through illness, Olson has learned the beauty and blessing of each day. She blogs about joy at timetobe-keri.blogspot.com. The author of two books, Olson is currently writing her third. She lives in Baraboo, Wisconsin with her husband Larry McCoy.

How to Survive Hard Times: 5 Lessons from Volunteering in a Hospital