Why Positive Thinking Didn’t Work for Me
By Lori Deschene 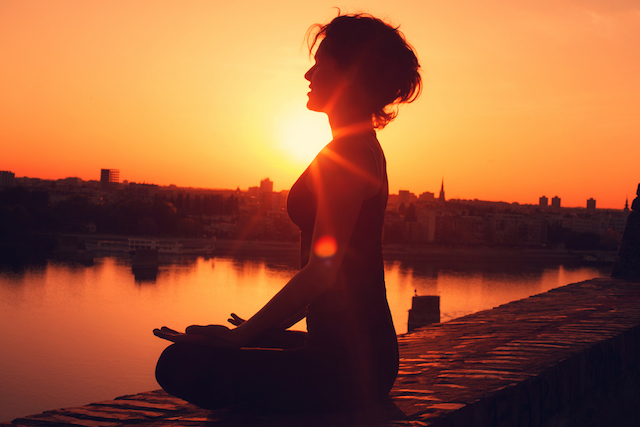 “See the positive side, the potential, and make an effort.” ~Dalai Lama

I was a perfectionist growing up, always trying to bang my flawed round-shaped self into a perfect square hole that couldn’t possibly contain me.

In my early twenties, I decided to focus on personal development—a positive thing, I assumed.

I figured if I worked on improving a little every day and nurturing a positive mindset, I’d feel a lot better about myself than I did when I got down on myself for my flaws.

I didn’t take into consideration that I might become a perfectionist about positivity.

That I might catch negative thinking and feel guilty about it instead of letting it go and moving into a more positive space.

That I might muster every piece of my will to avoid negative feelings and end up over-thinking them instead of simply feeling them and letting them pass.

Even when I tried to be positive, I was resisting the present. If only I was positive enough, I thought, I could create a better tomorrow—then I’d really be happy.

I tried on different positive hats in my pursuit of happiness.

I’ve told myself that everything really is in my mind—that if someone appears to be mean or inconsiderate, it’s largely a consequence of how I’m interpreting things. But then I started wondering if that’s the case, what’s wrong with my mind? Why do I so frequently assume the worst first and then have to catch it and change it?

I made lists of all the things my life would involve if it was more positive: I’d volunteer; I’d be open-hearted, always eager to greet a stranger with a smile; I wouldn’t fear lacking, and would freely give to anyone who needed it. Then I felt overwhelmed by the list of things I needed to do. Who has the time and energy to be that positive?

I’ve focused on things I appreciate in life by keeping a gratitude journal. Oddly enough, I stressed about that, as well. I felt guilty if I missed a day and continually measured whether or not I was doing enough to express gratitude in my daily life.

Positive thinking didn’t bring me peace because I was still the one doing the thinking, and I hadn’t really changed. I was still fighting, judging everyone and everything, including myself, and wondering when life would finally get easier.

No matter how positive I tried to be, it never worked because I wasn’t working for it.

Working for it, for me, involves just fifteen minutes a day.

I wouldn’t believe it if I hadn’t experienced it myself, but a brief morning meditation has a profound effect on me. When I start the day by sitting in silence for even a short while, my mental space transforms.

Without some type of contemplative practice, my busy mind gets overwhelming. Without taking time to clear my head, positive thinking is only moderately effective because there are just too many thoughts for the positive ones to have an impact.

I’d like to say I no longer over-analyze, get lost in my thoughts, or get hard on myself, but that’s not entirely true.

Even with tools that help me feel calm and centered, I still feel this way at times.

There are days when I fight with myself and the world and judge myself pretty harshly. It’s usually when I’ve stopped doing the things I know I need to do for me. When work gets overwhelming and people seem demanding, sometimes I don’t make those things a priority.

I am still imperfect, I still make bad decisions at times, and I still struggle with letting go. It’s called being human.

Growth is rarely a straight line. It’s more like an EKG monitor. It’s tempting to look at it with a sense of anxiety. To measure the peaks and valleys, wondering if the peaks are high and frequent enough.

But I’m learning that being positive means releasing the need to judge—to stop assessing what’s right and good enough, and whether I’ve been right or good enough, and approach each new moment with a sense of space.

It’s my job to create that space—to clear out all the thoughts that drown out the positive ones.

The biggest barrier between me and peace is my instinct to analyze why I didn’t, don’t, or might not have it. Stillness silences that instinct.

When I take time for stillness, it doesn’t matter how I interpret things because suddenly I stop telling stories about events as they happen to me.

When I take time for stillness, it doesn’t matter how many positive things I could do if I tried; I’m too busy putting good into the world to dwell on those lists.

When I sink into stillness, it doesn’t matter how many things I write in my gratitude journal; I’m too busy appreciating the world in front of me to worry about jotting it down.

Today, I feel peaceful. In this moment, I am not trying to be positive. I created space for myself to just be. And that, I’ve learned, is the most positive thing we can do for ourselves.