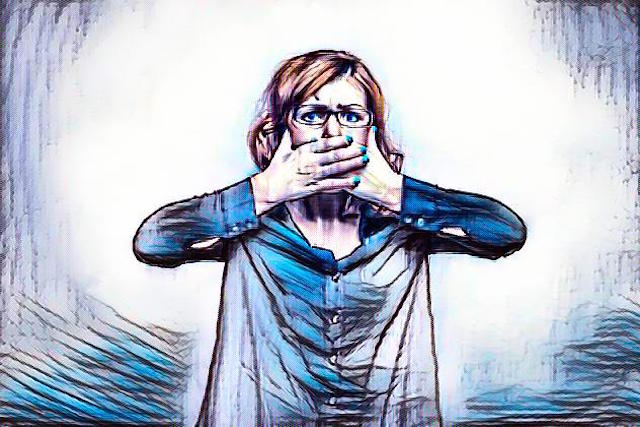 “Have the maturity to sometimes know that silence is more powerful than having the last word.” ~Thema Davis

It all started with the forks.

“You need to return my forks,” my roommate demanded one morning as I sat in the kitchen attempting to get some work done.

“I have already said that I don’t have them. We told you that the other roommate has been hiding them,” I replied.

She began raising her voice at me, “I can’t believe you would accuse her. You’re just a mean, nasty person!”

I slowly turned around and said calmly, “Today is my birthday, actually. So I don’t really want to have this conversation right now.”

She retorted, “I don’t care,” and then began to attack my character with a spiel of all the various other things I’ve ever done to upset her.

Perhaps she felt some kind of underlying hurt, but she would not share this with me. She was not telling me these problems so that we could work on them together to fix the hurt. Instead, she was insulting and attacking my very existence as a human so that I could feel hurt with her.

I could already foresee that nothing I could say was going to calm her down, so I chose to respond with silence. I suppose my silence pushed her over the edge, because she ended the conversation with “good luck with your miserable life treating people this way!” and stormed out of the room.

Well, that escalated quickly. All because of some missing forks. I continued on with my birthday as happily as I could.

Over the next few weeks, I waited for my roommate to come to me in a calm manner to resolve her issues with me, but she never did. Any chance she had, she continued to speak to me in a hateful manner, even though I didn’t engage her.

For some reason, my respectful silence made her angrier with me. I had held my tongue and kept my negative thoughts to myself, yet she still found a reason to hold on to her anger. This made it seem to me that she did not respect me or wish to resolve our issues.

One day she shoved me while coming in the front door at the same time as me. She went so far as to spread rumors that I was planning to break up with my boyfriend so that he would break up with me first. I remained silent and still as a tree.

Looking at things from her point of view, it seems that she was trapped in pain. A pain so severe she wanted someone else to feel it with her. She did not know another way to express her pain to me, so I will never know the true cause of it.

Luckily for me, she moved out shortly afterward. Though our relationship ended and our issues remained unsolved because of her lack of cooperation, I do not regret my silence for several reasons.

If you have hurt them, it is okay to acknowledge this and apologize. You are a human who makes mistakes. If they are unfoundedly attacking you, remember that they are speaking from a place of hurt that clouds their judgment.

In either situation, remind yourself that their negative view of you does not change your self-esteem and value as a person.

Oftentimes, flinging an insult is a reflection of their hidden insecurities and fears. True maturity comes from letting the hurtful words roll off your back without feeling the need to defend yourself, knowing that they are not a reflection of you.

Silence is not weakness.

Silence is harnessing your calm in a heated moment. Silence is a moment of Zen in which you can see the positive and negative coexisting together. Silence is the power to mindfully choose to stay out of the negative space, and not to say hurtful words back.

It takes true strength to hold your tongue and not succumb to negative energy. With time and practice, it will become easier and easier to ignore negative comments and continue on happily with your day.

Silence is not ignoring the problem.

Silence is the way to avoid saying things during a moment’s anger that you may later regret. Of course if the person has cooled off later on and wishes to speak to you calmly and respectfully regarding the matter, you should have a dialogue with them. Rational conversations are the only way to effective conflict resolution.

Silence is always in your toolbox.

When someone has an interpersonal problem that they genuinely wish to fix, they approach the other person from a place within their heart, a place of actual caring and love. If someone immediately attacks your integrity and character, they are not speaking out of love but out of hate. Hatred cannot solve problems, only love can.

When the other person is being intentionally hurtful, without regard for your feelings, you always have the choice to stay silent and walk away from the conversation. There is a point where no words will calm them down, and they simply want you to join in their anger. Reciprocating their anger and adding fuel to their fire will just make things worse.

Silence is always there for a moment of clarity.

Taylor Linn is a Cinema and Media Art graduate of Vanderbilt University, currently based in beautiful San Francisco, CA. She obsessively collected movie stubs and collaged fashion magazines into celebrity shrines as a teenager. She is pretty sure she is going to be reincarnated as a meerkat in her next life, but who can be 100% sure? Visit Taylor and her artwork at taylorlinn.com.

The Power of Silence: How to Free Yourself from Painful Thoughts