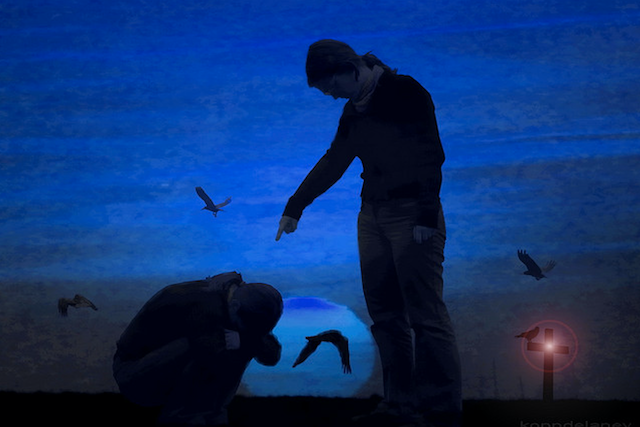 “To wish you were someone else is to waste the person you are.” ~Sven Goran Eriksson

How many times a day do you use the word “should” in reference to yourself or other people? I don’t know about you, but I used to use it a lot.

The word “should” has become a fixture in our everyday dialogue. We use it in conversation with others, as a way of motivating ourselves or keeping ourselves in check, and to express a myriad of feelings, including frustration, guilt, and regret.

As I’ve become more interested in my internal dialogue and how it affects the way I feel about myself, show up in the world, and live my life, I’ve started to realize just how insidious the word “should” can be.

Although I used to “should” myself about a variety of things, many times each day, I realized that telling myself I should be doing more or being more wasn’t actually helping me do more or be more, and it left me feeling like I wasn’t enough as I was.

Equally, I realized that when I told other people they should or shouldn’t do something, I wasn’t respecting their ability to make the best decisions for themselves. That didn’t fit with my personal philosophy (that people are free to do what they want as long as they’re not harming others), and I knew I wasn’t being the best friend or partner while I was using “should”-based vocabulary.

Since I had these realizations, I’ve been on a quest to replace my “should” with alternative vocabulary that is healthier and more accepting—both of myself and of other people. The longer I’m on this quest, the more I realize the damage the word “should” does to our self-relationship and our relationships with others. Here is what I’ve discovered so far:

Two Major Problems with Using the Word “Should”

When we use the word “should,” we’re not accepting reality. We’re talking about things that we wish were so, but aren’t (or vice versa). Whenever I used the word “should” when talking to myself, it was motivated by a lack of self-acceptance rather than encouragement.

As Dr. Shad Helmstetter explains in his book What to Say When You Talk to Yourself, when we tell ourselves that we “should” be doing something, we’re implicitly reinforcing the idea that we’re not doing it.

If we say to ourselves “I should really meditate more often,” the unspoken follow-up to that sentence is “…but I don’t.

Equally, if we say, “I should really be exercising this morning,” the unspoken ending to that sentence is “…but I’m not.”

In the long-term, when we tell ourselves or other people that we should or they should be doing something (as well-meaning as we might be), we’re reinforcing the negative, and the fact that we or they are not doing it.

I won’t pretend that removing the word “should” from my vocabulary has been easy, or that I’ve arrived and currently inhabit a “should”-free existence. I used to use the word “should” a lot and, in truth, I think it’s something I’ll have to keep an eye on for the rest of my life.

For now, however, I’ve found some alternatives helpful in overcoming my habit of “should”-ing myself and other people.

1. Focus on the benefits.

Instead of telling myself I “should” be doing more of something, I try to focus on why I want to do that particular thing.

Instead of saying “I should do more yoga,” I remind myself of why I want to do this: “I feel great when I do yoga a few times each week,” “I enjoy feeling myself relax and stretch out when I do yoga,” or “I feel a greater sense of self-connection when I make time to connect my body and my breathing in yoga.”

2. Focus on how the activity fits with your values.

One of the biggest things I used to “should” myself about was being on time. I struggled to turn up on time for work, appointments, meeting up with friends, and pretty much anything that was due to start at a set time. It was a constant battle with myself and, of course, telling myself “You should be on time” or “You shouldn’t be late” did nothing to change my tardiness.

3. Focus on accepting and exploring reality.

I used to think that I shouldn’t feel angry or jealous. I had heard they were “unhealthy” feelings to experience and had the belief that there was something wrong with me for feeling that way. No matter how much I told myself that I shouldn’t feel these things, however, they didn’t go away.

Removing the word “should” from your vocabulary will take time, patience, and practice. But it is possible, and it comes with great rewards. Replacing “should” with more helpful dialogue will lead to a kinder relationship with yourself, and better relationships with the people around you too.