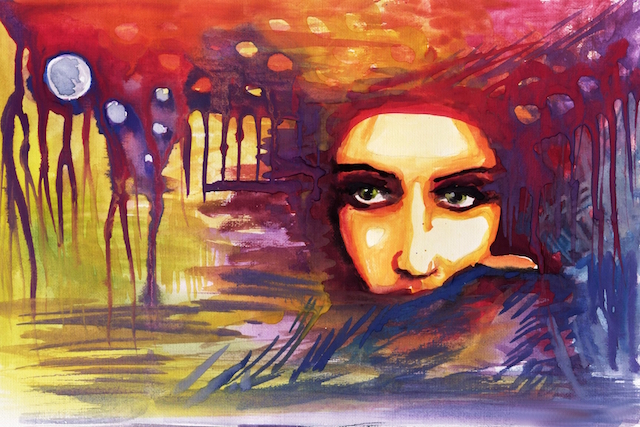 “That I feed the hungry, forgive an insult, and love my enemy…. these are great virtues.
But what if I should discover that the poorest of the beggars and the most impudent of offenders are all within me, and that I stand in need of the alms of my own kindness; that I myself am the enemy who must be loved? What then?” ~Carl Jung

Mornings are delicious in the desert. In a summer climate that pushes above 100 degrees day after day, you learn to appreciate lingering cool gifts of pre-dawn hours.

I’m typically awake by 5am these days. It’s the best time to open the windows and door to the patio to let new air in.

On occasion, a sporty cactus wren has seen the open door as an invitation to come inside and have a look around. I delight in their curiosity and spunk, hopping from the doorway to the lamp on my desk, pausing to assimilate data before zooming out again.

One day, a bee flew in and did not have nearly as much fun as the wrens.

The bee went straight to the screened window, just a few feet from the open door, and stubbornly tried to will himself through. Up and down the screen, buzzing against it, the same spot many, many times with no success.

On the other side of the screen, a leafy shade beckoned, but he could not get through. I watched and wondered why the bee continued to try the same thing repeatedly with no success. Not even a hint of success.

Can you dig the metaphor? In what area of life could you be stuck in a similar scenario?

We say we want happiness, peace of mind, harmonious relationships, someone to trust us, a more fulfilling job, healthier body, less stress, substantial joy. We say we want that, but we are so often the bee in the window, flying into the screen between us and the place we want to be.

A fresh perspective may reveal a nearby open door.

Years ago, I was the target of an unpleasant display of road rage. It was a simple scenario: I was going seventy miles per hour in the far left lane with another car parallel in the middle right lane. A hulky pick-up came hurrying up behind me and wanted to pass.

He rode my bumper and flicked his lights to make sure I knew. To effectively get out of his way, I would have had to speed up past my desire and overtake the car to my right. It was a no-win situation for me, so I let it go and assumed he’d find another way around.

Eventually, he succeeded: furiously zigzagged backward then forward, crossed three lanes, and zoomed into the path ahead of me. It was an impressive, totally reckless feat. As he moved in front of me, he stuck his muscular, tanned arm out and gave me the bird with a stiff, angry fist and explosive finger.

Apparently, I upset the guy. Not only was seventy miles per hour too slow, it was personal; it was something I was doing to him.

Maybe he thought the other car and I were in on it together, conspiring to block his lane. Maybe he was in a crisis—though, why bother summoning energy to get angry at me when you’re focused on solving an urgent dilemma?

Why do we get so angry in traffic? Or in check out lines? Or in so many similar scenes played out with people we don’t even know?

Why isn’t seventy miles per hour (essentially a mile a minute) fast enough?

The challenge for me in that moment was to find the right question. Mostly, I felt bad for the guy, dosing himself with such an ugly gesture. His roar that did nothing to improve the spin of the planet or make his day roll smoothly.

From his perspective, I jammed his joy. From my vantage, he could have swiped mine. I chose to keep mine and wish for him to find his.

If we stop flying into the screen and look for a way around, much of the tension dissolves. Flipping me off with muscular anger may have seemed like a path to satisfaction for the guy on the road, but my guess is it took a painful bite out of his soul.

Watching an old episode of “House” adds another layer. Dr. Chase was preparing to speak to the hospital review board regarding a case of negligence. While the gist of the plot focused on ramifications from his mistake, the bigger story was about lying and truth telling.

I wish I could go back and count the number of times one character said to another: “You’re lying.” Every time, it turned out to be an accurate call. Everyone lied repeatedly, about big stuff as well as little stuff, and they constantly called each other on it until deeper truths were revealed.

We seem to lie because we fear consequences. If I tell the truth now, I’ll get fired, sued, rejected—consequences imposed by an outside force. It’s a convenient explanation for why we side-step honesty, even when we know being upfront is the most direct path to repair and clarity.

I believe we lie, not because we fear what “they” will do to us, but to avoid internal consequences; self-awareness unavoidably brings on a lot of responsibility.

In this particular episode of “House,” Dr. Chase lied and said he wasn’t tuned in to the patient because he had a hangover; in reality, he was grief-stricken by news from home.

Claiming he was negligent due to a hangover demands harsher consequences than the more human (and accurate) version of the story. So what advantage did the lie provide? When we deny the real cause, we relieve ourselves from having to do anything in response.

More often than not, our lies serve to keep us in the dark, internally fragmented from areas of self unattractive to our conscious mind. Even more stubbornly, and more damaging, we lie to avoid the deeper reality of our greatness.

This is the part to watch out for. We don’t just seek to avoid negative consequences; we also lie to avoid the responsibility of our own loving nature, the full potential of creativity or expansiveness of an authentic self.

The guy on the road lies to himself when he says: we’re not all in this together; it’s me against them and they suck. That’s an internal lie designed to protect the self from having to accept the call to do good. Let off the hook in that regard, he’s free to throw his tantrum while a powerless power surges through.

Each of us has the potential to enhance this world and our experience of it, in any given context. Tapping that potential demands more discipline than we may be willing to cultivate.

Happiness is the exotic commodity in our world. True peace of mind, resonant joy, sparkling sense of self, and purpose—all exotic to our distracted sensibility. The many miles between us and this exotic honey are cobbled by dishonesty, fragmentation, and fear of responsibility.

But discipline isn’t “hard” and it’s not a leash restraining passion. Mindfulness is harmony. When all of our parts are working together, life hums around us.

The bee catches a breeze and is blown off course, through the open door.

The driver turns up the volume on a song, a good memory, a heartbeat and overlooks momentary annoyances. Then, arriving at his destination brings more of himself to the party. The doctor admits his grief—or his need for love—and the world is healed.

Laurie Perez (Joybroker) is a mentor, mediator and guide to enlightenment in everyday circumstances. Author of Inner Garden and WakeUP and creator of leading edge events like Arizona Tempest, Vivid Dinner and Head Over Heels, Laurie builds bridges for cubicle slaves to cross into the lyrical world. Like Joybroker on Facebook or tweet @joybroker on Twitter.

Develop Self-Confidence: 7 Lies You Need to Stop Telling Yourself