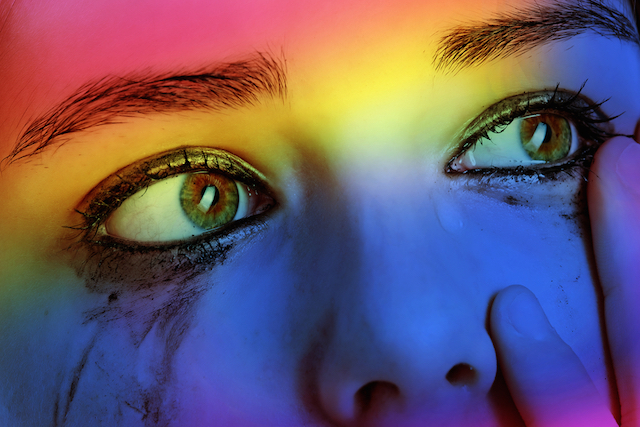 “For a seed to achieve its greatest expression, it must come completely undone. The shell cracks, its insides come out and everything changes. To someone who doesn’t understand growth, it would look like complete destruction.” ~Cynthia Occelli

The whole time I was growing up, I was told, incessantly, that I was “too sensitive.” These words, when I first heard them, came from the mouth of the person I vowed I would never become.

And yet, as I grew up, these words didn’t stay within the darkness of my childhood home. They began to roll out of the mouths of kids on the playground, boyfriends, classmates, friends.

“You’re turning really red. Are you, like, really offended right now? You should take a chill pill.”

Often, my reaction was to a joke—an insulting one. I’ve never liked insult humor, and yet it’s followed me throughout my life. It was (and still is) there in my Eastern European origins and it was there every step of the way when I came to Canada as an immigrant.

They were right. I just couldn’t take a joke.

Each time this would happen, I would own it. Yes, I was too sensitive. It was my fault. I had to try to hide it better. I came up with all these tactics to hide my volatile emotions, but they failed.

“Wow, you get really red—like a tomato!”

“Hey lighten up, you take things so seriously.”

I left the toxic environment of my childhood when I was seventeen years old, having counted down the days until I could be free. An old journal of mine from around then says: “I’m so glad I’m over the past.” I thought changing locations was the end of the story.

I had focused so much on getting free that, when I got to that freedom, I didn’t know what to do. Slowly, I developed serious mental health issues that grew from not healing. I became more than just sensitive. I became what my ex called “crazy.”

After my first relationship—which quickly turned into mutual emotional abuse—dissolved, something broke inside of me. I became cold, distant, intolerant. I began to make comments about other people being too sensitive when they reacted, because I no longer did.

And you know something? It felt good. It felt so good to, for once, not be the one that felt ashamed of my emotions. I felt powerful. I felt like everything would be okay.

I became everything I had fought so long and so hard against: loveless, distant, cynical. I became the bully I once feared. I began my journey to become the abuser I vowed to leave in my childhood memories.

Thankfully, I had a breakdown. I say thankfully, because those weeks of unbearable pain were nothing compared to a lifetime I could have lived as yet another abuser recreating her past.

As I allowed myself to feel again, I felt a flood of regret and guilt for the people I’d hurt. I felt terrible about shaming those emotions in others that I’d had shamed in me. I used this feeling to forgive the people who had hurt me, realizing that their actions were by-products of abuse in their pasts as well.

When we get ignored or put down, it hurts. It leaves a wound. And then, when we’re in a safer situation, that wound tries to heal.

Each time I reacted emotionally to a situation that didn’t seem appropriate, my wound was trying to heal.

Each time I would react to a joke with pain, my wounds were trying to heal.

Each time I’d get this rush of anger or anxiety or self-hatred, triggered by some little thing someone did that reminded me of the abuse of the past, my wounds were trying to heal.

But what did the world say?

When I needed someone to hold me while I cried about being insulted and pushed down, after being triggered by something little and silly, people would say “You’re too sensitive.”

When I needed someone, anyone, to just look at what was happening in my life and listen to me, having no communication skills and able only to start drama, people would say “You’re doing it for attention.”

I came so close to killing myself before I had a breakdown. If I had, wouldn’t they have said, “We didn’t see it coming”?

Abuse has been rampant in my family for generations. In my work, I see every day how rampant emotional abuse is in our society.

Abuse makes people “sensitive.” I put this in quotation marks because there’s a difference between perceiving a person’s sensitivity as a characteristic and perceiving that person as having gaping wounds, which are sensitive because they’re healing.

And our cultural tendency to push down the healing process in those who have been abused is the most silent killer of them all.

As soon as we get hurt, we start to heal. This goes for paper cuts as much as it goes for emotions. We can allow that healing, or we can block it.

Those who appear outwardly sensitive and touchy are actually doing something incredibly brave. They are choosing to stay with their emotions, which are pathways to healing, instead of shutting down and joining the abuse statistics.

So next time you hear someone being called too sensitive, know this: there are only enough times a person’s healing process can be repressed before they can’t take it anymore. And the way a person breaks out is either through ending their life or ending their emotional life by becoming abusive themselves.

This is happening everywhere, and we can all do our part to stop it.

Jon Briere said, “If we could somehow end child abuse and neglect, the eight hundred pages of DSM […] would be shrunk to a pamphlet in two generations.”

We can all do our part in this, and the way we can start is by understanding the connection between emotional release and healing, by allowing people to experience emotions in front of us without judging or backing down, and by allowing ourselves to experience those emotions, to heal, and to find people who will allow us to do so.

Like this, we can build a better world together. But we can’t do it alone. We need you. We need all of us.

The 11 Most Common Myths About Highly Sensitive People