Dealing with Conflict: Speak Up Before You Blow Up
By Stephen Light 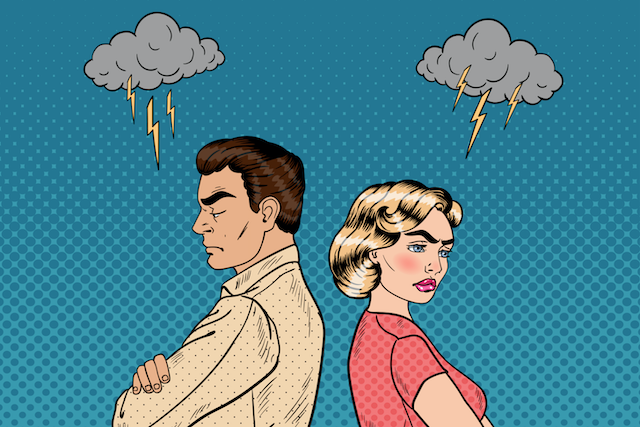 “To be beautiful means to be yourself. You don’t need to be accepted by others. You need to accept yourself.” ~Thich Nhat Hanh

“I aim to please. It’s okay, no worries. Please don’t worry, its no big deal.” These are some things I’ve said when interacting with others. The truth was that it wasn’t okay, and it was inconveniencing me.

I could never voice this to people. What if they didn’t like me? Growing up I learned to be polite and to respect my elders, so I considered it rude to tell someone that what they are asking for or what they are doing is actually not okay. I also didn’t want to create any unnecessary problems or conflict.

I always seemed to end up doing things I didn’t want to do or helping people with things that they should do themselves. I would get frustrated and annoyed and end up taking it out on those people who are close to me. Why did I do this?

I was sitting in an aisle seat on an airplane once when a man asked me if I wouldn’t mind swapping with him. His friend was sitting next to me, and he wanted to talk to him. The problem was that this guy’s original seat was near the back and was a middle seat.

I didn’t want to do it, and yet I did. I reluctantly smiled and said, “Sure, no worries.” I then sat in the middle seat on the flight between two very large passengers, feeling cramped and annoyed. This is when it all started going wrong.

It never rains but it pours. The passenger in the window seat wanted to go to the bathroom, so there was a lot of climbing in and out of the seats. I just smiled and said, “No problem.”

The meal cart arrived, and because we were at the back, they had run out of the vegetarian choice, so I had nothing to eat. I just said, “Not to worry.”

My bag was in the compartment above my original seat, so I couldn’t just stand up and get my book. The guy next to me was reading the paper, and it draped into my space. I couldn’t really say anything, because, as you know, reading a newspaper in the confines of an airplane is difficult, and he was trying.

The other guy next to me was hogging the middle arm rest. My justification was that he was a big guy and he was cramped, shame.

I was fuming inside because I did not stand up for myself and for what I wanted. I started blaming the guy who was sitting in my original seat for how I was feeling. If he had just stayed in his seat then none of this would have happened. This was the story of my life.

The truth is, I was a people pleaser and didn’t like others to be inconvenienced. I would rather have been inconvenienced than let them have to go through that.

I had learned from an early age to teach people how to treat me. I was teaching them that it was okay to take advantage of me, because deep down inside I believed I was not enough.

My key insights that pushed me to change were:

“Conflict is a natural disagreement resulting from individuals or groups that differ in attitudes, beliefs, values or needs.”  ~Anonymous

This simple statement helped me realize that conflict is natural and a given. The world is full of conflict and it would never go away. I just had to learn to deal effectively with conflict. This required that my inner emotional state needed to be able to handle the conflict without taking things personally and getting upset.

I started seeing conflict as good, as it allowed me to speak my truth. I learned that I was not responsible for how others felt about my choices as long as I was not being selfish or offending. I started standing up for myself, and my experiences shifted.

I had to realize that my needs were important, as they expressed my inner desires. If I wanted to start living a great life, I had to start living it for me. This meant I had to make my choices real by voicing them. This did not mean that I did not see others’ needs as important. It just meant I gave a voice to my needs, which I had never done before.

This was not easy, as I had to change. People resisted this new me and there were some people that didn’t like it. Instead of rejecting them for not accepting me, I loved them harder. I just ensured they understood that these were choices for me, and not against them.

Speaking Up Without Blowing Up

Now that I understood conflict to be natural, and that all I had to do was voice my opinion, I just needed to know how. I wanted people to know what was important for me. I needed to be able to take responsibility for my needs and for expressing them.

I needed to change how I spoke. I wrote down all the things I used to say that put my needs second and I wrote out a list of ways of expressing my needs so they were first. I then practiced these statements and made them so real to me. A few examples include:

We have to accept ourselves to be accepted by others, and we have to teach people how to treat us. We deserve to be treated like the amazing, beautiful souls we are.

Stephen loves people and sees them for their potential, not the behaviors they display. His purpose is to connect, share, serve, and grow. He sees his life as a journey and loves that he can make a difference in people’s lives. Visit him at peopleactiv.com, on Twitter, or on Facebook.

Why Conflict Isn’t Bad (And How to Make It Easier)