You Don’t Have to Appear Perfect: It’s Okay to Admit You’re Flawed
By Craig Boneau 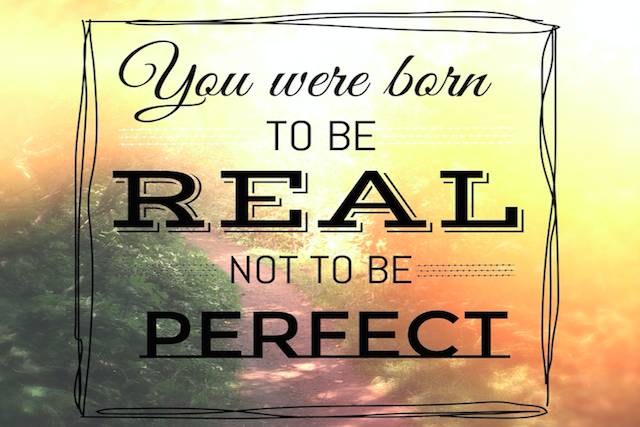 “Out of your vulnerabilities will come your strength.” ~Sigmund Freud

If you’re anything like I was, you have an image of yourself that you want other people to adopt. You think people expect that of you or would like you better if that’s who you were, so you pretend to be that person.

Over time, you put on layers of protection to prevent people from seeing the imperfections that would undermine that perception. You refuse to admit to those imperfections. You may also blame others, the weather, or fate for any perceived failure—anything but yourself.

As a result, you can’t interact with people in a real way because you can never let your guard down and be yourself. So your relationships are less than they could be.

And you can’t really grow, because that would involve admitting you have a weakness.

I spent decades trying to live up to the image I thought people wanted and expected of me: the golden-boy, the successful one, the smart one.

I am an only child and the oldest kid in my generation in my family. With that came a lot of pressure, mostly self-imposed.

I got good grades in smart-kid classes, I didn’t drink, I didn’t do drugs, I started on my high school basketball team, I could do things on my own without help, I didn’t make mistakes.

The problem was I did make mistakes. For example, when I was seventeen I wrecked my friend’s car because I didn’t look before I pulled into traffic, but I blamed the clutch.

After a basketball game in which I missed a few free throws, at the next practice, our coach put me on the free-throw line and made me shoot until I made two in a row.

Every time I missed, the whole team had to run except for me. The team ended up running twenty times before I finally hit the free throws. Instead of taking responsibility for not putting in the work to make sure I made the free throws, I blamed the coach for putting me in that “unfair” position.

When my college relationship broke up, I blamed my girlfriend for being clingy and selfish. But the reality was that we just weren’t right for each other and it had as much, or more, to do with me than it had to do with her.

What I perceived as clingy and selfish was just her totally reasonable reaction to my fear of commitment and my resulting withdrawal. Not recognizing that it was mostly my issue led to a series of relationships where I made similar mistakes, always concluding my partner was clingy—until I finally took a look in the mirror and recognized the only consistent variable was me.

In each of these examples, and countless other times, I just ignored my mistake or made some excuse for it and kept moving on because recognizing it wouldn’t fit in with the perfect version of myself I thought everyone expected.

The more time I spent being this polished up version of myself, the more removed I became from who I actually was. And it just built on itself all throughout adulthood.

In fact, even when I started being okay doing things I would have perceived as a mistake when I was younger, like drinking socially, I wouldn’t do it around my family. Not even at holiday functions when everyone else was drinking.

I felt like I needed to live up to the idealized version of myself that I envisioned they had. So I kept up appearances.

The longer I lived that version of life, the more difficult, almost impossible, it became for me to grow, because to do so meant I had to recognize I did actually make mistakes and had room to grow.

It may sound like I was conceited and super full of myself, but that wasn’t really it. It wasn’t that I believed I was perfect; I just needed everyone else to believe I was, which meant I had to pretend. I was terrified of anyone finding out it wasn’t true.

When I finally came to terms with the fact that playing perfect (unsuccessfully, I might add) was a terrible way to go about being happy, having real relationships, and making choices in life, it was terrifying.

It meant I had to do something I never really had before—admit weaknesses, admit I needed help with things, admit mistakes were my fault, not someone else’s or just bad luck.

Peeling off the layers of protection is an ongoing process. But it has allowed me to reach out for help and truly grow as a person for the first time in a long time.

Ironically, becoming vulnerable has allowed me to get closer to being (although certainly not actually becoming) the person I pretended to be for so long.

It can do the same thing for you.

You Aren’t Sir So and So, Take Off the Knight-like Suit of Armor

Being hurt sucks, whether it’s physically, mentally, or emotionally. So we protect ourselves from pain.

And we are generally good at minimizing the physical kind.

Our lives are climate-controlled, we rarely feel the pangs of hunger or a desperate thirst, we treat our illnesses and minor aches with medicines that knock them out before they really get started, and we rarely experience the loss of a loved one before old age.

All of that is great, and a fairly good list of why we should be thankful to live in the modern world rather than any of those that preceded it.

But we also spend a lot of energy protecting ourselves from the type of emotional pain that comes along with being authentic and vulnerable, admitting our weaknesses.

And, ironically, that causes us significant emotional pain because having to always be a shined-up, polished version of ourselves is hard and stressful.

Plus, it cheats us out of the type of emotional pleasure we want because when we aren’t authentic with people, it’s very difficult to have authentic emotional connections.

It also blocks our growth.

The longer you act as though you are perfect the way you are, the harder it is for you to see where you need or want to grow.

You become so used to acting perfect, you start to believe it. Maybe not intellectually, but subconsciously, you think, “I’m pretty good as I am. I just need a lucky break and then I’ll be happy and successful.”

And when you start putting the focus and power on your future success on something external like “a lucky break,” you fairly quickly lose any motivation for self-improvement and instead just sit around doing what you have been doing, waiting for fortune to smile on you one way or another.

This is not a great formula for improvement, or success for that matter.

Also, not being vulnerable makes it is difficult, if not impossible, to recruit anyone else to help you because to do so, you have to admit you aren’t perfect.

So how do you start this process?

The first step is to the difference between who you are and the version you show to the people in your life.

This will take time, because (if you are anything like me) you have been play-acting “super-you” for so long that it’s actually hard to tease out the difference. That’s okay.

Start small. Just listen to yourself talk to people over the next couple of days. In what situations do you say things you really don’t believe so that you can fit in? Are there particular people that you do it more often with?

Once you’ve identified your situations where you tend to cover up your flaws, the next step is doing something about it.

When you find yourself in the situations in which you tend to be less than honest about who you are, be diligent about being true to yourself. Stop yourself, or even correct yourself if you say something dishonest.

If you can start to be vulnerable in those situations, it will start to be much easier to do it throughout your entire day.

That has certainly been the case for me.

For a long time I regularly covered up my faults and weaknesses with my family because I desperately wanted to meet their expectations. So when they asked, everything was always great. School was great, work was great, and my relationship was great, even when they weren’t.

Once I decided to just be real with my family, my relationships with them, which had previously felt inauthentic, plastic, and rigid, started to warm, soften, and deepen.

The other situation where I was rarely, if ever, willing to admit mistakes was in athletics. When something went wrong while I was playing, it was always bad luck or someone else’s fault.

When I recognized my tendency to be inauthentic in team situations, and embraced it, taking responsibility when things were my fault, a couple things happened.

One, no one kicked me out and judged me as incompetent (which was my fear), and two, I was able to get help to get better at things.

Taking strides toward admitting my imperfections in these areas carried over to other situations too.

For example, I am now much more likely to admit that I did something wrong at home or in my personal relationships.

When you allow yourself to recognize you aren’t perfect, you will also be able pursue growth, stop making the same mistakes over and over again, and deepen your relationships with everyone you interact with.

Shedding the layers of protection you have put on over the years is hard, but once you give yourself permission to do it, the freedom will feel tangible. You will breathe an exhilarating sigh of relief.

And once you’ve started the process, the momentum will carry you. You will start living a life and having relationships that are true to you, not to whatever you thought everyone else wanted from you.

And it is all within your power. You just have to decide, and then do it.

You were born to be real image via Shutterstock