You Have a Choice: Your Future Can Be Better Than Your Past
By Liz Goodchild 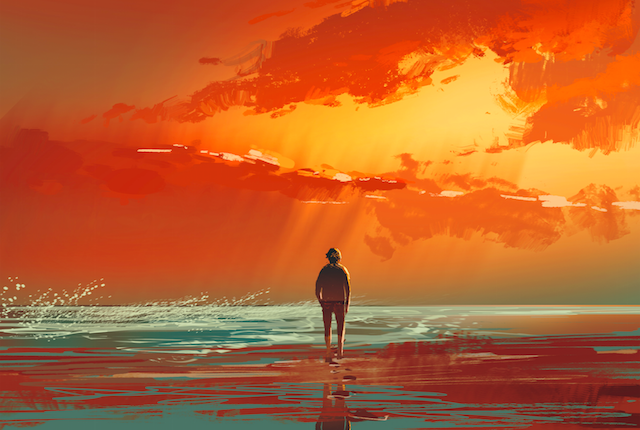 “Someone I loved once gave me a box full of darkness. It took me years to understand that this, too, was a gift.” ~Mary Oliver

On the January 17, 2000, I was in a car crash. I was living in France at the time. I don’t remember much about the crash. I know that we all walked out of the car relatively unscathed. Shocked, scared, and confused, yes. Injured, no.

I remember thinking that I should probably call my mum and dad back in England. Tell them what happened. What I didn’t know in that moment was that back in the UK, I didn’t have a mum to call anymore.

That same afternoon, on the 17th January 2000, was also the day my mum had decided to take her own life.

I found out about my mum’s death standing in the reception of the hotel we had walked into after the crash.

That’s all I heard at the other end of the phone. It’s all I had to hear. I knew. It was my sister’s voice. She’d managed to track me down in the hotel.

It’s weird because I remember thinking in that moment, “Okay, my mum has just died and I now have to tell some people I don’t know that my mum has died, and I don’t want to put them out or get them all upset, so I’ll just be matter of fact and straight up and not cry.”

Matter of fact. Straight up. I won’t cry. And that’s how I chose to deal with the aftermath of my mum’s death.

While everyone fell apart around me, or grieved, I was the one who was totally okay. I was so together and dealing with it quietly, like I was totally fine.

I remember one day, standing at the checkout of a supermarket, I stood next to my dad as he fell apart while we were packing cans of baked beans into the carrier bag.

I looked at him, the giant pillar of a man I had always known—wracked with the most intense grief for his wife—and thought, “I am alone in this. I’ve got to be strong because no-one else will be.”

I returned to France three weeks after my mum’s death. I couldn’t wait. I spoke to no one of her death. People knew, of course, but death is weird, isn’t it? It shuts people down. Especially suicide.

Back in France, I got drunk a lot. I was the first person at the party and the last one to leave. If there was something stupid to do, I was there, the life and soul, but if anyone got too close I’d push them away.

I was the master pretender. The chameleon. Always fun and happy and having the best time, yet on the inside it was ugly and dark and I was wracked with grief that was so painful, the only way I could cope with it was to numb it out. To not allow myself to feel anything.

I started developing strange behaviors about seven years after my mum died. The grief that had been locked in the box in my head for so long finally exploded, and it manifested itself not by crying and grieving, but in horrific anxiety and OCD and really weird thoughts that freaked me out.

I also started to wonder what it would be like to not be alive anymore. To not have to walk around and be the girl whose mum killed herself and deal with all the crap that came along with it.

I remember walking past a huge wall one day and wondering what it would be like to climb to the top and jump off it. I wondered whether the impact would kill me.

It was in that moment, staring up at that wall, that I actually felt something for the first time. And that feeling was relief. Relief that I had a choice. A choice of whether I lived or died. A choice in my future.

As numb and as twisted as I felt right there in that moment, I remember smiling. Because it was up to me what happened next. I chose to walk away from that wall. To start living again even if I didn’t know what that meant exactly at the time.

I decided to not let my mum’s death, which had dogged me for some many years, become a reason to end my life too.

And I don’t just mean end my life by suicide, but to end my life emotionally, to shut down, to numb out, to allow what happened to become my story—the story of someone who shirked away from her own life because her mum killed herself and the world now owed her something for taking her away.

But guess what? The world didn’t owe me anything, and the world doesn’t owe you anything either.

We are all victims of something that has happened in our lives. We ruminate and torture ourselves with things that were said or not said, and about what happened or didn’t happen or things that haven’t even happened yet.

We react to things like a tightly coiled spring, red raw from experiences and situations that lie well in the past. And yet most of us allow our past to build our future.

It’s the reason why you can’t commit to men, because your dad walked out when you were five, or you don’t make friends easily because of that one moment in the playground, aged eleven, when the popular girls made fun of your glasses.

It’s the reason you go to work to a job you hate every day, because you decided early on in life that you weren’t good enough and that you’d just settle for less than.

It’s the reason we make so much meaning out of things. You receive a text message and they don’t end it with a kiss, or someone signs off their email with “regards,” and your immediate thought is, “What did I do?”

You see your boss walking toward you in the corridor at work and you say hello to him, but he keeps his head down and doesn’t respond. “Oh my god, why did he not say hello? Maybe I’m one of the ones who’ll be made redundant?”

We attach so much meaning to everything, don’t we? And yet here’s the thing. There’s what happened and our story about what happened, and assuming the two things to be the same is the source of much pain and unnecessary self-suffering.

Some people just don’t like leaving kisses at the end of text messages, and your boss just found out his wife has cancer and didn’t notice you walking toward him in the corridor, and Barry in accounts doesn’t think that “regards” at the end of an email sounds rude because Barry is more interested in getting the email written and sent so he can leave at 5pm, and fifteen years ago my mum died.

You’re not five anymore. You’re not eleven and I am not the eighteen-year-old girl whose mum blew out the candle without saying goodbye.

You only have one life. And yet you always have lots of choices. About how you respond to what has happened to you in your life and what you do with it as a result.

We can become wrapped up in darkness and negativity, blaming everyone and everything, or we can take from what has happened and learn something about ourselves.

My favorite poet, Mary Oliver, wrote in her Thirst collection, “Someone I loved once gave me a box full of darkness. It took me years to understand that this, too, was a gift.”

And now, writing this, fifteen years after my mum’s death, I feel grateful, not that she died, but that amidst the heartache and the grief and the intense loss, I found out who I was.

And I did so because I made a choice. To show up. To live the life that I wanted to. To take responsibility. To rewrite my story. To not just be the girl whose mum killed herself. But to be the woman who chose to decide that my future is bigger and better than my past.

And I invite you to do the same.

Liz Goodchild is a life coach. She helps people make their lives better. (Think: Getting unstuck, making decisions that feel good, and doing things they think they can't.) You can find Liz over on Facebook and her website.