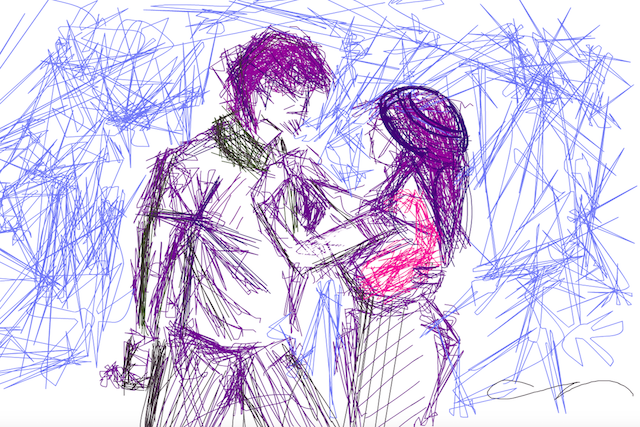 “Your task is not to seek love, but merely to seek and find all barriers within yourself that you have built against it.” ~Rumi

My ex used to stomp out of the house every time we had an argument.

Literally, he would leave. And usually before he left he’d smash something. One time it was a lamp; another time it was a cast iron skillet and the tile floor it landed on.

He would stay away for about an hour, driving his sports car really fast to let off steam.

I know this because when he returned, he’d tell me that his sports car helped him deal with the frustrations I caused him.

All I wanted to do was talk. I was having a problem and I was under the impression that people in a relationship were supposed to solve problems by discussing them.

But somehow, our discussions would turn into arguments.

And maybe a third of the way through the argument, I would have no idea what the initial discussion was about. The conversation would have turned so many corners that I’d need a map to get out. And the argument would usually end by me not understanding his feelings.

It was very confusing to me.

I found it hard to maintain a civil conversation when I wasn’t even sure what we were talking about.

So after a few years of this, I learned to stop having any discussion about anything that may have upset him or me.

The marriage lasted twenty-four years, and for about fourteen of those years I kept my feelings between my friends, my family, and me. I kept my feelings away from my spouse, the one I was supposed to be telling all my hopes, thoughts, and dreams to.

I agreed with almost everything he wanted. I moved where he wanted, I cooked the way he wanted me to, we bought things he wanted. I was living his life, not mine.

Let me be clear, we lived an outwardly enviable life. By most standards, we had everything that money could buy, plus some.

I wasn’t complaining. We raised two beautiful boys, lived in a resort town, had a beautiful home, entertained, and had many friends. We were involved in the community and were both successful business people.

From the outside, our marriage was beautiful. Friends commented on how our marriage seemed so together. It seemed as though we had the world at our feet.

I was always surprised by these comments—not because I felt like we didn’t have it all together, but because there was something missing. I just couldn’t put my finger on it.

After my daughter was born, things started going south. The boys grew up and went to college. I was looking forward to getting our relationship back on track, but he had other ideas.

He was scared for the future, scared to death—what would we talk about? Wow, all I wanted to do was talk. What to talk about was the least of my worries. It was then that I realized I was in a marriage with a man who was afraid to communicate, to show his vulnerability. It was a lonely place to be.

So he found someone else he could communicate with and left the marriage. He recognized that I could not give him what he wanted.

I wish I had been that aware.

Five years have passed since then and I am dating. I have met a man who I really like. I am falling in love. He is kind, honest, has amazing integrity, and we have a lot in common.

But in this new relationship I’ve put up many walls. Here’s one wall I recently knocked down:

My doctor called me regarding a minor medical test I had done. There seemed to be a problem, and he wanted to run some further tests.

So I went to his office. He told me that he was going to biopsy some cells and send them off, and if they were cancerous I shouldn’t be alarmed.

Okay. I don’t know about you, but I think the words “cancer” and “don’t worry” should not be allowed in the same sentence.

I wasn’t worried; I was beyond worried. I was convinced this was a death sentence!

After the biopsy, I called my friend. I lamented and cried. I was sure my life was over. And the worst part was that I was absolutely convinced that my new boyfriend would dump me.

He had lovingly nursed his wife through cancer only to lose the battle. I was sure he would want nothing to do with a girl with health problems, and that he would run for the hills. After all, that’s what I was used to.

So I didn’t call him—at least not then.

I went home and fretted. I got caught up in my thoughts. My thoughts told me that I was no good. That, although I have been healthy all my life, this one diagnosis was being thrown at me to ruin the potentially wonderful relationship I had landed in.

I had worked so hard to find a man that could communicate in an open honest way, and now this?

After dinner, I calmed myself down and got up the nerve to call my boyfriend. I told him the results. There was a moment of silence and he asked me, “Why didn’t you call me earlier?”

I had no idea how to respond.

“Um, because I was afraid you would leave. I will give you an out if you don’t want to deal with this situation.”

There was a longer pause on the other end.

“Why would I want to leave?”

I stammered, “Because you shouldn’t have to deal with a situation like this after what you’ve been through.”

“Melissa, a relationship is about two people who care for each other. It’s not about leaving when something goes wrong. It’s about being there for the good and the bad. We’ll just have to work through this,” he lovingly replied.

Really? There are actually people like this? Wow, this wasn’t what I was used to.

I was sure he had a bunch of Hallmark cards in his lap, and the pauses were so he could sort through them to make sure he said the right thing.

I was honestly dumbfounded.

I lived in a marriage where one minute I was told I was loved, and the next minute he would leave. I had learned in my marriage that when the going got tough, you split. I had no idea that someone would want to hang around and want to help me through an ordeal I was facing, I was so used to going it alone. I had no idea what a real relationship was.

A habit had been formed in my life that when things got a little bit difficult, which it inevitably does, that if you just get rid of the difficult situation, life will go on smoothly. Just sweep the problem out the door.

My new relationship was teaching me love is strong, love is kind, and love sticks around.

I had spent so much time trying to convince myself that I had everything in my relationship that I wanted, I couldn’t see that I hadn’t attracted what I deserved. In not being true to myself, and honoring my own desires, wants, and needs, I found myself in a dysfunctional relationship. I had attracted exactly what I was trying to avoid.

It took a medical slap in the face for me to understand that until I learned to respect myself, no one was going to do that job for me.

It wasn’t until I started to be open and honest with what I really wanted, and doing the hard work of speaking my truth, that I then attracted someone into my life that had the qualities I deserved and desired.

So if there’s one message I’d like to share, it’s: Own what you believe and don’t be shy about speaking it. That’s the first step toward the love you deserve.

Melissa Terrels is a yoga instructor living in Southern NJ. She spends her time taking care of her daughter and learning about life. Her passions are introducing people to the benefits of yoga, art, friendship and nature.