Tiny Wisdom: On What We Imagine
By Lori Deschene 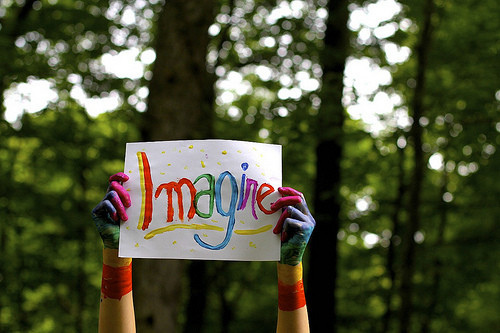 “Logic will get you from A to B. Imagination will take you everywhere.” ~Albert Einstein

For the past four weeks, I’ve been spending my off days at Disneyland. My boyfriend said that Walt Disney created something brilliant primarily because it gives the illusion of diverse experiences contained under one umbrella brand.

In addition to exploring a variety of fantasy lands, a Disney guest can also experience the western frontier, New Orleans Square, Hollywood, and the remote jungles of Africa and Asia. He can ride a steam-powered locomotive, a monorail, a double-decker bus, and a horse-drawn streetcar.

One day and $94 later, he feels he’s seen and experienced more life than he’d likely fit in the average year. My boyfriend said he’d read in a research study that people receive the same psychological benefits by visiting Disneyland as they do when they have the actual experiences. Yet it was just an illusion.

What interests me about this is the extent to which we’re willing to imagine—to pretend—instead of actually doing.

When we sit around watching Friends instead of going out to meet new people. Or see a romantic comedy instead of doing something romantic for someone we love. Or watch Eat Pray Love and feel like we’ve experienced something spiritual and transcendent.

Sigmund Freud said, “Illusions commend themselves to us because they save us pain and allow us to enjoy pleasure instead.” The same can be said for imagination if we never translate what we imagine into what we do.

How can you give your imagination legs today?