Tiny Wisdom: What We Choose to See
By Lori Deschene

“It’s not what you look at that matters, it’s what you see.” -Henry David Thoreau

Yesterday while driving home from the dentist, I listened to this CD my boyfriend made with theme songs from various movies.

While I generally would rather do a low crawl down a muddy sidewalk than sit in LA traffic, I couldn’t have been more blissful lost in the tunes of my favorite films.

I noticed something interesting during this peaceful drive.

While listening to The Pirates of the Caribbean theme song, I recognized all kinds of exciting things happening around me. This kid did a Back to the Future-style skateboard jump while crossing the street at the walk signal; and several yards away in the park, I saw a group of girls doing back flips. I realize these events aren’t as riveting as Johnny Depp escaping death, but in that moment, I felt their energy.

After the light turned green, I switched to the Forrest Gump theme song, and noticed numerous poignant moments in the moving picture outside my window—a little boy running and jumping into his mother’s arms, and a woman bending down to help a homeless man on the sidewalk. With the simple change of a song, I felt transported to a Lifetime special.

Suddenly I wondered: How often did the soundtrack in my head dictate what I chose to see?

At any given moment, there’s a lot of life happening around us. It’s far too much to take in all at once, which means we need to consciously choose where we place our attention—and how we perceive the things that we allow to hold our focus.

This is usually influenced by our mental state. When we’re angry, we’re more apt to find people annoying. When we’re hurt, people can seem insensitive. And when we’re happy, all of a sudden, the world seems like a kind and beautiful place.

Essentially, we narrate the world based on our moods, just like those pithy voiceovers, usually delivered by Morgan Freeman.

But there is another way to go about it—we can instead create our moods by consciously choosing to see the good around us. It’s always there. It’s just a matter of whether or not we’re willing to look and see. 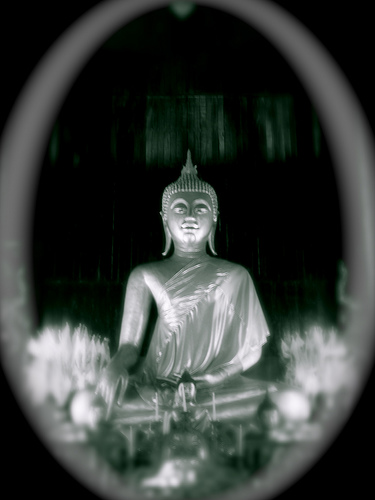 Photo by The Wandering Angel