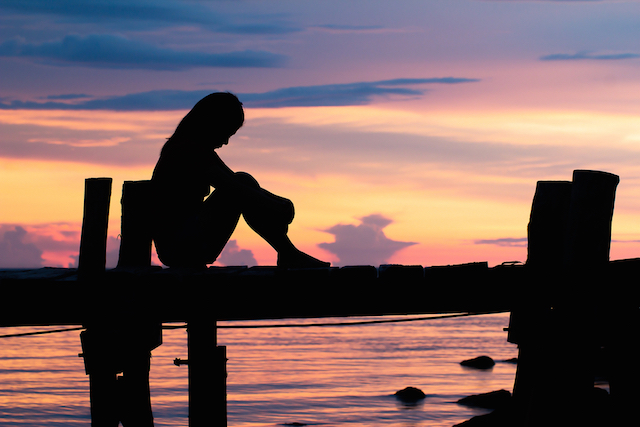 “At some point you have to realize that some people can stay in your heart, but not in your life.” ~Unknown

I was filled with excitement and nerves as I stood waiting to meet him for the first time in Paddington station.

It was one of the wettest days I’d seen in London, and the rain dripped steadily from the peaked hood of my blue rain jacket. Zipped up to my chin and the hood pulled tight over my head, only my eyes peered out, searching for him amongst the crowds and falling rain.

Months later, he told me that he’d fallen in love with me the moment he saw me, those big eyes staring out at him from beneath my hood.

We’d been introduced on Facebook via a mutual friend after I’d commented on how cute he was. He lived in California. I lived in London. He’d quit his job to travel for a year and was passing through the city. He asked if I wanted to meet.

But in the same moment that he fell in love with me at the station, my excitement faded away. What I’d hoped to feel when we finally met just wasn’t there.

Over the next few months, from wherever he traveled, he pursued me with a persistence I’d never known.

At first, I was annoyed. I wished he’d leave me be.

But as the weeks and months went by, things started to change. He wanted to know everything about me. He was interested. Interested in a way no one else had been before. He took time to get to know me. And I started to get to know him too.

I realized that I’d judged him too soon.

When he returned to California, we spent the next few months talking online almost every day. With every question he asked, I started to love him a little bit more.

Eventually, we talked about meeting again, this time in California, to see where this all might lead.

And so three months ago I boarded a plane at London Heathrow to meet this man who I’d begun to love.

We spent the next three months on one long adventure. It was filled with road trips, hiking, forest trails, gentle kisses, holding hands, the wind in our hair, the sun on our cheeks and the smell of California all around us.

But it was perfect.

And yet when those three months came to a close, we both acknowledged the unhappy reality that we were two people traveling in two very different life directions. We both felt that continuing our journey together would mean neither of us would ever quite be truly content.

And so my grieving began. A sort of grieving I’ve not experienced before. Because here was a man I loved. And yet I also knew that we weren’t meant to be.

The last few weeks have been filled with a great deal of sadness, confusion, and questioning, as well as gratitude and happiness for the time we spent together.

I don’t think there’s a person amongst us who has escaped heartbreak in this thing we call life. And so amongst all this, I wanted to share a few thoughts on love and life. It’s helped me to write this down. I hope it might help you too.

In our final week together, we watched a film called Miracle, the true story of Herb Brooks (Russell), the player-turned-coach who led the 1980 U.S. Olympic hockey team to victory over the seemingly invincible Russian squad.

There’s a moment in the film when Herb turns to his wife and says:

And that is the important thing.

But then where would we be?

And while these endings bring pain, I never want to live my life not playing my heart out. I don’t think anyone should live that way. Not in business. Not in love. Not in life.

So keep opening up.

Keep playing your heart out.

Right now, one of the things I’m really having to fight is the stories my mind is trying to create. Stories like:

Those stories get locked in and then they impact the way we behave in every similar situation in the future.

So I’m reminding myself every second of every day that this love story not working out doesn’t mean there’s something wrong with me.

So I want to remind you too. There’s nothing wrong with you. You’re lovable. You’re loved.

Permanence is an illusion.

I spent some time reflecting on why I feel so sad. To be sure, this is grief, of a sort, and my sadness is legitimate and welcome.

But as I look at what’s behind my sadness, I see stories of clinging.

Clinging to a person who was never mine to begin with.

Clinging to stories of the future, which will now never come to be.

I remind myself, now, of the law of impermanence.

That all things come and go.

That all things, both pleasure and pain, pass.

That there is nothing in this world that will remain as it is in this moment.

And I remind myself, too, that just because something no longer is, doesn’t mean it never was.

Look for the good things.

It’s easy for me to seek out only the bad in all of this. It’s easy to focus on the sadness and the pain and the reasons why it didn’t work out.

But I once read a story about a mother who told her son, every day before he went to school, “Look for the good things.”

And now, even though his mother is gone, he remembers, always, to look for the good things.

I loved this story and it’s what I’m trying to do now.

I think it’s important to acknowledge pain and sadness. They need their time and space. But amongst all that sadness, don’t forget to look for the good things too. They’re there. I promise.