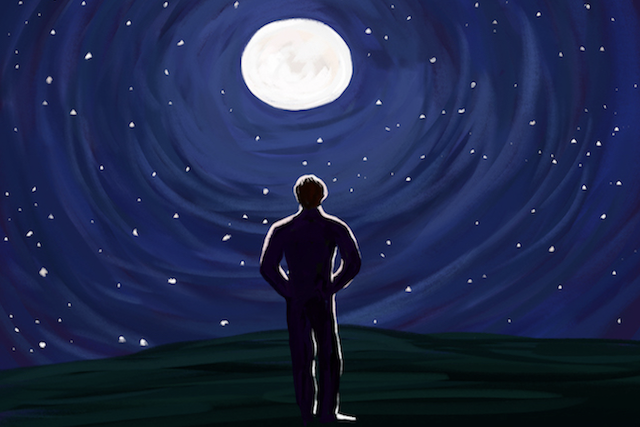 “Life is for the living. Death is for the dead. Let life be like music. And death a note unsaid.” ~Langston Hughes

Nine years ago, I was sitting mindlessly in my office cubicle in Omaha, Nebraska, when the receptionist called to inform me that my dad was in the lobby.

I walked out to greet him: He was happy, smiling, and donning one of his favorite double-breasted suits. He was there because he needed my signature on some tax preparation forms before he handed them over to his accountant. My dad always took care of things like that.

It was a Friday in February, late morning. We briefly discussed getting lunch but ultimately decided not to in the interest of time. We would see each other over the weekend, anyway. After all, we were planning a trip.

A week prior, my dad told me he wanted to take me to Vegas for my thirtieth birthday. I’d never been to Vegas. There were things to discuss, hotel rooms to book, concert tickets to buy.

I signed the tax forms, thanked my dad, and walked back to my cubicle. I don’t remember anything else about this day. It was, in fact, just like any other day. It was ordinary. Humdrum, you might say.

But the next day…

The next day is forever seared into the pathways of my hippocampus, every detail a tattoo on my mind’s eye.

Because the next day…

That’s the day my dad died.

I remember the morning phone call I got from my sister.

I remember running to my car, half a block up Howard Street, and then another block down 12th. I remember the whipping wind and the stinging cold. I remember the saplings lining the streets of downtown, their branches brittle and bare, scratching the ether like an old lady’s fingers.

I remember the seventeen-minute drive to the hospital.

I remember the hospital, the stairs, the front desk, the waiting room, the faces, the hugs, the tears, the complete and utter shock.

I remember that my mom wasn’t there.

Three times we called. Where is she? Why isn’t she answering? Who’s going to tell her?

It seems like our lives are defined by days, even moments, like these—the most joyous or the most unbearably tragic.

I miss my dad.

I miss his ridiculously big heart, which we were told was the thing that killed him.

I miss the lingering scent of his cologne, a sort of woodsy, leathery blend that comes in a classic green bottle. I miss his laugh, which could range from a barely discernible chuckle to a jolly, high-pitched guffaw. I miss seeing him in my clothes—the shirts and shoes and jeans that I wanted to throw away because they were clearly going out of style.

I miss the things I never thought I’d miss, the quirks and ticks and peccadillos that drove me crazy—like the way he’d crunch his ice cubes or noisily suck on a piece of hard candy in an otherwise quiet movie theater.

I wonder if I chose to write this today instead of tomorrow because writing it tomorrow could prove too difficult. Or if I chose to write this after nine years instead of ten years because ten years is one of those nice, round numbers we use for milestone birthdays and anniversaries and other such occasions we’re supposed to celebrate. Or maybe because ten years is a whole decade and a whole goddamn decade without my dad just seems too strange to fathom.

When I think of the last time I spoke with my dad, I can’t help but also think of that Benjamin Franklin quote—the one about how nothing is certain except death and taxes.

But only one of those things comes with any sort of predictability.

Studies have shown that our brains are wired to prevent us from thinking about our own mortality. Our brains shield us from the existential thought of death and view it as something that happens to others but not ourselves.

So, most of us, perhaps because of our biological wiring, rarely even think about the unfortunate truth that we’re going to die, and we have no idea how or when.

On the other hand, some of our greatest ancient philosophers actually practiced reflecting on the impermanence of life—otherwise known as Memento Mori, which literally translates to Remember you must die.

“You could leave life right now,” wrote Marcus Aurelius in his Meditations. “Let that determine what you do and say and think.”

Personally, I don’t think about my own demise a whole hell of a lot.

But there’s a reason I decided to pack up my things and move to a new city six years ago.

There’s a reason I decided to make a career pivot five years ago.

There’s a reason I decided to quit my day job at almost forty years old and start working for myself two years ago.

Because nine years ago, death did a number on me. I had one of those unbearably tragic days that seems to define our lives.

And now, before I go to bed each night, I ask myself:

Was I a decent person today?

Did I challenge myself today?

Did I have any fun today?

What am I grateful for today?

If I were on my deathbed, would I have regrets?

Asking myself these things helps me live a more fulfilling life—the kind of life that I want to live. And I’m proud of what I’m doing here, right now. I think—at least I hope—my dad would be too.

I still haven’t been to Vegas, though.

Tony Endelman is an author, blogger, humorist, certified transformational life coach, and certified happiness trainer. He currently lives in New Orleans. Catch up with Tony on his website.

4 Questions to Turn Your Anger Around and Forgive