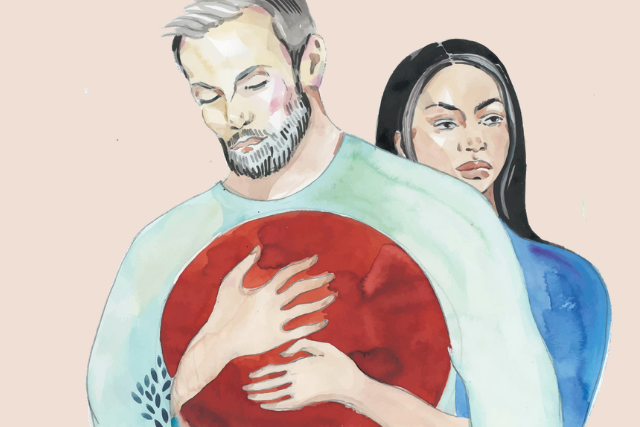 “Don’t let people pull you into their storm. Pull them into your peace.” ~Kimberly Jones

I was finally in a solid place when I met my now-ex-boyfriend earlier this year. I had created some healthy habits for myself and was fully recovered from the eating disorder that had ruled my life for eight years prior.

Things had turned around completely for me, as now I was getting my first novel published and had a flourishing greeting card line.

When I first met my ex, who I’ll call Alex, it was love at first sight. I was completely infatuated with this talented individual from Seattle who made beautiful paintings and music. The art he made truly resonated with my soul, and he could say the same thing about my writing.

Needless to say, it felt like a match made in heaven. So after our courtship, I was more than willing to move up to Seattle from Los Angeles and live with him.

I was heartbroken when four months into living together, he revealed he was addicted to meth. He admitted that he’d been addicted the past two and half years and had been using every day up to five times.

I was blindsided, stunned, and overwhelmed with a twister of emotions. How could I have not known? I scolded myself. He was always hyper and created much more art in such a short time frame than I’d ever seen any other human do.

Well, they say hindsight is 20/20. I didn’t know he was on meth because I didn’t know what signs to look for, and I’d personally never tried meth myself.

When Alex admitted this to me, I cried in fear, certain that our lives would change for the worst. I knew this betrayal of trust would be difficult for me to recover from, as I became vigilant at his capacity for dishonesty.

I also worried that he wouldn’t love me the same after he quit meth and that the only reason that he’d fallen in love with me so easily was because he was high! But I had already invested so much in this relationship, moving states and all. I wasn’t ready to just throw what we had away.

It was ironic because I remembered feeling so happy that I had met him when I was in a “good place” in my life, but all of that seemed so distant now. We can all morph into the worst versions of ourselves when we become clenched in fear.

When Alex was in the process of attempting to quit, it became difficult to detach myself from the turmoil he’d ooze every evening.

Like clockwork, every night around nine, he’d get this vacant look in his eyes and begin to pace around. It was like a dark cloud had come over him and I wasn’t even there anymore. I began to feel that I wasn’t enough for him.

The love I had for him and the idea of us kept me in that relationship for several months after the revelation about his addiction, and I eventually realized why Alex had admitted his meth use to me. He thought he could rely on me to be the “strong one” in the relationship, since I was sober, but in actuality, I was just as fragile as he was.

And I felt too awkward setting boundaries for this recovering addict, afraid he’d feel infantilized or patronized every time I questioned him about his drug use or nagged him to stop. I felt like I lost myself again, when just months before I was so certain about my identity.

Alex continued to relapse for the next six months, never staying sober for more than a few weeks at a time, and I began to feel extremely helpless.

Those fits of restlessness and angst that overwhelmed him every night felt too close to home, and just like him, I had yet to master how to tolerate those uncomfortable feelings.

Some evenings I found strength in myself and was able to tolerate the uncomfortable emotions he was experiencing without reacting. Other nights, we’d get into fights when he’d want to go on a “drive” (buy meth).

This lovely relationship we once had devolved to one of raw, dark emotions that neither of us really knew how to get a grip on. And worst, we both relied on the other person to get it together!

Eventually, despite the fact that I loved this man with all my heart, I knew I had to set myself free from this relationship. I had enough insight to know that even though I’d recovered from my eating disorder, I still wasn’t strong enough to resist getting pulled into his troubled psyche. I needed to pull back to create my own peace again, because I sure as hell wasn’t going to get it from this guy.

It’s been about a couple of months since we’ve been officially broken up and I’ve moved back to Los Angeles to live with my family.

Many days I have guilt and regrets for leaving and not being able to help him out of his addiction. It was like all of the meaningful talks we had, trips to the psychiatrist, and meditative walks in nature were for nothing. In all honesty, I felt pretty useless to his recovery.

1. Encourage him to get help

When he first revealed he was addicted to meth, I could have been honest and told him I had no clue what to do and somehow convey the depths of helplessness I felt. Then I would have pointed him to professional support sooner and wouldn’t have taken his relapses so personally, as if I was at fault because I was solely responsible for helping him.

2. Get support for myself

I should have attended Al-Anon meetings and attempted to have my own support group in Seattle instead of letting anxiety take such a strong hold over me and then isolating myself from meeting new people.  Supporting an addict can be draining, and no one should have to carry that alone.

3. Take good care of myself

Relationships often become unbalanced when one person is an addict, but both people need time and space to focus on themselves and their needs.

I wish I had clearer boundaries for myself going in so that I didn’t stay as long as I did and watch the love we had sour. For instance, it would have been more helpful if I told myself that if I saw him using while we were together, I would have distanced myself from him.

I could have communicated this to him, as well, by saying something like “I’m all for your recovery and supporting you through your journey. But using drugs while being together is unacceptable to me, and if I find out you are using, I will have to distance myself from you for my sake.”

Setting boundaries earlier on may have prevented my unintentional enabling, which created behaviors in him that I later resented.

5. Prioritize my own happiness

I shouldn’t have let guilt keep me in a relationship that was making me unhappy. Like many others, I felt pretty paralyzed by fear of hurting the other person. I wished I had more strength to leave this person I was in love with because he was self destructing and refusing to really help himself.

As one can surmise, these are all lessons and wisdom you gain after an experience like this, not before, but perhaps they will be helpful to someone who’s right now standing where I once stood.

Now I am taking time to find peace in myself every day so that I am better equipped to handle another person’s baggage (because we all have it) the next time I attempt to date.