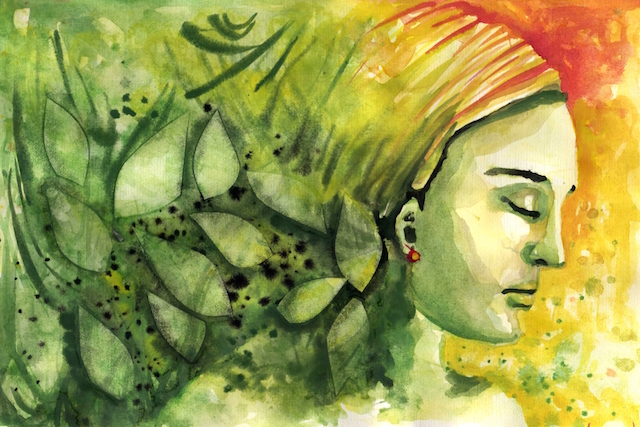 “The reason we struggle with insecurity is because we compare our behind-the-scenes with everyone else’s highlight reel.” ~Steve Furtick

I remember one day when I was around six years old, my older brother came home from school with one of those star-shaped highlighters that had a different color on each point. I laid my eyes on it and in that moment I wanted nothing more than I wanted that highlighter.

It didn’t matter that as a six year old, I had less use for it than paper shoes in rainy weather; I just simply had to have it.

Being the loudmouth child that I was, with a scream my mum only describes as “hell-breaking loose,” I fought (cried) tooth and nail for that highlighter until my father made my brother give it to me.

I scribbled an obscure masterpiece of color for a solid five minutes—until my pupils dilated at the new pencil case my brother had pulled out of his school-bag. It’s safe to say my brother sure didn’t like my company for a while. Anything he had, I wanted.

This wasn’t just an innocent childish trait. It seemed to follow me as I grew a little older too. I found myself wanting many things other people had.

It didn’t have to be tangible. In fact, most of the time it was a character trait, a skill, or even academic ability. I always wanted something somebody else had.

The problem was that it was no longer a case of just wanting the highlighter; I was putting myself down and getting frustrated at why I wasn’t given one, or why I wasn’t capable enough to get my own.

The self-doubt questions start seeping in: Am I good enough? Why can’t I do this or have that? Am I ever going to achieve the things others seem to so easily? Why is it so hard for me to be happy and easy for everybody else?

The thing with comparing ourselves to others is that it’s something every one of us does, or at least has done in the past.

Remember coming home with a 95 percent on an exam? One of the first things our parents would ask is (second to “what happened to the other 5 percent?”): “How did everybody else in your class do on the test?”

It seemed like it didn’t matter that we had gotten an A+, not if everybody else did too.

It is always a comparison. In fact, education boards compare schools, teachers compare students, and employers compare interviewees. It’s just how the world works. It’s inevitable that we will learn to compare.

At an individual level, we might attend parties or ten-year high school reunions and analyze in fine detail what successes everybody has achieved in their lives, and our drive home consists of brooding, trying to pinpoint where it all went wrong for us.

If that wasn’t bad enough, enter: Facebook. Correction, social media as a whole has taken the lead in creating an online universal medium for comparisons all day every day!

Now we know instantly when our friends are lying on a sandy white beach while we’re slaving away at a nine to five, which we have probably loathed for eight years.

We see our friends getting married, and we can’t help but think about why we haven’t settled down yet. Our Facebook News Feed is filled with photos of couples with their first new-born, and we ask ourselves if we’ve missed our chance at having a family.

We need to remember that on the outside, things may seem a certain way, but it’s almost always inaccurate. And that leaves our comparisons with very little basis.

We’ve heard the phrase “Everyone’s fighting their own battle.” I had a friend once tell me that, on the outside, I looked like I lived a princess lifestyle. Princess!

Apparently, I always had a smile on my face. I joked around, and seemed as though I hadn’t a single worry in the world. After she got to know more about me, she said she would never have guessed I had the problems I was actually dealing with at the time.

Personally, I don’t recall having a particular incident happen to me that prompted a change. Perhaps it was just my gradual disinterest in other people’s lives and a heightened interest to focus on my own.

But I realized there was zero benefit from comparing myself to others. Emotionally, it would only bring me down, and mentally, it immobilized me. No progression occurs at a standstill like that.

Whether it’s something innate that we develop as kids, or something we’ve learned from the nature of our society today, we compare. And although logically we know comparisons are no good for us, we still can’t help doing it.

So how do we actually stop?

1. Appreciate what you do have.

I realized it had never crossed my mind that perhaps someone out there could be looking at me, wishing for something that I had. When you’re lost in a world of comparisons, your focus is always outward, analyzing others. You forget that you already have a million and one things to be forever grateful for.

As our man Einstein says, “Everybody is a genius. But if you judge a fish by its ability to climb a tree, it will live its whole life believing that it is stupid.”

We’re all different, we see things differently, we’ve all had different experiences and come from different backgrounds. So comparing ourselves to others is synonymous to comparing a fish to a monkey.

3. Things aren’t always what they seem.

For some odd reason, we tend to make up our own judgments on people just on the way they look on the outside. You may look at two people working at the same firm, judge them both, and wish to have their position, but what you don’t know is while one may have got the job through his father’s connections, the other had worked twenty years at the bottom of the gutter to get where he is now.

4. If you must compare, compare to yourself.

Some people use comparisons and convert it into motivation. And for those who can do that, go for it. It’s definitely a positive spin; perhaps seeing someone’s success drives you to do the same.

I often use this one, but I also believe that the best person to compare yourself to is you. Compare the present you to the past you. It’s a much fairer scale and a sure way to progression and peace of mind.

Leading on from the last tip, change the things you want to and when you have, compare back to yourself and see how much you changed for the better. And with the things you can’t change, accept that it was how you are supposed to be—own it, live it, love it.

If you want to take one thing from this post, take my favorite: The only person you should be comparing yourself to is the person you were yesterday.

Sara is a writer, blogger and aspiring author from London, England. She's also a dental student training for her licence to drill. She can be found at saraidavies.wordpress.com and on Twitter @saradavies_

5 Tips to Stop Comparing Yourself to Other People

Stop Comparing Yourself to Others: An Alternative to Competing with People