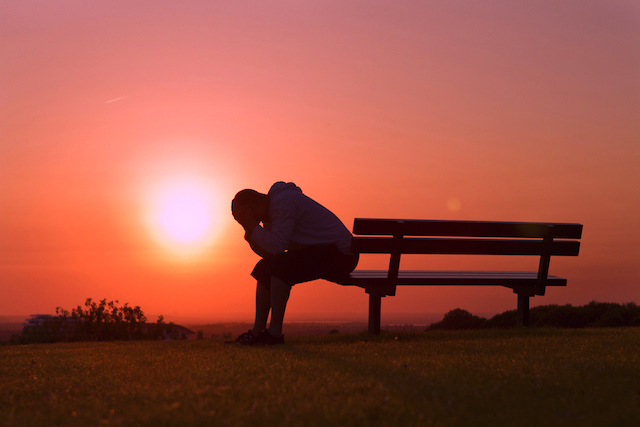 I’m a worrier by nature, and I come by it honestly.

My mother was afraid to cross bridges and ride in elevators, boats, and airplanes. Her mother died of cancer at the age of forty, and my mother spent many years—including those of my childhood—thinking every sniffle, fever, or headache might be the start of something fatal.

Although I didn’t realize it at the time, growing up with a steady dose of anxiety, like an invisible intravenous drip, had its effect on my developing mind.

I was an introverted, timid child. Afraid of the boys who threw snowballs, afraid of steep ski trails, afraid of not getting A’s in every subject, all the time. A lot of my anxiety got channeled into perfectionism, and—just like my mother—trying to control pretty much everything.

The gift in my anxiety was a distinct drive to find peace. That quest led me to meditation at the tender age of nineteen.

That was more than forty years ago. I was young and naïve and really had no idea what I was doing (the belief that I could banish worry forever being just one indication of my naiveté). But I persisted—and when I lost the thread of practice, I always eventually came back to it.

Here’s one thing I’ve learned in forty-some years of meditation and awareness practice: There is a great deal that I’m not aware of. Still.

That could be discouraging, and sometimes it is. But what keeps me on this path, what keeps me meditating and working to bring the light of mindful attention to the dark places in my mind and life, are the new awarenesses, the small victories I feel in moments when something that was unseen is all at once seen.

There is a thrill in that, not perhaps like the thrill of speeding down a black diamond trail or any of those other physical challenges I’ve always been afraid of, but a thrill just the same.

One day, not too long ago, I was driving to a train station to leave my car in a long-term lot while I visited New York for a few days. I had never been to this lot and as I drove, I was feeling the pressure of needing to find the lot, find a spot, and not miss the train.

That feeling of pressure isn’t unusual when I have a deadline such as a train to catch. But this time, for some reason, I became more acutely aware of a subtle layer of physical and emotional tension.

Just as I often do on the meditation cushion, I began to bring the feeling of tension more fully into awareness and to investigate it as I was driving. Here’s what I saw:

1. I was facing an unknown (inconsequential as it was), which triggered anxiety because the unknown is impossible to control.

2. My feelings were telling me a lie—that is, that this unknown situation had life-or-death consequences.

3. How I was relating to the unknown of not being sure about where to park and how long it would take, this is how I relate to all unknowns in my life, large and small. That is, I approach the unknown with an underlying assumption that was completely unconscious until that moment: “It won’t work out.”

Because I had become aware of it, I was able to question the assumption. I remembered Pema Chodron’s description of a traditional Tibetan Buddhist teaching, from Start Where You Are: A Guide to Compassionate Living: “train in the three difficulties.”*

The first “difficulty” is to see your unhelpful patterns of thought and behavior. The second is to “do something different.” The third is to continue doing that different thing.

So, I asked myself, “What if I tried something different, and assumed it most likely would work out?” (That is, I would find the lot, be able to find a parking spot, and get to the train on time.)

I tried to coax my brain toward this idea, and to resist the considerable energy drawing it back to the habitual, well-worn track of  “It won’t work out.”

It felt strange, driving toward the station with the idea that finding parking and getting to the train was workable. I mean “strange” the way crossing your legs the opposite way from how you usually do feels strange. Not bad, really, but unfamiliar, foreign.

But not too long after it felt strange, it felt incredibly liberating. Just as assuming “It won’t work out” is a pretty sure bet to breed anxiety, approaching an unknown with the assumption that it’s going to be workable is likely to induce at least some degree of calm and equanimity.

And it did. My shoulders relaxed, my breathing deepened, and I felt a kind of mental brightening, as if a foreboding storm cloud had unexpectedly lifted.

I’d like to say that was the moment when I cast aside the worn-out assumption that “It won’t work out” and replaced it—forevermore—with “It’s all workable.” Well, suffice it to say, I’m still working on the third difficulty: “Continue in that new way.”

But that’s okay with me now, in a way it wouldn’t have been four decades ago. Instead of feeling impatient to get rid of that worry-driven assumption, I feel grateful that I became aware of it.

And to me, that kind of awareness, arising seemingly spontaneously, is the fruit of meditation and whatever other ways we work to wake up. However imperfectly we make that effort, it does make a difference over time.

Contrary to the incessant messages from our turbo-charged culture, here’s another piece of wisdom I’ve gleaned in forty-some years of meditating and sixty-some years of life: Most change happens bit by bit, one small “aha” at a time, with lots of practice in between.

And there’s joy to be had—in each of those small awakenings, and in the winding path we walk toward the unknown, illumined by the light of one humble, thrilling realization after another.

(By the way–no surprise—I did find the lot and a parking space, and got to the train with plenty of time. It did work out.)

Abby is a psychotherapist, speaker and author of Finding the Deep River Within: A Woman’s Guide to Recovering Balance & Meaning in Everyday Life. She teaches courses and workshops on how to live a soulful life in a speed-obsessed world. Find Abby at: http://deepriverwithin.com  & on Facebook, Twitter, Linked In.