Before You Send That Message to Your Ex, Consider This
By Hayley Brooks 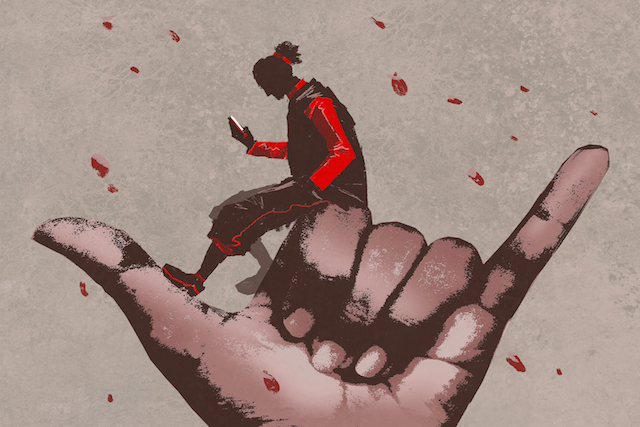 “If the hurt comes so will the happiness. Be patient.” ~Rupi Kaur

What if I said instead of messaging our ex, we had a different choice, a choice that will be even more fulfilling than acting on the urge to share whatever we’re feeling right now?

It’s been over a year since I last spoke with my ex. While I’ve thought about him and missed him, I’ve known that getting in contact wasn’t the right thing, and so I haven’t taken any action to reconnect.

For the past few weeks, however, my thoughts have been seeping in, focusing on the good times, the fun times, and how, when we were at our best, he made me feel like the most important person in the world.

What’s been different this time is that these romanticized thoughts have coincided with a period in my life when I’ve been having a difficult time, and with that, my willpower to abstain from reaching out has been weaker.

Recently I felt a knot in my stomach, an overwhelming urge, like I couldn’t get through another moment without speaking with him. My chest tight, heart thumping, unable to relax, tears flooding, a messy anxious feeling that needs him.

In my moment of weakness I took to notes on my phone to write everything I wanted to say. I imagined how he’d be there for me and give me the love and support I’ve been craving. Tears flowed as I typed, the anxious pit in my stomach now at bursting point waiting for me to send the message to become relaxed once more.

But what if our need for connection is leading us to the wrong places? What if we are seeking the familiar, but it’s actually chaos, dysfunction, and drama—not something positive or healthy?

Within our brains are neurotransmitters called dopamine, which act as messengers communicating reward, motivation, and body regulation. What’s interesting is that dopamine is not only released from pleasurable experiences—say for example love, hugs, and kisses—but also when we’re trying to get out of a difficult experience. So, that feel-good chemical is not only released during the good times, but can also be released during the bad.

Growing up with alcoholism in my family, violent outbursts and drama were a regular occurrence. It’s only in hindsight that I’ve realized I’ve been drawn to relationships full of extreme highs and lows, the exact replicas of chaotic times of my past. I’m not a scientist, but I’d guess that I’ve been reaping the benefits of a whole lot of dopamine during those roller coaster relationships, like my mind is addicted to drama!

As I sat thinking about the text message I wanted to send, my mind raced with anxiety and questions. What would his response be? Would I even receive one at all? Would he say loving, supportive words like during our good times? Or would he be annoyed that I’d made contact? Ruminating, ruminating, ruminating, the what if’s, is this the right thing?

In one moment of clarity (and luckily before hitting send), with the guidance of my therapist, I took a step back from the situation to see what was really going on. My brain, now hardwired for drama, was seeking a hit, the perfect distraction from feeling the sadness of what’s currently going on in my life. Dealing with the anxiety and drama of making contact with my ex felt a lot easier than just sitting with my emotions.

Being in this state, I gave myself permission; I could still send the message, but on one condition: I had to wait as long as I could, at least overnight and if possible a few days. Then, if I still wanted to send it that would be completely okay because I’d be doing it out of choice rather than impulse.

Using the time wisely, I spoke to someone trusted, who I could rely upon. They didn’t offer advice; they just sat and listened to everything I had to say about what I was going through.

Slowly, the anxiety dissipated and that bursting pit in my stomach subsided. And I cried. That big ball of emotion I’d been stuffing inside was finally released. Even more beneficial, I didn’t have any of the worry about how he would react or be with me, which allowed me to concentrate on fully feeling.

The next morning, filled with clarity, I chose not to press send. While I had the perfect vision of what I had hoped to get from contact with my ex, I knew I couldn’t control his response.

I also realized that making contact would have only been a short term ‘fix’, and when the initial feeling of anticipation subsided, I would be left feeling the exact amount of pain that had led me there in the first place.

You might not be addicted to drama as I was, but there’s a good chance that your desire to text your ex is really an attempt to stop feeling whatever uncomfortable emotions you might be feeling—sadness, disappointment, or maybe fear of what’s down the road.

Texting your ex might seem to help temporarily, but those feelings will still be there after you hit send. And you may even feel worse if they don’t respond, or don’t respond how you hoped they would.

There are no right or wrong answers when it comes to what we should do. But we need to give ourselves the opportunity to act out of choice rather than impulse, or as I nearly did, due to a need for to drama to distract me.

In the time we take to make our decision, we can do what we need to make ourselves feel nurtured, and if necessary reach out to a trusted person who we know will 100 percent have our backs. After that, it might be a lot easier to make the healthier choice.

The Gift of Anxiety: 7 Ways to Get the Message and Find Peace