How to Boost Your Self-Worth: 7 Tips to Feel Better About Yourself
By Corinne Dobbas 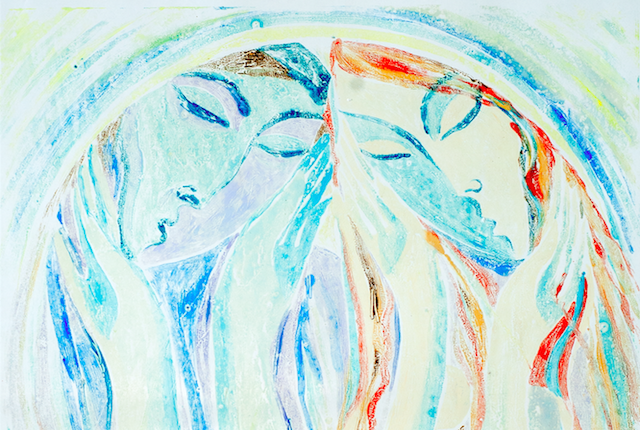 “The more we see ourselves as a vibrant, successful, inspiring person who boldly declares and manifests her vision, the more we become just that.” ~Kristi Bowman

I was kind of a chunky kid growing up.

In my own little world of trolls and playwriting, I didn’t notice the chunk. I genuinely liked me. But when I entered the “real world” of opinions, people, and comparison, I began to realize or rather feel that perhaps my body wasn’t good enough.

This thought was like a seed that was then planted in my brain. And every time I thought about it, I watered it. Soon enough, that seed sprouted and feelings of not being enough were just a part of who I was.

I was really good at disguising those thoughts, though. Most in my circle had no idea of how I really felt.

To be brutally honest, I didn’t even know how I really felt until an event that happened (years later) shined so much light on my deep-rooted feelings of not being enough that I could no longer not acknowledge my feelings. At this point, I fully acknowledged that I had some serious work to do.

The beginning of the event (you’ll see why I say beginning shortly) was with a boy. I was in my twenties. We were newly dating. We had just come back to his place after a nice dinner. We kissed. We decided to change and put on some comfy clothes to watch a movie.

While I was changing, a funny, unpleased look washed over his face, and he told me that he was surprised my stomach wasn’t really that flat. That I had somewhat of a “muffin top.”

I stood there, pulling my shirt over my head, stunned. I didn’t know what to say, so I didn’t say anything.

After the movie, I left, covered in shame. I felt confused, embarrassed, and alone. Despite all of that, I continued to still see him until he inevitably dumped me a few weeks later.

The real event was my reflection after this relationship ended, when I realized I felt so poorly about myself that I continued to stay with someone who made me feel deep shame. More importantly, I realized that he was just echoing and reflecting back my own feelings of not being good enough.

It was in this moment that I decided I was, in fact, enough, and that things were going to change.

Here’s what I did to begin to boost my self-worth and how you can begin to recognize your own worth too.

1. Pretend you are your own best friend.

Simply start to notice what you’re saying to yourself. You may be taken aback by how often you’re saying unkind things to yourself (I know I was), but know that it’s totally normal and part of the process. Allow yourself to observe the thoughts that come up and not judge yourself for having them.

When you notice that you’re in this unkind space, ask yourself, “If this were a friend coming to me with these thoughts, my thoughts, what would I say to them?”

This question would always wake me up and radically change my self-talk. I could see how mean I was being to myself. I wouldn’t speak to any other human being like I spoke to myself, let alone a friend. You may find this is the same for you.

If this is difficult for you, it may be because you don’t think you deserve this level of kindness. First of all, you do. Second of all, you can combat this by choosing to focus on one thing you appreciate about yourself that day. Perhaps you appreciate that you decided to go on a walk even though you didn’t want to, or you were kind to your coworker, even though she was being unkind.

Reflecting and recalling things you appreciate about yourself isn’t always easy, but the more you practice it, the easier it becomes. And it’s in this space you’ll begin to see you deserve to be spoken to kindly, just like you would speak to a friend.

2. Surround yourself with people who bring you up.

I was notorious for saying yes when I really wanted to say no. Again, it all boiled down to not valuing my wants, my needs, or myself. The first time I said no (with grace), I was petrified. I was worried the other person would hate me.

Funny thing is, they didn’t hate me. They began to respect me more. And the more and more I declined outings, events, dates, work, and time with people who brought me down, the more I made room for the things in my life that made me shine, feel happy, and feel whole.

By feeling this way, I began to really fall in love with myself and appreciate the power I had to make myself feel grounded. I began to feel enough.

And it was during this time that I joined a local yoga studio, signed up for meditation classes, and started regularly hiking. Through these activities, not only did I find self-worth, and myself, but I also began to grow a beautiful support network of likeminded individuals who would eventually become friends.

You can do this too. Find and/or make time for activities that bring you joy, and know that a simple hello and a smile can go a long way.

3. Ask close friends or family members what they appreciate about you.

Sometimes (or a lot of the time) a kind word from someone we love and trust can go a long way. Their perspective can also help shed some light on qualities about ourselves we previously dismissed.

And when you have these words in writing, you can pull then out and reread them whenever you feel down.

The email I sent, and that you can send too, went something like this: “As one of the key people in my soul circle, would you mind telling me what you appreciate about me? I’d be so appreciative!”

Try it. Save their words. And reread them when you need them.

4. Get curious about why you’re triggered.

We get emotionally triggered for all sorts of things—words, actions, decisions, comments, and the list could go on.

When I got serious about feeling my worth, instead of getting angry with others, situations, or myself when I became emotionally triggered, I got curious and began asking myself what still needed to be healed. By doing this, I was able to really heal my wounds and understand myself better, so the next decision, action, person, or words I chose would lend to better, more loving choices.

For example, comments about how much or how little I would eat triggered me because I thought someone was judging my body.

This observation made me realize I had more healing to do around accepting my body and being grateful for it. So I began to write what I appreciated about my body every day in a journal. Slowly, over time, I came to fully love my body—cellulite, “muffin top,” and all.

You can do this too. The first step is simply becoming aware of when you’re emotionally triggered, leaning into the “why” behind it all, and seeing what still needs to be healed.

5. Focus on kindness and helping others.

Choosing to switch my focus from “What’s wrong with me?” to “How can I give back?” was immensely powerful.

What made me see and feel my worth was helping others—giving a compliment, holding open a door, calling my grandma, starting a random conversation with the woman bagging my groceries, helping an elderly gentleman who had fallen get back up, extending an ear, a hug, and a tissue for a girlfriend after her long hard day.

By giving back, even in tiny ways, I saw how much of an impact I had. I saw I mattered. I saw I had the power to create happier moments for others and literally turn frowns upside down. And when you see that you’re capable of this, you can’t not see that you are worthy and deserving of love, including your own.

You can try this too with as much as a simple genuine compliment.

6. Practice gratitude for who you are as a human being.

In today’s world, we’re so used to looking at things from the outside in. I didn’t (and still don’t) want to feel my worth based on my looks. Our looks fade. Our soul never does.

I knew this but didn’t know how to really feel it until I began making notes of why I appreciated and liked myself, on a soul-level. Not on the superficial level. For example, I began writing down things like, “I appreciate that I have such a deep capacity to feel.” This was such a simple, yet transforming exercise.

You can begin to create this practice too. Every morning or evening (whatever feels best to you), in a journal, bullet-point a few things that you appreciate about your soul self that are unique to your last twenty-four hours.

The point is that your gratitude focus here is inward. You’re appreciating the qualities that make you uniquely and beautifully you. And you’re showing up daily to shine some light on them. And yes, know this may feel odd at first, but over time, it becomes easier, and naturally this appreciation of who you are positively changes your self-worth.

7. Realize everyone has their own struggles.

I had always known everyone had their own struggles, but I hadn’t fully internalized it. When I began creating a new tribe of souls who appreciated me, lifted me up, and who made me feel safe, I was able to talk about some of my struggles with loving myself and feeling worthy.

When I did this, others began to open up about their own struggles with self-worth. This made me feel less alone, and ironically, made my self-worth soar through the roof because by simply being open, I was able to help others move through their own self-worth struggles.

Here, I saw that I wasn’t alone and that I had more power than I thought. You do too.