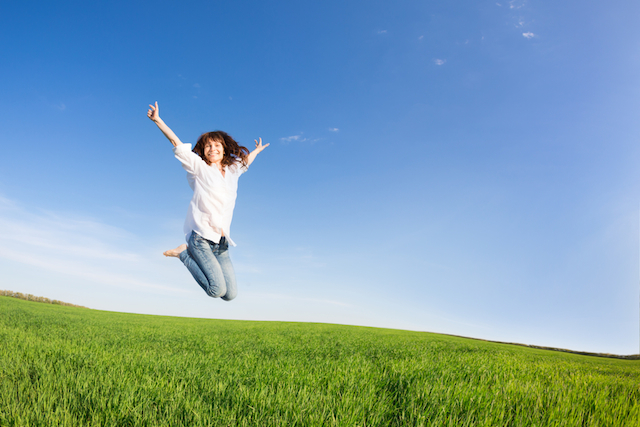 “Change your thoughts and you change your world.” ~Norman Vincent Peale

I used to watch people on the streets and in restaurants and think that their boisterous conversations and broad smiles were evidence that they lived a life much better than mine.

I assumed that they were happier than me, smarter than me, and worth more than me. All around me was evidence that this was true: my meager bank account, my junky car, my thrift store clothes.

I would sit in my apartment and try to imagine what it would be like to be someone else.

I wondered what it would be like to be someone who could afford to go to the movies and go out to eat, someone who bought new clothes and shoes, or someone who had a good job. Even imagining this seemed too hard. I felt as if life was stacked against me.

I was always a dreamer with big ideas and ridiculous plans, but I was unable to make those plans a reality because the story I told myself was that I wasn’t enough. As long as I continued to tell myself that story, I would continue to be not enough.

The current state of your life is a direct result of the stories you tell yourself, and what you really believe is possible—not what you say is possible, but what you believe deep down in your core.

My story about not being good enough showed itself in every aspect of my life—my job, my family, my social life.

Until I was able to open my eyes and change my story, these aspects of my life were not getting better. You receive what you are telling your subconscious mind you deserve. I was telling my mind that I wasn’t good enough and that’s what I saw all around me.

If you change the limiting stories you tell yourself, you will be able to change your life.

I realized this one day when I was watching a Tony Robbins video on YouTube. Yes, I’d heard it plenty of times before, but for some reason on that day, at that time, it really clicked. You will learn the lessons you most need when you are ready for them, and I was finally ready.

The first step in changing a limiting belief is identifying it.

Identifying my story about not being good enough was surprisingly difficult for me initially because I told myself that story for so long that I didn’t think of it as a story at all. I thought of it as true and that was, at its heart, quite ridiculous. It took a lot of thought before I even realized that this was the story I was telling myself.

All of these things are stories. The difference between you and the people doing the thing that you’ve always wanted to do is the stories you tell yourselves. Changing that story is one of the most important steps to changing your life.

Now that you’ve identified your story, you have to make a new one for yourself.

For me, it was simply deciding that I was just as good as anyone else and I deserved just as much as anyone else. It’s a really simple non-specific story, but it countered my previous limiting one. Think about your limiting story. How can you change that story to make it empowering?

A new story in itself is not always enough. That story needs to be rooted in something. You have to believe it, and changing your beliefs can be the most difficult thing of all. When I decided to change my story about myself, I looked around at my life for evidence that the new story was true.

For example, I knew I had friends and family who loved me and certainly thought I was good enough to receive that love.

When I looked at my life objectively I realized that I’d actually accomplished quite a bit. I’d always done well in school. I’d written quite a large body of work that I enjoyed and liked. I always went out of my way to be kind and helpful to others. These are all things that, in my eyes, made me just as good as anyone else.

As I started to look at my situation more, I realized that one of my core problems was “the anyone else” part of my story. I was comparing myself to others, and that will lead to unhappiness most of the time.

Instead of thinking of myself as just as good as anyone else, I started to change my story again to simply say that I am good.

Supporting your new story with facts will help you believe it, but what really anchors it into your life is associating it with positive emotions.

I started meditating every morning and every evening for twenty minutes. Once my meditation was over, before I got up, I’d visualize something that is connected to my new story. Because my story was so broad, that visualization could include any number of things.

I’d imagine these things very concretely. I’d really get into the visualization and wouldn’t get up until I felt the joy that these activities would bring me deep inside.

I am a writer and am prone to imagination, so this was quite easy for me. We all have the capability to imagine, so give it a shot and see what happens.

Nothing Happens Without Action

Sitting around visualizing isn’t enough to make change happen in your life. I’m a strong believer in action. That’s where you really start to see the change happen.

Now that you have a new story about your life, you’ll be able to see opportunities in places you’ve never noticed them before. You’ll also have the courage to try things that you never did before.

I immediately started challenging myself. I started making a conscious effort to speak up in social situations and to express my opinion. I started asserted my needs more. I was able to see things for a more positive perspective.

I’m not saying that I am always successful. I most certainly am not. Sometimes I fall back into old habits, but I remember that simply making the effort gets me a step closer to my ideal than I was before.

Be Kind to Yourself

The physical circumstances around you won’t change overnight. You won’t change your story to being abundant and then suddenly have millions of dollars in your bank account the next morning. What will happen, though, is that you will recognize the opportunities that will get you there.

Don’t be angry with yourself or the universe if it doesn’t happen fast enough for you, or if you fail to make the changes you want all once. Taking small steps in the right direction every day will get you were you need to be. It’s important to be consistent.

Don’t beat yourself up if you fall back into old habits. We are often our biggest critics. Just pick yourself up and start again. It’s the ability to continue moving forward that will get you to your goal.

Lovelyn Bettison is an author and artist who helps people conquer their fears and reclaim their dreams. She has made a worksheet just for Tiny Buddha readers to help you change your limiting beliefs and start the journey of change in your life. You can get the worksheet at her website.

When Your Beliefs Hold You Back: Release Them to Avoid Regret