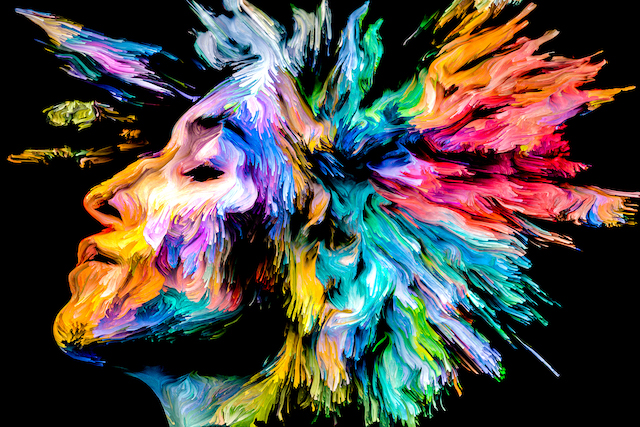 “The most positive action we can take about the past is to change our perception of it.” ~Deepak Chopra

A compassionate nurse set the tone and gently guided us through the ordeal. Mom, Dad, my other brother, and I spread out so that one of us held each of Chris’ hands and feet with a person at his head. Time passed in slow motion.

In horror, I watched for more than an hour as his breathing abated, with the pauses in between his raspy, strained breaths becoming longer and longer. I fervently sent him love and light and wished him peace as I watched the scene unfold through my tears.

Chris’ lips were chapped and cracked from breathing oxygen through a mask for weeks. A piece of skin on his upper lip fluttered with each breath, but in the prolonged pauses between breaths, it lay still. Each time the skin went inert, I thought, “This is it.”

But he would take another shallow breath one more time until the flap was frozen and his chest motionless forever. Putting a stethoscope over his heart, the nurse said, “It’s awfully quiet in there.”

It was New Year’s Eve 1995. After two years of rapidly declining health, Chris, my brother with the wicked sense of humor, flawless taste, and the ability to make me believe he was invincible, succumbed to AIDs at the age of thirty-three.

In the years following his death, I numbly went on with my life, like I was supposed to, like I had to. Being the mother of two beautiful, energetic young boys, there was plenty to be happy about and thankful for, but I only grew more depressed as the gruesome scenes of Chris’ sickness and death played on an endless loop in my head.

As time passed, Chris became a distant memory, like a book I knew I’d read once but couldn’t quite recall. I knew how the story ended, but the details were blurred behind a cloud of hurt.

Over the years, the highlights reel of the ugliness from my eighteen-year marriage and divorce got equal mental airtime along with the drama from a subsequent tumultuous three-year relationship.

Eleven years after that New Year’s Eve in the hospital, I found myself a depressed, divorced, single mother with no idea who I was or why I was here.

I couldn’t find anything resembling the strong, smart, feisty sister Chris had loved. In a pill-popping stunt, I tried to commit suicide, which only made things worse—much worse—resulting in a serious brain injury and losing custody of my boys.

While healing from the suicide attempt, I realized that I had been torturing myself with the painful memories. I was doing it to myself! While this point may be apparent to some, it was a huge “aha” for me, and I also realized that if I was doing it, I could stop it.

Yes, Chris died and went through a horrible illness. Yes, there were many messy times from my marriage, and hurts from the following relationship. All of it really did happen—no denying that—but I was the one keeping the pain alive and bringing it into the present.

It really boiled down to making the decision not to do this to myself anymore.

Because of neuroplasticity, the scientifically proven ability of our brains to change form and function based on repeated behaviors, emotions, and thoughts, the more I dwelled on the sad memories, the more I reinforced them.

“Neurons that fire together, wire together.” This saying, from the work of Donald Hebb, means that synapses, the connections between neurons, get more sensitive and new neurons grow when activated repeatedly together.

Our brains also add a subjective tint to our memories by subconsciously factoring in who you are and what you believe and feel at the time of the recollection. The act of remembering changes a memory. So, as I became more depressed and hopeless, the memories became darker.

But the good news is that the reverse is also true. Neural connections that are relatively inactive wither away, and a person can consciously influence the process in a positive, healthier way. I made the memories stronger and more painful, and I could make them weaker and more loving.

Through mindfulness and meditation, I learned to become aware of and take control of my thoughts and mind. By realizing my subconscious influences and consciously choosing which ones I allowed to have impact and intentionally inserting new ones, I changed my past.

Not literally, of course. But by pairing more positive thoughts and emotions with negative memories and feelings and modifying my perspective about past events, I changed their role in my present, which, in turn, altered my brain and life for the better.

The goal is not to resist painful memories or experiences and grasp at or try to force positive ones instead. That’s almost impossible and leads to its own kind of suffering.

In his book, Buddha’s Brain: The Practical Neuroscience of Happiness, Love, and Wisdom, Rick Hanson writes:

To gradually replace negative implicit memories with positive ones, just make the positive aspects prominent and relatively intense in the foreground of your awareness while simultaneously placing the negative material in the background….

Because of all the ways your brain changes its structure, your experience matters beyond its momentary, subjective impact. It makes enduring changes in the physical tissues of your brain which affect your well-being, functioning and relationships.

If your head is filled with painful memories of the past, I want you to know that you can change this! I did.

I certainly still remember Chris’ tragic illness and death, but I choose to focus on the times we laughed so hard that we got the “gigglesnorts.” I prefer to see him on the dance floor working up a sweat. I recall how much he loved me and that adored feeling I had when I was with him.

I even view his death differently now. Instead of feeling the horror and shock of that night, I can now feel the love and support for him and one another in that hospital room.

In any life, past and present, there’s always going to be pain, joy, and everything in between. Your experience of your life and your brain are shaped by what you choose to focus on. You can torture yourself with the past or choose better feeling thoughts and memories.

It really is that simple. Simple, but not easy.

On her blog, The Best Brain Possible, Debbie talks about how she recovered from depression, a suicide attempt, and resulting brain injury to rebuild her brain and life to find joy and tells you how to do the same.  Connect on Facebook and look for her upcoming memoir, Sex, Suicide and Serotonin.  If you're an interested agent, please contact her.

Overcoming Tragedy: 3 Ways to Create Your Own Silver Lining