Grieving a Loss That Feels Like a Death
By Brisa Pinho 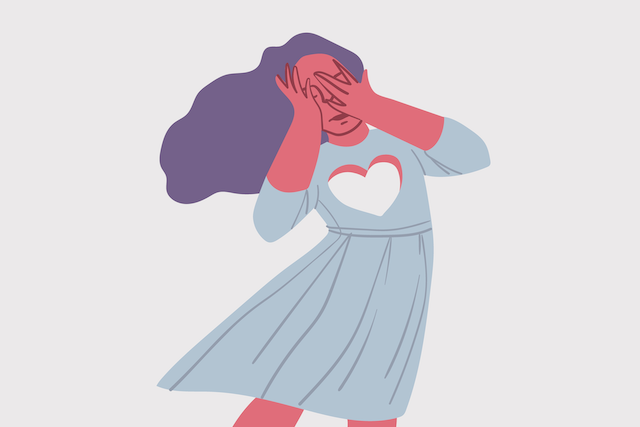 “Grief is like the ocean; it comes on waves ebbing and flowing. Sometimes the water is calm, and sometimes it is overwhelming. All we can do is learn to swim.” ~Vicki Harrison

Most grief books are written to help you mourn the death of a loved one and learn how to deal with their absence in this world.

Death is probably the most challenging thing a human can face. It breaks us down. It brings us to our knees. Some people are so significant in our lives that the mere thought of living without them feels incredibly overwhelming and incapacitating.

Losing someone we love is hard. Accepting loss is extremely challenging. So how do we cope with yearning and adapt to the emptiness following a divorce or huge breakup without feeling like a loser or the psycho who cant let go?

It’s an unfair misconception to think that those who have a hard time letting go or are taking longer than usual time to move on are somewhat weak.

Psychology agrees that when a major relationship or marriage ends, the person who was left may feel grief as painfully as someone who lost a loved one to death. Sometimes the pain can even be stronger.

Divorces and breakups can sometimes be worse than death, because the person who died to us is very much alive, haunting our every thought.

I remember how lost I felt right after Mr. Big broke things off with me for the 87th time. I remember packing my car with all my belongings and driving from San Francisco back to Los Angeles with our eight-month-old son in the car crying the entire six hour drive.

I felt as if he had died. My whole world collapsed. I was terrified that I wouldn’t be able to support our son.

I wondered how he would turn out without his father in his life. Would he feel unloved? Would he wonder why his father cut him off his life? Would he blame himself or think he wasn’t good enough for his dad?

So many questions rushed through my mind while I drove through the vast freeway back home.

I felt humiliated. I felt alone. I felt a variety of feelings and emotions. But the one that I always remember is the feeling of loss. I had lost everything I ever thought I would eventually have. The family, the life and most importantly: the man. The man I had loved for five years had died.

His body was still there but his soul was gone. Everything I ever thought of him was gone. His words were gone. His spiritual presence was gone.

There is a lot more to life than a physical body. Millions of people have experienced the death of their loved ones without ever having to plan their funeral.

When I arrived home it was time to pick up the pieces and move on. At least that’s what everyone around me was telling me.

They expected me to shake everything off and move on with my life as if my son’s father didn’t exist. As if our story didn’t happen. But accepting the death of someone in our lives is a process.

I kept going back and forth between missing him and hating him for leaving. At times the mixed emotions felt like I was literally sinking into insanity. One moment I would cry and the next I would yell.

Nobody told me that grief does that to people, and because I didn’t know what I was feeling was normal, I felt even more alone.

I had never heard of the five stages of grief until I went to see a therapist, because the pain was so unbearable. It’s then I learned that a person goes through denial, anger, bargaining, depression, and acceptance after the death (or loss) of a loved one.

Unlike what I originally believed, there is no specific order to these feelings. You may feel as if you are on an emotional rollercoaster as you are jumping from stage to stage. Its important to know that this emotional ride is normal, and if you get the proper help you will get off of it alive and stronger.

I know what is like to lose twenty pounds in six weeks, to lose friends and to lose your dignity begging someone to take you back. I know the feeling that the world has ended and you were left behind alone and miserable.

I have been there, so believe me when I say that there is hope.

There is, in fact, a light in the end of the depression tunnel. But the only way to get to that light is to walk through it. There is no way of getting around the process, and the earlier you begin the journey of mourning and healing, the sooner you will reach peace.

The journey is long, but there is no race and no competition. It’s a journey with yourself. There will be days when you will feel stronger than ever and some days will bring you back to your knees.

Just remember: The rollercoaster is the journey. So even when you are down, feeling as if you’ve made no progress, remember that progress is being made every day you choose to be alive.

Progress is being made every day you choose to not call the one who left you.

Progress is being made every day you choose to take another breath.

You are alive. You are strong. You will survive.