Growing from Ghosting: 5 Things To Consider While Dealing with Silence
By Sarah E. Miller 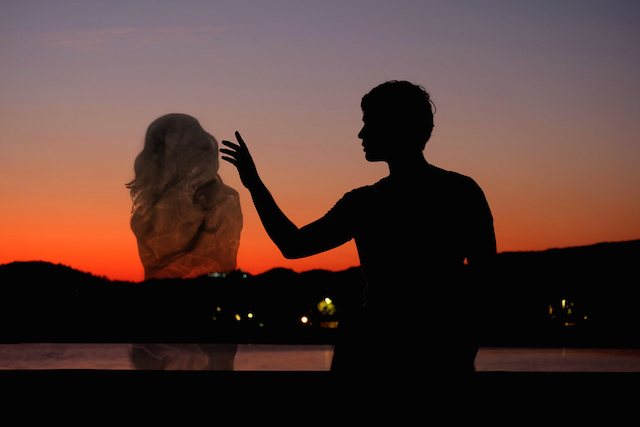 “The important thing to remember is that when someone ghosts you, it says nothing about you or your worthiness for love and everything about the person doing the ghosting. It shows he/she doesn’t have the courage to deal with the discomfort of their emotions or yours, and they either don’t understand the impact of their behavior or worse, don’t care.” ~Jennice Vilhauer

Let’s get this out of the way first: Ghosting is crappy etiquette. There’s no real, concrete excuse for it, except perhaps pure, unadulterated laziness with a touch of cruelty.

We take for granted how much technology has changed the way we interact with people. We are humans first, but it seems we may be conflict-avoiding robots second. Efficiency and avoidance reign supreme in this futuristic dating world of 2017, and because of how easy it is to disregard anything and everything, common courtesy has now become painfully underutilized.

To be frank: it is exceptionally easy to ghost someone who has no connection to your life previous to the one encounter. If you aren’t feeling it with this new person, and you don’t want to use the mental leaps it takes to articulate a rejection to a practical stranger, then more likely than not you won’t communicate at all.

Access to the ignore button has never been easier, and pressing “unmatch” on Tinder equates deleting the person from your headspace and your own personal universe. Here are five things to consider in the land of ghosts.

1. What do you really want from the person who’s ghosting you?

In the land where easy hookups are abundant, polyamory is normal, and ethical non-monogamy sounds like something you’d see at a farmers market, here we all are, trying to figure this new world of dating out. With each generation of dating (and dating apps), we are met with new terminology, new hats to try on for ourselves, and we’re re-focusing our energies on what we are really looking for.

I am a monogamous person. That doesn’t mean that in my fifty-plus first dates, I haven’t been able to recognize some of my own awful behavior (long, dramatic paragraphs of anxiety-ridden texts to a new potential date, anyone?), so I’ve had to reexamine myself a multitude of times, take a major chill pill, and reorganize my needs and desires.

That being said, asking myself, “What am I really looking for?” after I get painfully ghosted is seemingly the best question to ask.

Why exactly was this painful (beyond it being inhuman and previously nonexistent before modern day dating)? Did I just want acknowledgement of my humanity? Closure so I can focus on the next person? Did I even find this person particularly interesting? What other things are going on in my life that are causing me to react so strongly?

Yes, monogamy is important to me, but getting overly upset about a person who feels no attachment toward me is a new kind of character building experience. Ghosting is a reminder that life is unfair and often severe. Technology has made communicating with each other easier to access, and yet has created a strange isolating landscape in which we are all a part of.

This feeling of desertion still applies to people who have been ghosted after several dates, or friendships that have suddenly and painfully disappeared; it just becomes more painful and potent.

2. The sea of excuses don’t feel any better than being ghosted.

I got on my old OKCupid account a couple years after being off. In a cruel twist of fate, I saw a sea of all of the men that I dated previously. We were all in this together, apparently, like some sort of sad loner club no one signed up for.

Here we were, the men that ghosted me and the men that like to me too much, and I didn’t feel the same. Somehow, after years we were all still here, and all using the same tired profile pictures.

After a few days, a man messaged me a lackluster apology that he ghosted me as he was going through “some stuff” at the time. And with that, he walked back into the internet, never responding my follow-up questions. Gee, thanks, I’m glad I could be a vessel in which you exonerated yourself from your strange guilt.

Does it feel better that he weakly apologized and gave a vague excuse for his behavior three years later? Not particularly. So, expecting any explanation at a later time isn’t helpful in this ghosting journey that we are all on.

More common than ghosting, here are some boring/obvious excuses I have heard instead of being ghosted, and they feel about the same as the disappearing act itself. In no particular order:

“You lied on your profile. You said you were 5’8”, but you’re taller.” (He says, as he lied about his own height, weight, blah, blah, blah. For the record, I’ve been 5’8” since I was twelve, unless I had a spontaneous growth spurt at thirty.)

“I didn’t sense a connection.” (He says, as he talked at me the entire time, completely unaware that I actually possessed a personality that he didn’t want to take part in.)

People are either desperate or not desperate enough. This ebb and flow of dating is equal parts predictable and surprising. Protect your heart, date whoever you want, but know that you will eventually get your feelings hurt. Whether it’s half-baked excuses, or radio silence forever. You know the saying though: better to buy a ticket to the lottery than never to have played, right? RIGHT?

3. Know that you may ghost someone yourself.

Even I, Queen of All Emotions, have accidentally ghosted someone before.

Have you ever met someone so unremarkable you just simply forgot about them? You sat there during your date shrugging your shoulders, stirring your iced tea, wondering if this person had a pulse.

He stared at me blankly, asked me what I did, and I felt as if I was in a weird, monotone interview for a job that I didn’t remember applying for. As careful as I am, I accidentally ghosted someone and they were sad about it. I couldn’t even bring myself to apologize in fear I would open up the strange waves of communication with this person again.

It happens. I get it. It’s a two-way street and I’m human enough to realize my shortcomings. I’m sorry, Kevin. Or was it Brian? James? Steven?

4. You cannot educate a ghost.

This may be the most important realization on my journey through ghost country: You simply cannot educate a ghost. There will always be people perpetuating this stereotype of non-consideration (maybe even you!).

These people are not in your control. Sending them a “wake up call” does not work. It’s not your job to educate them.

This idea has been the hardest thing for me to accept. I have sent paragraphs of texts to men who have ghosted me. This only solidifies the silence. Obviously the person is not texting you back if you’re going to badger him on his shortcomings.

Maybe they’re going through something, you’re not on their mind, they don’t care in the slightest, or their phone was eaten by an alligator. Whatever the case may be, they don’t care enough to contact you, so your novel of setting the balance right in the world will go to blind eyes. It will drive you insane if you allow it. Do not allow it.

As long as you’re honest with yourself about your needs, somewhat earnest in whatever you’re trying to accomplish datingwise, then you can overcome this. It’s all you can do. Getting ghosted means actively becoming a stronger, wiser person, because the alternative is bitterness and never ending frustration.

Technology is still the Wild West of communication. We know how to correctly formulate an email to our boss, a job prospect, your great aunt Mabel, but to someone who is virtually meaningless to us, it’s becomes considerably more of a gray area.

In general, people just don’t know how to socialize properly in a digital format, so we have created a culture where we simply don’t. And because this was a casual encounter, saying something at all could put us in a situation where the other person over-compensates with their hurricane of emotions if the feelings weren’t mutual.

Know that you’re putting in the effort. Know that if things are supposed to work out they will work out. Find a mantra, yoga, meditation technique, eat a giant plate of pancakes, do whatever makes you feel better to get over the first few hurdles of the unavoidable ghosting epidemic.

No one ever promised us that dating was always going to be enjoyable. The funny anecdotes in romantic comedies make it look like a barrel of laughs, but sometimes it simply isn’t. Accepting this is an unfortunate part of the trade off of putting yourself out there is like learning a tedious aspect of your job. You’re going to hate it at first, but if you still want to date, this is part of the job description.

In other words, be brave, certainly put yourself out there, but also send only one follow-up text, otherwise you will drive yourself into certain madness.

Sarah E. Miller is a freelance writer, dabbler, collaborator, and an occasionally funny lady. She spends her days writing for various blogs, dreaming up big ideas and trying to put those dreams into action. To learn more about Sarah, visit her website sarahdoesitanyway.wordpress.com.

Knowing When to Let Go of Relationships: 3 Signs It’s Time to Move On