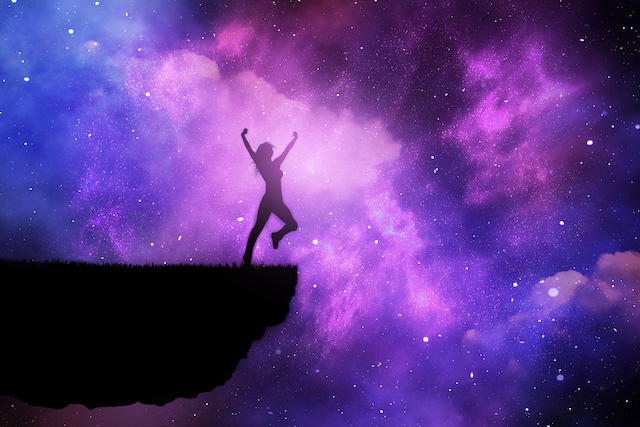 “Acknowledging the good that you already have in your life is the foundation for all abundance.” ~Eckart Tolle

It was perfect. Well, almost.

I was doing the work I love, with someone I love, my two boys were thriving, and we seemed to finally be on the road to retirement. What could possibly be wrong with this picture?

Anxiety crept into my mind and contracted my body before I had a chance to get ahead of it. It was an unease that something just wasn’t quite right. And if it was, then it wouldn’t be for long.

I knew enough about neuroscience and anxiety to know what was happening.

Negative thoughts are a protective pattern that come from scanning our environment for potential threats.

Our ancestors were wired this way to survive, thankfully, and we are probably in the first generation that can even talk about the word “abundance,” at least in this part of the world. The intergenerational trauma of feeling unsafe is in the recent past and runs deep in our DNA, especially for women.

But even armed with all the knowledge of trauma and all the best practices of breathing, meditation, and yoga, there was still a missing link.

My worries seemed trivial given the war that was raging in the world. It seemed self-indulgent to want more, to even consider that this was not enough. Even when it felt enough, it was because all the factors were lining up in that moment, but it felt precarious, like a house of cards—even though I knew it wasn’t.

All the self-help books promised I could “reach for my dreams” and “have my best life ever” if I only changed my habits and my mindset and lived like I thought all the people around me were.

In fact, I was so busy working on my life that I felt exhausted and still felt like I wasn’t doing or giving enough. Even when deciding what charity to donate to, to help those in need, I felt like I had to choose the “right” one!

It was through my work with people in chronic pain that one day something shifted. I was teaching about the difference between acceptance and giving up in the search for a cure, and I said something like “It’s not so much what you are doing but how you are doing it.”

Doing something from a place of pressure and intensity, with a worry about making a mistake or not getting it right, creates fear. Fear creates more fear in the end, and it creates pain.

My inner perfectionist gasped and took a step back. She was outed.

Not only did I see how my inner perfectionist had been running the show, I knew that if I wanted to negotiate with her, I was going to have to come from a different energy other than “getting this right.”

She had helped me; she had worked so hard to stay on top of everything and got me through some tough times.

She had guilted me when I felt like a bad mother, a bad friend, a less-than therapist, or a mediocre spouse and showed me all the ways I could be better. She even lent her expertise to my family, telling them how they should behave, what they should eat and not eat, and how they should conduct their lives.

This was sometimes done directly, but she also worked coercively behind the scenes through people-pleasing, manipulation, and other passive-aggressive behaviors.

She was based in fear and shame as a trauma response, learned early on in my childhood years, that told me my authentic self was clearly not good enough. So I employed her services to keep me safe, help me fit in at school, get good marks, and be an all around “good girl” on the outside. But the inner pressure of a perfectionist is unbearable and soon morphed into an eating disorder when life felt out of control.

Many of us live in a nasty triangle that can be difficult to see and even more difficult to disrupt. It goes: shame-inner critic-perfection, and it balances itself precariously inside our mind and body leaving its imprint of “not good enough” to guide our lives.

This is compounded by a culture that primes us to feel like we’re not okay and there is always something to buy, change, or fix, because it is not normal to just be okay.

Even though my trauma happened decades ago, the vestiges remained. I could not quite relax into my life without something or someone, mostly myself, feeling “not quite good enough.” I also found this same core belief to be at the root of many if not all of my clients’ struggles with anxiety, depression, and chronic pain.

It was the constant feeling of being here but wanting to be… somewhere or someone else. A knee-jerk resistance to life or an inability to truly sink into all life has to offer without finding fault or a hiccup somewhere. Or worse, thinking that I had to earn my worth by doing more and being more, and all without effort!

Not good enough for what? For whom? This is an unanswerable question because it is a lie. But it is one thing to know that and another to let my inner perfectionist know I was safe now and she could take a backseat because, well, I’m good enough.

I thought about the times I felt free and at peace.

I thought about the people I knew whose lives had the biggest impact on me.

I had a chat with my future self twenty years from now about the qualities she had, how she moved, and what she valued.

And it came down to a word: simplicity.

Here is where I had to tread carefully. My inner perfectionist would make finding simplicity very, very complicated and approach it with an all-in attitude, as she did everything: live in a tiny house, two chairs, two sets of cutlery, and a bed.

No, there had to be another way, an easier way.

It turns out, it was the easiest way possible: Embrace what is here now.

It felt radical, revolutionary. It felt like I was disrupting all my programming about what it means to live a good life. It was not the energy of giving up or rationalizing that I didn’t deserve more and I should settle for less. It wasn’t even the energy of gratitude or appreciating what I have and how privileged I am.

It was the opposite.

Embracing my life as good enough busted the myth of inferiority and superiority that tells us some people are more or less worthy than others. It let me relax into the fact that we are all doing the best we can with what we know at that moment. If I was good enough, then others were too.

It busted the myth of needing more and being more, because I didn’t have anything to prove to anyone. It also busted the myth that if I truly accepted my life as it is, I would just lie down on the couch and never get up. Again, the opposite happened.

Energy was freed up for more of what I love, not what I should do. Worry and struggle were replaced with self-forgiveness.

Embracing my life as good enough gave me the doorway I needed to a quality of life I couldn’t imagine.

I realized I was good enough to show up just as I am.

I realized I was good enough to set boundaries around what and who aligned with me.

I realized I could write, speak, and create in a messy, fun, good enough way.

I realized I was good enough to rest.

I realized I was good enough to embrace my own wants, needs, and desires.

I realized I was already good enough for pleasure right here and now in a million ways I couldn’t see before.

I realized my life was not about being better, improved, fixed… it was about being who I am, and that was enough.

I realized I could work less and make more money.

I realized my body was a remarkable organism that was to be loved and held, not manipulated.

I realized that every decision I made was right for me because it was good enough.

I realized that struggle was never meant to be my life, but giving, loving, and contributing were.

I realized I was already good enough to live a life of joy, comfort, and ease.

One of the most beautiful parts of this is looking in my children’s eyes and knowing that they, too, are so perfectly good enough just as they are. They don’t need to prove their worth to anyone.

Embracing my good enough life has allowed me to enter my life, just as I am, and has turned “good enough” into “how good can it get?” It gave me the safety I needed to “do what I can, with what I have, where I am” (Theodore Roosevelt).

Can you imagine a world where everyone knew they were just good enough? Where we all lived life from a place of forgiveness, grace, and compassion for ourselves?

What are you already good enough for that life is just waiting to give you?

Madeleine Eames is founder of Mindful Living Now, which helps people heal trauma and chronic pain and realize their worth through counseling, breathwork, mindfulness, and yoga. Join her in the quest to reclaim our lives at mindfullivingnow.com or on Facebook or Instagram. Join Madeleine’s next online retreat Good Girl to Good Enough.

3 Ways to Help Someone Who’s Recovering from Trauma